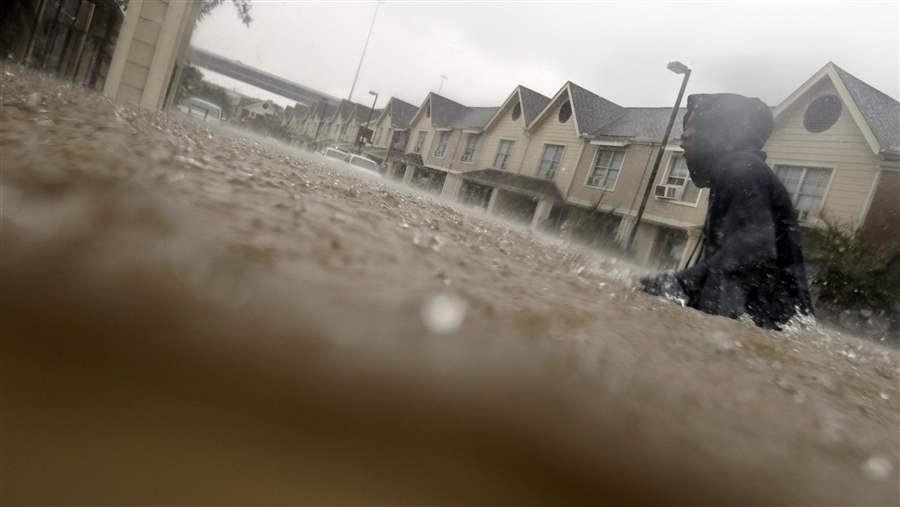 Franklin Halloween, 16, wades through floodwaters during Tropical Storm Harvey to check on neighbors at his apartment complex in Houston on Sunday.

Note: This post was updated Aug. 30 to correct the damage costs and number of insurance claims from Hurricane Ike and Tropical Storm Allison.

With Tropical Storm Harvey continuing to unleash unprecedented rainfall across the Houston region and other Texas communities, it is clear that this storm will go down as one of the most destructive weather events ever to strike the United States. President Donald Trump has authorized emergency aid, and local, regional, and federal disaster relief teams are focused on ensuring the safety and security of the millions of people directly affected by Harvey. But for many of those afflicted, rebuilding their lives may take years.

When Congress returns to work next week, therefore, its top priority must be appropriating sufficient recovery aid for communities battered and inundated by Harvey, which came ashore Friday as a Category 4 hurricane. Lawmakers also face the task of debating and reauthorizing the National Flood Insurance Program (NFIP), which expires at the end of September. The program, which provides federally backed coverage for homeowners and small businesses in more than 22,000 U.S. communities, is nearly $25 billion in debt.

So far, the presidential disaster declaration for Harvey covers 18 Texas counties where, according to an analysis by The Pew Charitable Trusts, just over 400,000 NFIP policyholders live. That’s roughly 16 percent of households in those counties.

While it is too early to estimate the breadth and costs of damage from Harvey, state and federal officials can draw on previous storms to get a sense of what this catastrophic event may mean for the NFIP. Two of those cyclones left trails of destruction in Texas: After Tropical Storm Allison in 2001, the program paid out more than $1 billion to settle upwards of 30,600 claims in Texas. And following Hurricane Ike in 2008, some 46,600 NFIP claimants received $2.7 billion to help them rebuild their lives.

Within the 18 Texas counties most impacted by Hurricane Harvey, only 16% of households have flood insurance.

Extreme weather events are increasing in frequency and intensity in the U.S., and flooding is the most costly natural disaster in the country year after year. It is therefore imperative that Congress use next month’s deliberations to put the NFIP on a financially solvent path. This can be accomplished by amending the program to require improved community preparedness and flood maps, reduced building and rebuilding in flood hot spots, a national flood-risk disclosure standard for sellers, and increased investments in pre-disaster mitigation.

Harvey has redefined what we know is possible in terms of flooding. Right now, Congress has no more important task than helping communities in Texas along the slow road back to normalcy. But to give all Americans, and the federal flood insurance program they count on, a fighting chance to prepare for and recover from future storms, lawmakers must make strategic, meaningful reforms to the NFIP.