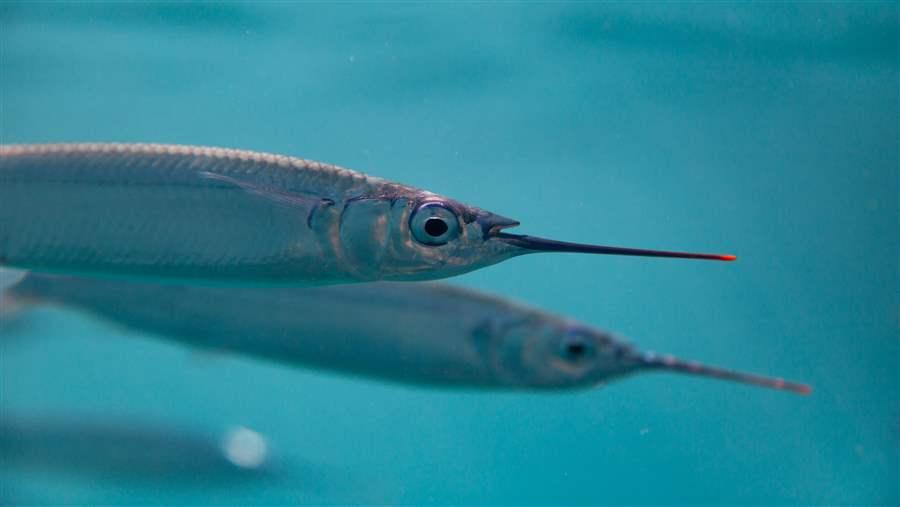 Ballyhoo are among the more unusual forage fish species now protected from overfishing in the U.S. mid-Atlantic region. Ocean predators, such as seabirds and larger fish, prey on ballyhoo.

Forage fish, the small species that support the marine food web, won new safeguards along the U.S. Atlantic coast on Friday. The National Oceanic and Atmospheric Administration’s Fisheries Service (NOAA Fisheries) announced a final rule directing fishery managers to create science-based measures, such as catch limits, before fishing can begin in federal waters (from 3 to 200 miles offshore) on more than 50 species not already targeted by commercial fishermen. The rule will also help ensure a steady supply of forage fish for the many predators that feed on them, such as striped bass, bald eagles, and humpback whales, and increase security for businesses that depend on healthy ocean systems.

The rule was developed by the Mid-Atlantic Fishery Management Council, which consists of 21 representatives from seven mid-Atlantic states, commercial and recreational fishing sectors, the government, conservation groups, and academia, and largely reflects the version the council passed last year and sent to NOAA to finalize.

Sustaining populations of forage fish is a smart investment in American seafood, jobs, and ocean health. Sensible and far-sighted decisions like these can secure our country’s fisheries as among the most productive in the world.

That’s because when there are enough forage fish in the ocean, the overall ecosystem thrives, helping top predator populations flourish and increasing the yield of catchable fish. In turn, our country gains more seafood from our own waters, as well as expanded recreational and business opportunities. Among those whom this rule will benefit are commercial, recreational, and charter boat fishing operators and their customers; seafood restaurants and consumers; the bait, fish oil, and pet food industries; and other coastal and wildlife tourism businesses. 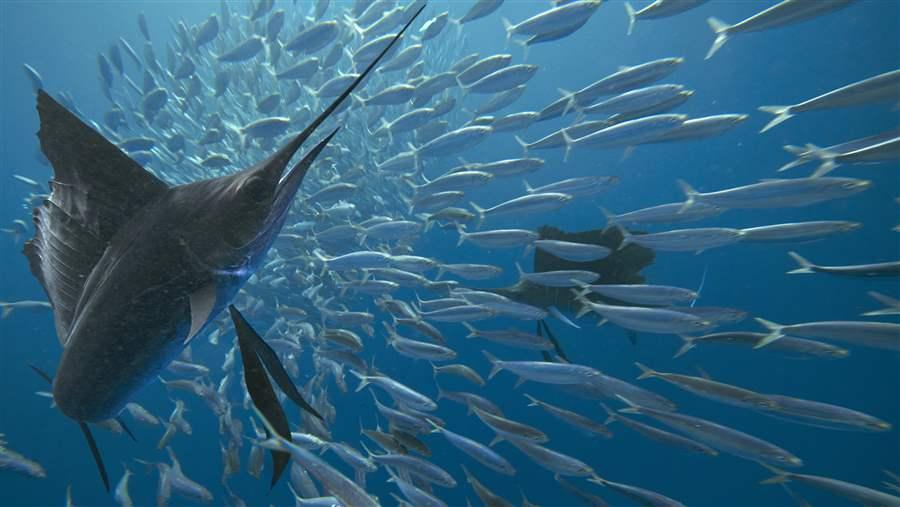 Two sailfish hunt a school of Spanish sardines. Despite their name, Spanish sardines are found in the U.S. mid-Atlantic and are among the forage fish species now protected from overfishing there.

Forage species are the unsung heroes that power America’s fisheries, consuming some of the smallest organisms in the ocean and transferring that energy to the largest predators. While the names of many of the mid-Atlantic species covered by the rule, including silversides, sand lances, and copepods, may be unfamiliar, these small creatures feed a number of recognizable crowd-pleasers, from bald eagles and humpback whales to striped bass.

Some forage fish are not fish at all: Krill, for example, is a crustacean, and sea butterflies are molluscs. Since the rule lists taxonomic families and orders, each of which includes numerous species, and because it applies to all marine species that are smaller than 1 inch when adults, it is difficult to say precisely how many species are covered by the rule. Most refer to the rule extending to at least 50 forage fish species.

The rule will also limit catch in the emerging fishery for chub mackerel, an important forage species for tuna and billfish, until formal management is in place.

The North Pacific and Pacific Fishery Management Councils also have passed rules safeguarding forage fish populations, but the mid-Atlantic is the first East Coast region to do so. Along with last year’s historic protections for deep-sea corals, the forage fish rule helps establish the Mid-Atlantic Council as a leader in big-picture fisheries management.

The Pew Charitable Trusts supports this kind of proactive and practical approach to protecting forage fish populations. Join us in thanking NOAA Fisheries and the Mid-Atlantic Council for listening to the diverse voices with a stake in how our country’s ocean resources are managed.

Forage fish, the small, often schooling species that support the marine food web, are now protected from unsustainable fishing along the U.S. Atlantic coast. Here are a just a few of the species safeguarded and the marine predators that depend on them.