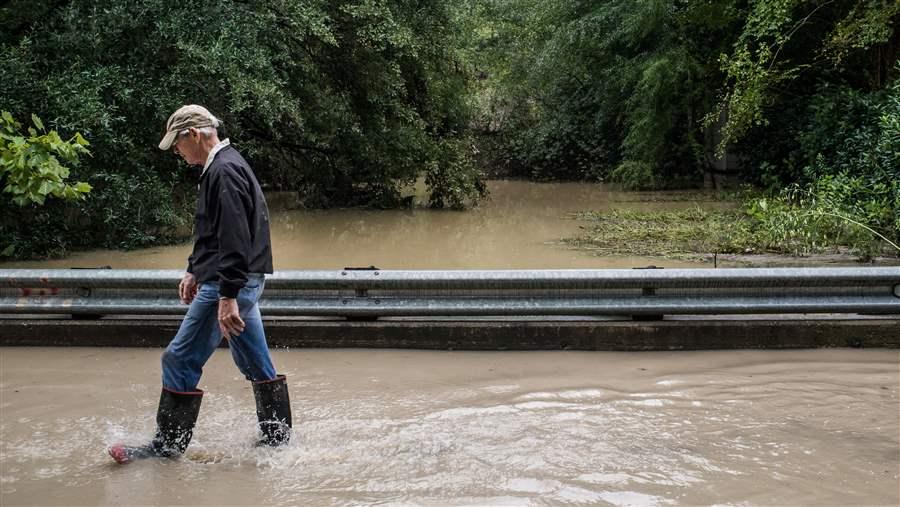 Eric Van Sant crosses a bridge in Columbia, South Carolina, where record rainfall in 2015 stranded motorists and forced hundreds of evacuations and rescues.

The White House repealed a federal standard today which required that bridges, schools, fire stations, roads, and other public infrastructure be built to withstand increasing flood risks. As the administration considers a plan to improve infrastructure, eliminating the Federal Flood Risk Management Standard means losing a prudent policy that would have reduced taxpayers’ exposure to damage caused by floods.

Since the late 1960s, federal agencies have been tasked with assessing and planning for flood risk as they invest in new infrastructure or rebuild structures after disasters. In 1983, the Federal Emergency Management Agency and the Office of Management and Budget endorsed the practice as a way to save taxpayer dollars.

Since then, losses associated with floods have grown, and large sums have been spent to rebuild or repair public infrastructure—sometimes multiple times. Ninety percent of all natural disasters in the United States involve flooding. These events claim lives and strain the capacity of government agencies and local communities to adequately respond and provide relief. American taxpayers have also felt the financial burden associated with floods, with damage costs in excess of $260 billion since 1980. The American Society of Civil Engineers recently gave the nation’s deteriorating infrastructure a grade of D-plus, underscoring the need for fiscally responsible standards to reduce the nation’s risk of flooding as infrastructure is repaired or upgraded.

The Federal Flood Risk Management Standard was updated in 2015 to lessen the impact of floods and reduce unsustainable development in flood-prone areas. Federal agencies were required to build and rebuild public structures based on the best available science to determine future flood conditions or based on an expanded definition of the flood plain.

That’s why The Pew Charitable Trusts urged the Trump administration to keep the standard in place. This pragmatic policy would have safeguarded taxpayer-funded investments in new or rebuilt federal infrastructure within flood-prone areas.

A recent Pew public opinion poll shows broad support for such a measure. Eighty-two percent of registered voters supported requiring that all federally funded infrastructure be built to better withstand the impacts of flooding.

With public infrastructure across the U.S. in urgent need of repairs and upgrades, now is not the time to reverse or undermine a commonsense policy designed to reduce the impact of big floods on life, property, and the federal budget.