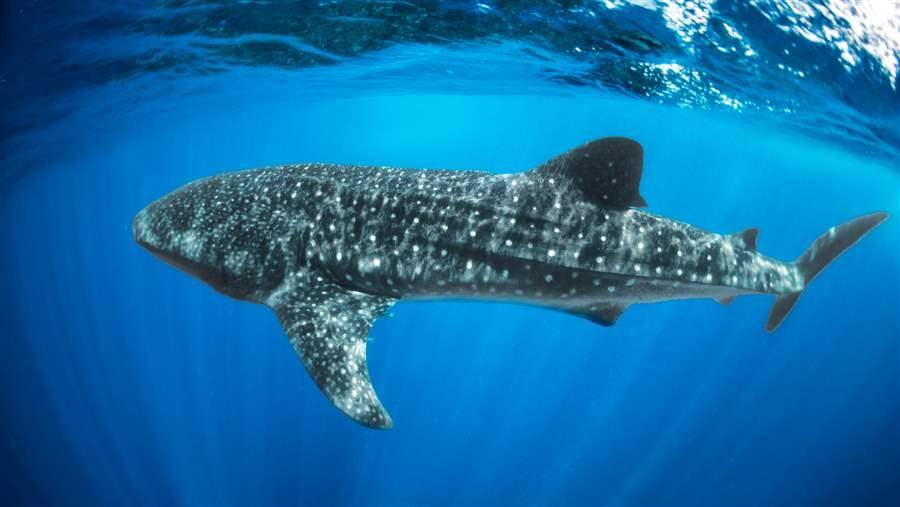 Species such as whale sharks migrate across the high seas in search of feeding and breeding grounds.

After more than a decade of talks, the United Nations has the opportunity to move forward with a new international treaty that would protect marine biodiversity on the high seas. These ocean areas, which lie beyond the governance of any one country, are critical to achieving the levels of marine protection that scientists say are necessary to preserve vital and sensitive ecosystems, especially in a time of climate change.

For the past two years, governments have met for a series of Preparatory Committee (PrepCom) meetings to discuss the key components of a high seas treaty, including how marine protected areas (MPAs) and fully protected marine reserves can be established in these ocean areas. Because there is no overarching governance structure in place to accomplish that objective, many governments hope to include in the agreement a mechanism that allows countries to cooperate on MPAs and other conservation tools for the high seas.

The mandate of the fourth and final PrepCom, July 10-21 in New York, is to produce recommendations to inform the forthcoming U.N. General Assembly decision on the start date of full treaty negotiations.

MPAs and marine reserves have in recent years proved their value as key tools in ocean conservation, and science has shown that the larger the protected area, the better.

Last month, a study published in the Proceedings of the National Academy of Sciences concluded that marine reserves are helping to mitigate the impacts of climate change. As the ocean warms, large-scale protections can help species and ecosystems build resilience and adapt to the changes, the authors wrote.

Other research shows a need to protect far more of the ocean. One analysis indicates that, in order to prevent further degradation and help support sustainable fisheries, at least 30 percent of the marine environment needs to be conserved in highly protected reserves. That percentage is far above the internationally agreed target set by the U.N.’s Sustainable Development Goal 14, whereby countries committed to conserve at least 10 percent of their coastal and marine areas by 2020. Currently, only about 3 percent of the ocean is considered fully protected, and less than 1 percent of that is in areas beyond national jurisdiction.

High-level support for a treaty

At the first-of-its-kind United Nations Oceans Conference in June, advocates such as Richard Branson and Leonardo DiCaprio emphasized the importance of high seas protections and echoed calls from governments around the world to launch the treaty negotiations in 2018. Such widespread support is the culmination of years of dedicated work and reflects a growing awareness of the need to protect more of the ocean before it’s too late.

The final PrepCom should be considered the “end of the beginning” in the pursuit of a new treaty. After years of informal discussions and preparatory talks, U.N. delegates are now on the verge of consequential action. To protect the future of the high seas, and the oceans as a whole, the PrepCom should recommend to the U.N. General Assembly that an intergovernmental conference begin as soon as possible.

Underwater Treasures of the High Seas

Unique habitats and biodiversity could be protected with a new U.N. agreement

Once thought to be largely barren, the high seas are now known to be one of the planet&rsquo;s largest reservoirs of biodiversity. Home to majestic whales, sharks, sea turtles, and other beloved and ecologically important species of marine life, the deep reaches of the high seas also support little-understood plants and animals as well as creatures not yet discovered.