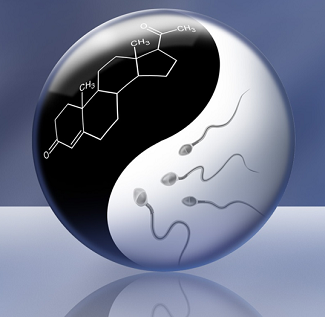 Compounds that structurally resemble the naturally occurring compound progesterone (illustrated above), such as lupeol or pristimerin, can prevent fertilization.

People have been searching for effective methods of contraception for centuries. Ancient cultures have thoroughly documented the use of plants with contraceptive properties to prevent pregnancies. However, science has yet to discover how herbal-based medicine can work as a form of birth control.

Pew biomedical scholar Polina Lishko, who holds a doctorate in physiology and biophysics, found that two plant-based compounds—pristimerin (extracted from the thunder god vine, a plant frequently used in Chinese medicine) and lupeol (found in mangoes and aloe)—block a key process that allows the sperm to penetrate the egg. She and her colleagues in the department of molecular and cell biology at the University of California, Berkeley published their findings in the May issue of the Proceedings of the National Academy of Sciences.

During the fertilization process, sperm cells beat their tails in a side-to-side pattern to travel long distances to the egg. Once they are close, sperm must alter their rhythmic swimming for a final “power kick” in order to break through the egg’s dense protective layer. When the sperm cell is in close proximity to the egg, the hormone progesterone binds to a channel in the membrane of the sperm, allowing a large amount of calcium into its tail, providing the force for the power kick.

Lishko and her colleagues report that because pristimerin and lupeol are compounds that resemble naturally occurring progesterone, they can compete with it to bind the channel—choking off the flux of calcium into the sperm tail. Thus, the switch that boosts the sperm into hyper-drive is blocked, preventing fertilization. Notably, these compounds worked even at low concentrations. They did not pose any harm to the sperm and left them still able to swim.

Unlike emergency contraceptives on the market today, the plant-based compounds could be used to prevent fertilization rather than halting the process after it occurs. Currently, there is little research on targeting this distinct step in the fertilization process. A new form of birth control may be on the horizon—one that can be used by both men and women to prevent pregnancies, with minimal side effects on the body.