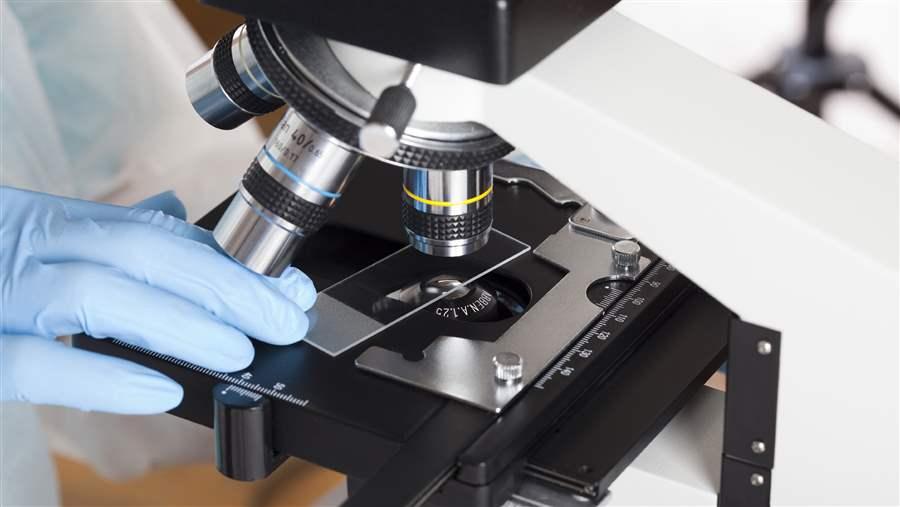 Participants in Pew’s biomedical research programs continue to make strides in their work.

Also in July, Andrew Huberman, Ph.D., a 2013 Pew scholar, published a study that described conditioning injured optic nerve cells to regenerate. Huberman’s research involved activating a growth mechanism in cells, called the mTOR signaling pathway, in the severed retinal ganglions of mice. He also repeatedly exposed the damaged eye to high-contrast oscillating black-and-white images. Huberman discovered that this regimen was able to trigger the once-injured retinal cells to regrow optic nerve fibers along damaged pathways to the brain, giving the mice limited eyesight. His research demonstrated for the first time that repaired retinal ganglion cells, when treated with combination therapy, have the capacity to re-establish connections to the brain to restore vision.

In October, Maria Barna, Ph.D., a 2014 Pew scholar, was recognized by the New York Stem Cell Foundation, the American Society for Cell Biology, and the American Association of Anatomists for her work on ribosomes in cell development and communication. Barna is an assistant professor of developmental biology and genetics at Stanford University who investigates how specialized ribosomes determine which RNAs are translated into protein. Her research focuses on delineating the differences in ribosome composition and activity in the various tissues of the developing mouse embryo—work that could shed light on birth defects and other developmental abnormalities.

Why exercise is good for the brain

Also in October, Pew Latin American fellow Matias A. Alvarez-Saavedra, Ph.D., published a new study that adds to a growing body of evidence that regular exercise not only brings about physical benefits, but also can have a tremendous impact on the health of the brain. Through his research, Alvarez-Saavedra saw the benefits of exercise therapy in mice that had an underdeveloped cerebellum, a region of the brain that plays an important role in muscular activity. Without any intervention, these mice suffered from a progressive loss of bodily movements and weight, had trouble walking, and only lived for some 25 to 40 days. However, when the mice were given the opportunity to regularly run on an exercise wheel, they were able to live more than 12 months—an astonishing result, suggesting that running was critical to their long-term survival.

Cholesterol as a key to combatting cancer

In March, Roberto Zoncu, Ph.D., a member of the 2014 inaugural class of Pew-Stewart Scholars for Cancer Research, and his colleagues described their discovery of a process by which lysosomes—cellular structures that specialize in storing, releasing, and processing cholesterol, among other nutrients—relay the availability of cholesterol to control cell growth via a nutrient sensor called mTOR. This discovery provides insight into how cells regulate growth based on their ability to sense the nutrients we consume. Additionally, Zoncu’s research shows how abnormalities in cholesterol sensing might increase the prevalence of illnesses characterized by inappropriate cell growth, such as cancer and metabolic diseases.

In June, 37 new scientists will be welcomed into Pew’s biomedical research community— individuals who are pursuing creative ideas and using cutting-edge techniques to make contributions to all aspects of human health. Like their predecessors, these researchers’ journeys to answering some of the most fundamental scientific questions about human health and disease are sure to be illuminating and innovative.