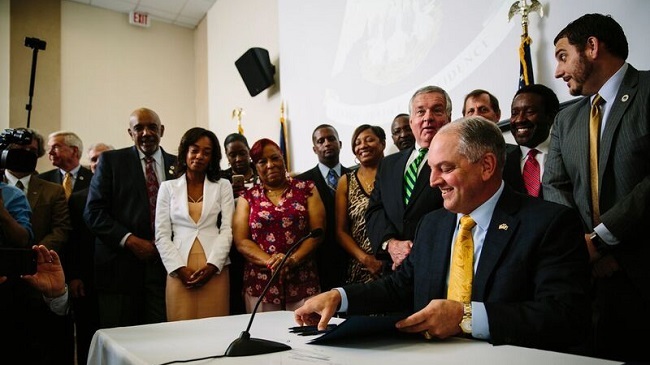 Governor John Bel Edwards (D) signed a broadly bipartisan package of 10 bills June 15 that aims to reduce crime and incarceration by steering less serious offenders away from prison, strengthening alternatives to imprisonment, and clearing away barriers to success during re-entry. With these changes in sentencing and corrections laws, Louisiana is likely to shed its title of the most incarcerated state.

Louisiana officials project that the reforms will reduce the prison and community supervision populations by 10 and 12 percent, respectively, and avert $262 million in prison spending over the next 10 years. Seventy percent of the savings—an estimated $184 million—will be reinvested in programs in jails and the community that reduce recidivism and in services for crime victims.

Six Republicans, including Senate President John A. Alario Jr., two Democrats, including Speaker Pro Tem Walt Leger III, and one independent sponsored S.B. 16, 139, 220, and 221, and H.B. 116, 249, 489, 519, 680, and 681. The package also garnered endorsements from the state District Attorneys Association, business and faith leaders, and coalitions of advocates and community members spanning the political spectrum.

The reform package includes reductions in probation and prison terms for drug, property, and other nonviolent crimes; elimination of mandatory minimum prison terms; expansion of opportunities for release from prison, including for some of Louisiana’s longest-serving inmates; restrictions on criminal justice fines and fees, and debt forgiveness for those who make consistent payments; and improvements related to victim notification and input.

Louisiana has the highest imprisonment rate in the U.S., but that may change as a result of comprehensive criminal justice reform passed this summer.