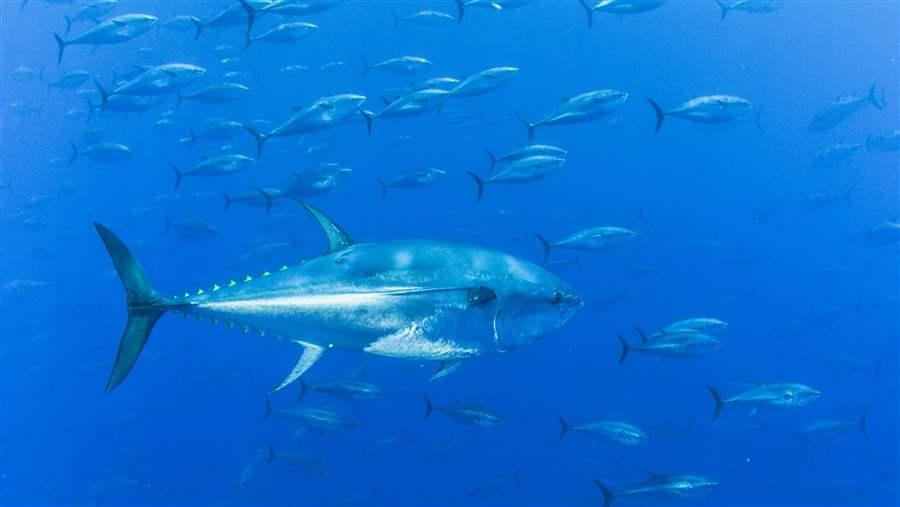 Atlantic bluefin tuna is worth hundreds of millions of dollars per year to ICCAT member states.

During Earth Day marches in more than 600 cities around the world in April, millions of people demanded that science be used to guide policymaking in order to build a sustainable future. This includes following facts in fisheries management, which over the years has often placed short-term political or economic gain over the long-term health of valuable species and the fisheries that depend on them.

For instance, the International Commission for the Conservation of Atlantic Tunas (ICCAT)— which is responsible for the management of about 30 fish stocks, including tunas worth approximately $4.5 billion each year—has at times ignored the advice of its scientists to avoid making politically unpopular decisions. That approach resulted in overfishing of several valuable stocks, including the iconic eastern bluefin tuna.

The good news is that after a critical independent performance review in 2008, ICCAT began to more closely follow scientists’ advice—a trend that helped to support the recovery of North Atlantic swordfish and the dramatic growth of the bluefin population in the eastern Atlantic and Mediterranean Sea. But, although science-based management has clearly worked, the Commission has shown in the past couple of years that it may be returning to its old ways.

This month, ICCAT managers and scientists will gather in Madrid for a series of meetings that could finally codify the role of science in ICCAT’s decision-making and help the Commission develop a precautionary approach to the long-term management of its fisheries.

On June 27-28, a working group will discuss a plan of action in response to ICCAT’s second independent performance review, conducted in 2016. A follow-up to the scathing 2008 review, last year’s update showed that ICCAT has made real progress in some areas but urgently needs to take further action.

This chart demonstrates that when ICCAT follows the scientific advice (years shaded in white), stocks can rebound.

Although eastern bluefin was finally showing signs of recovery in response to ICCAT’s science-based management, the review found that the Commission has not applied the same rigor to managing other stocks, such as bigeye tuna and Mediterranean swordfish, which are suffering as a result. For example, even though Mediterranean swordfish is at just 12 percent of its target abundance, ICCAT delayed taking steps to protect the stock for 14 years. When it finally took action in November 2016, just after the independent review highlighted concern over the “unsatisfactory status of the stock,” the Commission still set a catch limit more than 50 percent above the scientifically advised level.

At the same time, even after the review praised ICCAT for its improved management of eastern bluefin tuna, the Commission once again agreed to set quotas for this stock above the scientifically advised level. This was not the only sign of backsliding. In 2015 and 2016, ICCAT managers followed the scientific advice only 43 percent of the time, a steep drop in precautionary management from the 88 percent of 2009-14.

This first meeting of ICCAT’s Performance Review working group is an important opportunity for the parties to recommit to proactive, science-based management and to show they are serious about rebuilding overfished stocks and maintaining those that are healthy.

On June 29-30, ICCAT managers and scientists will come together to forge a way forward on harvest strategies for priority fish stocks, including Atlantic bluefin and tropical tunas. Under harvest strategies, managers pre-agree on the management response to shifts in stock status instead of negotiating those adjustments behind closed doors after a stock assessment is released. One of the benefits of this approach is that it avoids the current “yo-yo” management problem, whereby managers drastically reduce quotas in the face of collapse and then rapidly increase them in response to signs of growth. Because harvest strategies requires managers to set the management objectives, rules, and responses upfront, the method increases the efficiency, transparency, and predictability of decision-making—a win for managers, the fish, and the fishing industry.

Laudably, ICCAT has already agreed to adopt harvest strategies for eight priority stocks by 2020, with northern albacore scheduled for adoption this year, Atlantic bluefin in 2018, North Atlantic swordfish in 2019, and tropical tunas in 2020. To keep ICCAT on track with its deadlines, managers and scientists at the upcoming meeting must recommend a harvest strategy for albacore and propose draft management objectives for Atlantic bluefin for adoption by the full Commission in November.

November meeting offers ICCAT a chance to prove its commitment

The June meetings are important primers for ICCAT’s annual meeting Nov. 13-21 in Marrakesh, Morocco, where the Commission will set catch quotas and continue its progress on implementing harvest strategies for Atlantic bluefin and other key stocks. Hopefully, managers and scientists will use the June sessions to learn from the past. By embracing science-based management and a transition to harvest strategies, ICCAT can solidify its stature as a leading regional fisheries management organization—and signal to all who support fact-based policy that it will rely on science to ensure the long-term sustainability of its fisheries.

The Science Is Critical for Atlantic Stocks

The International Commission for the Conservation of Atlantic Tunas (ICCAT) is a regional fisheries management organization that plays an important role in safeguarding the health of iconic Atlantic fish populations and the profitability of the fisheries that depend on them.