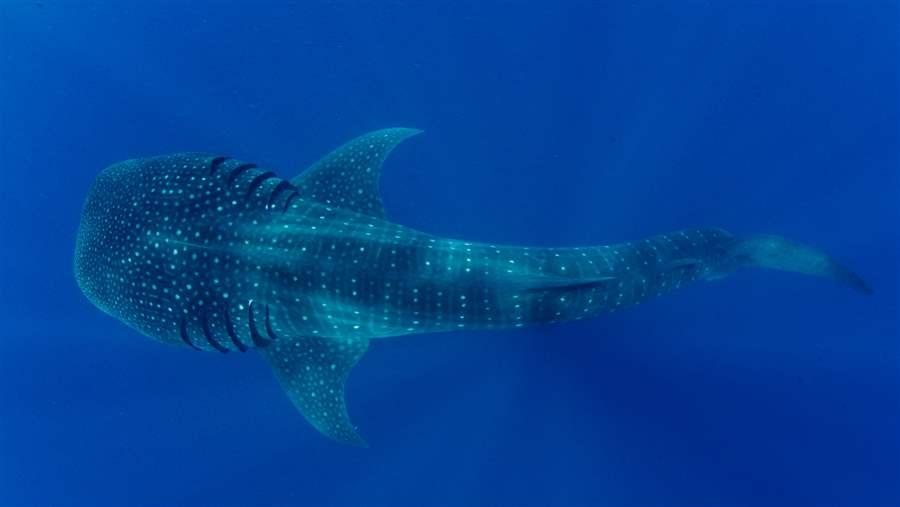 Whale sharks, the largest fish in the ocean, face population declines and need further protections, which they could receive when the Convention on the Conservation of Migratory Species of Wild Animals meets this October in Manila, Philippines.

Because many shark species are highly migratory, even those that spend part of their lives in protected waters might swim far from those areas, leaving them vulnerable to fishing nets and hooks. That’s partially why 63 million to 273 million sharks are killed every year in the world’s fisheries.

But there is hope for lowering that unsustainable mortality rate. The Convention on the Conservation of Migratory Species of Wild Animals (CMS), a United Nations treaty organization, is uniquely able to set measures to protect the world’s migratory animals. In recent years, this has included an ever-increasing investment in shark conservation. That trend continues this year ahead of the body’s 12th conference of the parties (CoP) in Manila, Philippines, in October: CMS member governments have submitted six proposals to protect some of the world’s most threatened sharks.

The Philippines, Israel and Sri Lanka have proposed prohibiting any take of whale sharks, wherever they migrate, a restriction known as a CMS Appendix I listing.  Monaco has proposed that the angel shark receive a similar level of protection. The following species have been proposed for listing on CMS Appendix II,  which would encourage international action to properly manage and protect these species throughout their migratory range:  The common guitarfish (proposed by Senegal, Mauritania, Togo and  Israel);  the whitespotted wedgefish (the Philippines), dusky sharks (Honduras); and blue sharks (Samoa and Sri Lanka).

The world’s biggest fish—worth more in the water

The host government of the Philippines is already leading the way ahead of the meeting by proposing increased protections for the world’s biggest fish, the whale shark, and by including the iconic species on the CoP’s logo. These sharks are a huge ecotourism draw in the Philippines, worth more to the country alive than dead. But continued population declines globally—whale sharks are killed by ship propellers and fishing, and often when they are taken unintentionally as bycatch—led the International Union for Conservation of Nature (IUCN) to recently assess them as endangered. 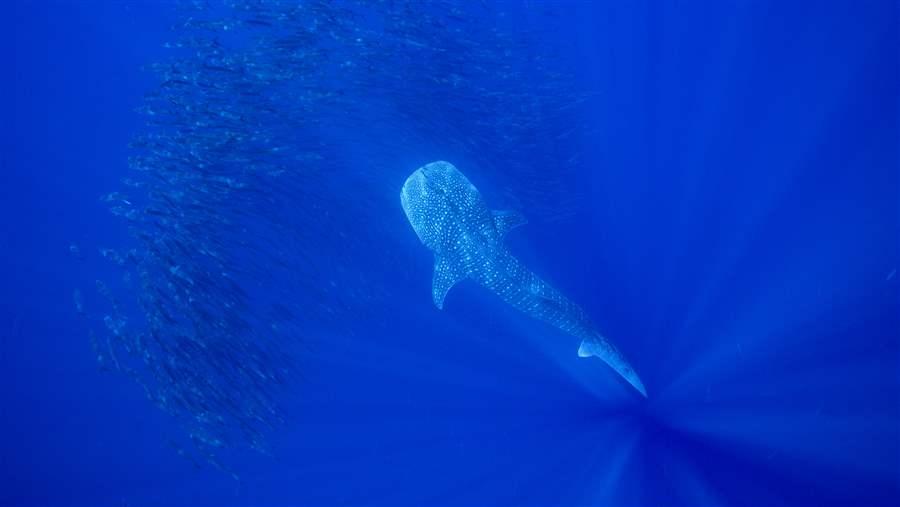 Many divers flock to the Philippines to swim with whale sharks, the gentle giants of the ocean.

The fin trade remains a huge driver of global shark declines. In recent years, several regularly traded species have gained protections through the Convention on International Trade in Endangered Species of Wild Fauna and Flora (CITES), but many have been left unprotected and have few restrictions on their global commerce. But for regularly traded shark species that are also migratory, CMS can help prioritize better management.

Blue sharks are the mainstay of the global shark fin trade and, as the most-traded shark, are fished heavily on the high seas. And yet none of the world’s regional fisheries management organizations has set sustainable catch limits on the species—either as a targeted species or as bycatch. 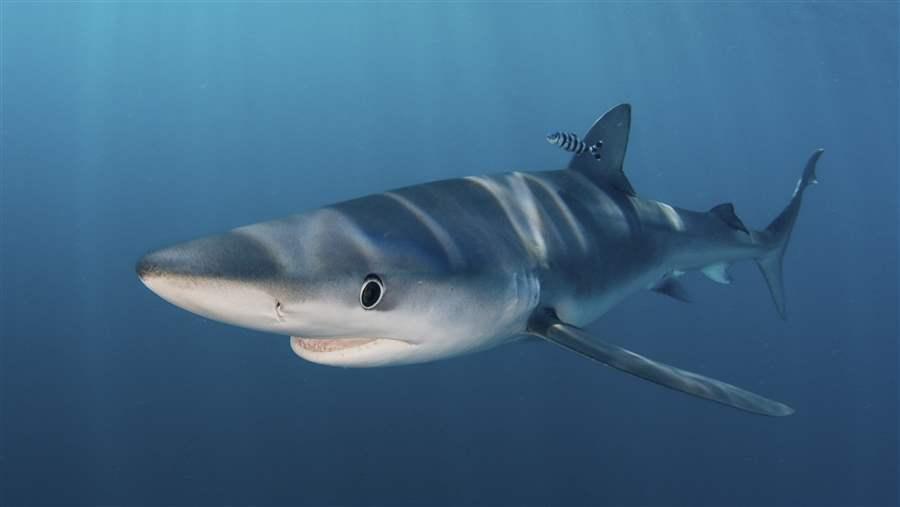 Blue sharks are one of the species that will be considered for protections by CMS member governments at the body’s 12th CoP this October in Manila, Philippines.

Without protections, even this globally abundant migratory shark will face extinction. Fortunately, Sri Lanka has proposed listing the species on CMS Appendix II.

Dusky sharks offer a cautionary tale. They are also regularly traded for their fins but, unlike blue sharks, may already be beyond help, with declines of 80 percent over large parts of their range and recovery times of more than 100 years. Still, in hopes of saving the species from extinction, Honduras has proposed listing it on CMS Appendix II. 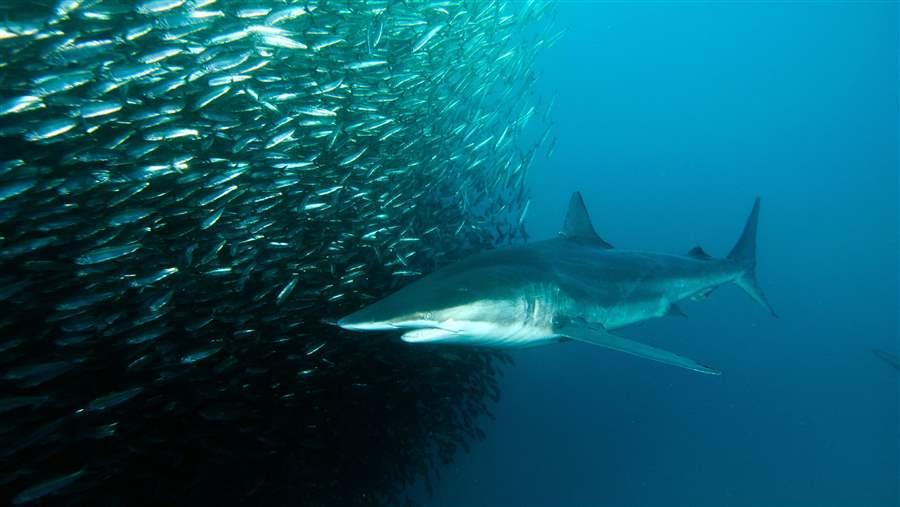 Dusky sharks, heavily fished for their fins, have not shown signs of recovering from huge population declines.

Strange and endangered—angels and guitars

The IUCN also found that angel sharks, guitarfish, and wedgefish, are among the three most vulnerable shark families, with huge population declines across their entire ranges. Senegal, Togo, Mauritania, the Philippines, Israel and Monaco proposed affording stronger protections to the common guitarfish, whitespotted wedgefish, and the angel shark at the CMS CoP.

In many places, species within the three families have been completely wiped out, through both targeted fishing and bycatch. Guitarfish fins, along with those from their close relatives the wedgefish, are also among the most highly valued in the global shark fin trade, and these unique families are virtually unmanaged globally. 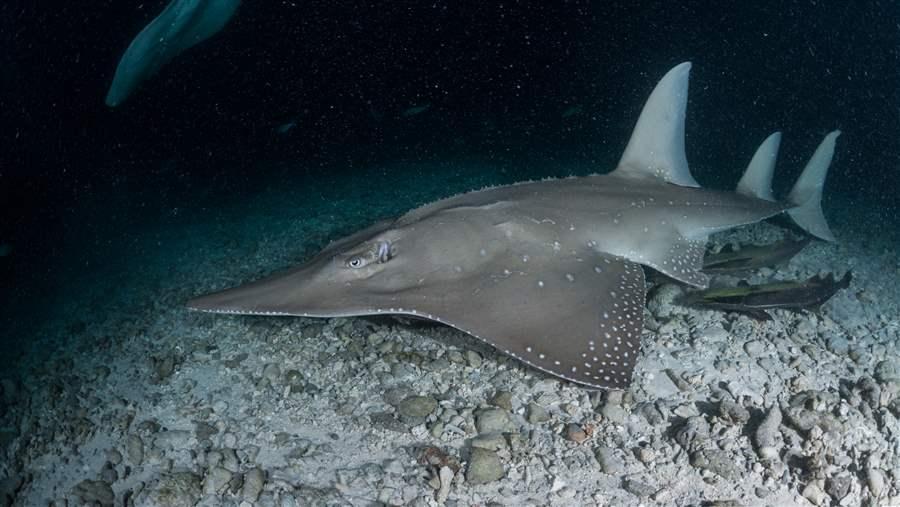 Populations of guitarfish and wedgefish, pictured above, have been decimated around the world.

Looking ahead to Manila

When the 124 CMS members convene Oct. 23 in Manila, they should adopt these additional listings on CMS Appendix I and II for sharks and rays, which urgently need better management globally. In doing so, CMS would carry on momentum from its own successful efforts, and those of fisheries management bodies and CITES, to protect the world’s sharks and make the entire ocean safer for those that migrate.

JOHANNESBURG, South Africa&mdash;The Pew Charitable Trusts today applauded the move by the Convention on International Trade in Endangered Species of Wild Fauna and Flora (CITES) to extend to four species of sharks and nine species of mobula rays the protections they need to recover from depleted populations.