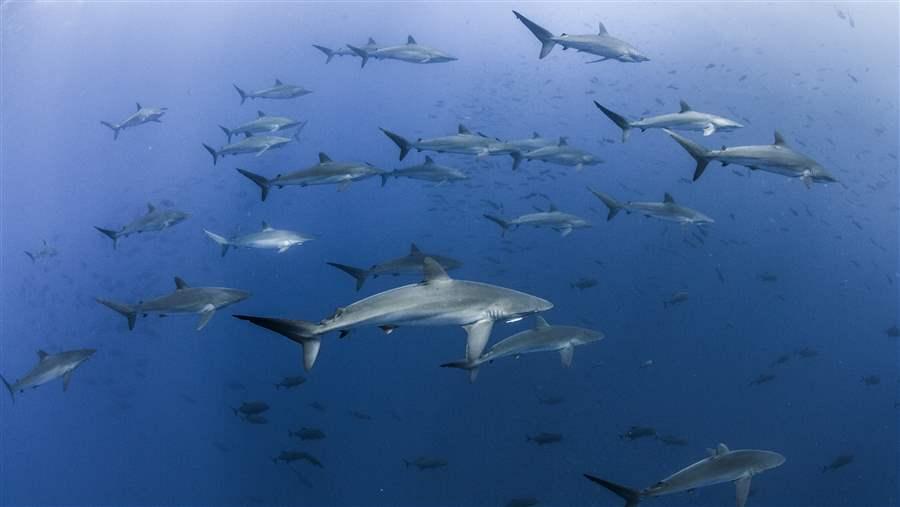 This vote is a huge step toward ensuring the survival of these larger shark and ray species, which continue to be at greatest risk of extinction because of the value of their fins and gills.

JOHANNESBURG, South Africa—The Pew Charitable Trusts today applauded the move by the Convention on International Trade in Endangered Species of Wild Fauna and Flora (CITES) to extend to four species of sharks and nine species of mobula rays the protections they need to recover from depleted populations.

Trade in silky sharks, three species of thresher sharks, and nine species of mobula rays now will have to be proven sustainable, after two-thirds of the 182 CITES member governments at the 17th Conference of the Parties (CoP17) in Johannesburg, South Africa, agreed to add the species to Appendix II.

These additional listings double the percentage of sharks threatened by the fin trade that are now regulated under the world’s premier wildlife conservation convention. The move provides a chance for these species to recover from population declines of more than 70 percent throughout their range caused primarily by global trade in fins and gill plates.

“This vote is a huge step toward ensuring the survival of these larger shark and ray species, which continue to be at greatest risk of extinction because of the value of their fins and gills,” said Luke Warwick, director of The Pew Charitable Trusts’ global shark conservation campaign. “The call from a record-setting number of governments to protect these species has been answered.

“We look forward to continued global success and coordination as the listings are implemented,” added Warwick, “and applaud CITES as the world’s leading protector of sharks and rays.”

The proposals to add these shark and ray species to Appendix II drew historic levels of support this year, with more than 50 countries signing on as co-sponsors for one or more of the proposed listings. In the lead-up to CoP17, regional workshops were held around the world, including in the Dominican Republic, Samoa, Senegal, Sri Lanka, and South Africa, which helped build massive backing for the new listings.

Implementation of the landmark 2013 shark and ray Appendix II listings, which for the first time allowed for regulation of five commercially traded shark species, has been heralded as widely successful. Governments around the world have hosted training workshops for customs and environment officials since the 2013 listings went into effect on best practices to create sustainable export limits and customs checks to prevent illegal trade.

“Governments have the blueprint to duplicate and even surpass the implementation successes of the 2013 shark and ray listings,” said Warwick. “We expect an enormous global response to engage and effectively enforce these latest protections, and look forward to the continued growth of a worldwide push toward shark and ray conservation.”