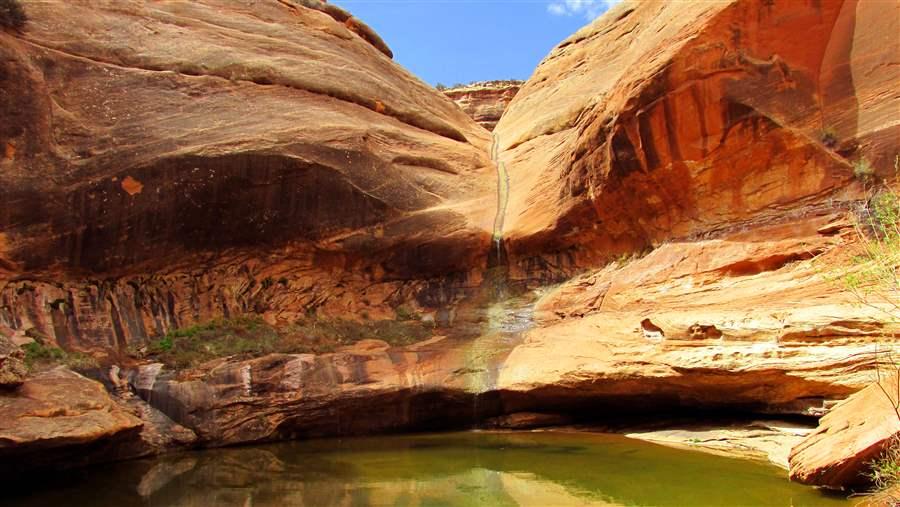 The Owl Creek pour-off and pool in Owl Canyon is among the many features drawing visitors to Bears Ears National Monument in Utah.

Last year, another president and his interior secretary took a big step toward completing Ickes’ dream.  At the request of five Native American tribes living in the vicinity, and after nearly a weeklong tour by former Interior Secretary Sally Jewell of places proposed for protection, Barack Obama signed a proclamation under authority of the Antiquities Act to designate 1.3 million acres of land as the Bears Ears National Monument. 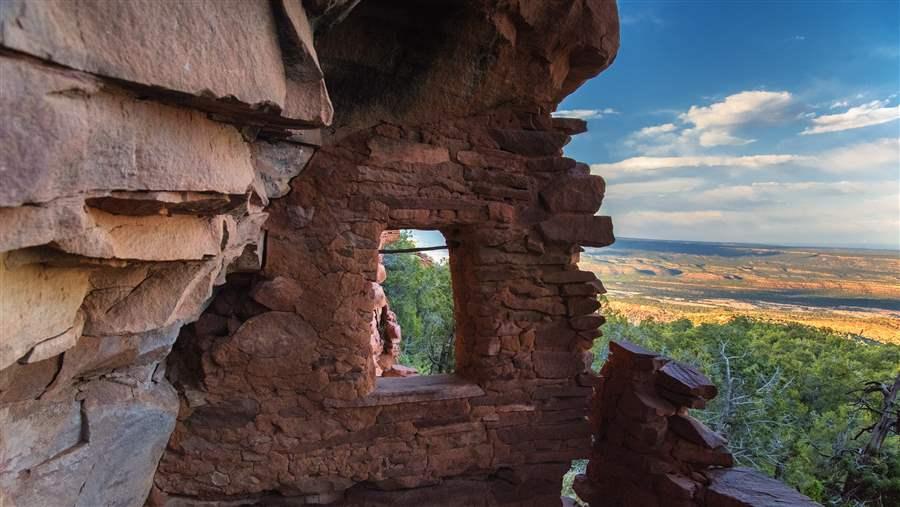 “We worked very closely with our scientists, people on the ground, people in the communities that know these landscapes well, the tribes, particularly in [the] case of Bears Ears, that understood what’s needed for hunting, gathering, and traditional practices and sacred sites,” Jewell recently told The Salt Lake Tribune.  “Those shaped the boundaries of these monuments which were very carefully thought out.”

On April 26, President Donald Trump took action that could begin to unravel the achievement of this decadeslong vision.  He signed an order directing Interior Secretary Ryan Zinke to review all national monuments established in the past 21 years—upward of two dozen sites in states primarily across the West, including Bears Ears and Grand Staircase-Escalante—to assess whether the “reservation” of these public lands is “the smallest area compatible with proper care and management of the objects to be protected” and whether the “designated lands” are really “historic landmarks, historic and prehistoric structures.” 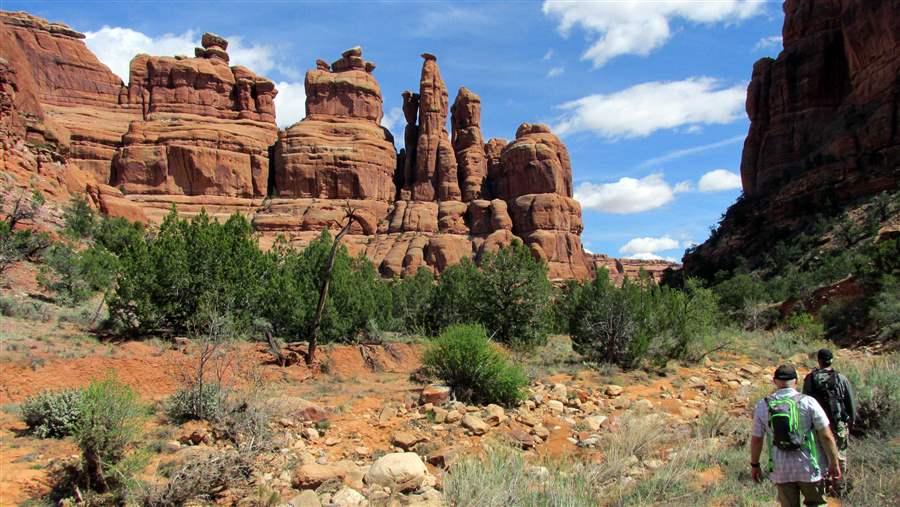 In late March, I visited Bears Ears with friends.  We camped at the head of Mule Canyon, spent time at a rim overlooking Arch Canyon, and hiked into Owl Canyon and up Indian Creek. Our conclusion: This is a spectacular place.  Secretary Ickes in 1936 and the coalition of tribes last year were absolutely right in pushing for its protection, and all Americans are fortunate to have this natural heritage preserved for them and their children and grandchildren.

Throughout the monument, we saw prehistoric structures and historic landmarks, from the intricately built stone watchtowers that guarded a water spring at the head of the canyon to Newspaper Rock, a sandstone slab filled with centuries’ worth of pictographs. 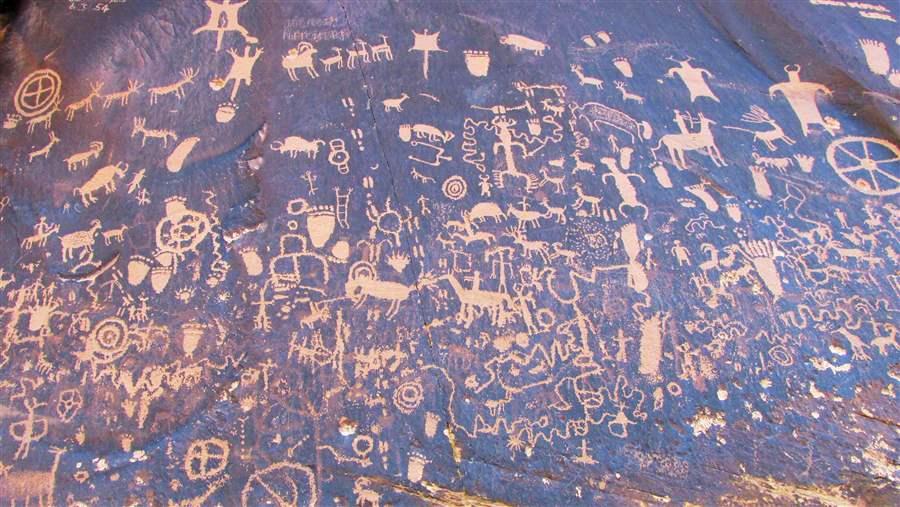 These 2,000-year-old petroglyphs on Newspaper Rock near Monticello, Utah, are within the Bears Ears National Monument boundary.

We heard coyotes yipping at dawn, just as the sky was beginning to light the red rock afire.  High up a sandstone fin we spied ancient cliff dwellings carved into the nearly vertical rock face. In the deep blue of a cloudless day, an arch spanning two precipitous ridges cast a stripe of shade on the canyon bottom where we hiked.  We saw elk traversing a mesa through sagebrush flats and deer browsing in juniper-pinyon forests.

Each of these moments is etched upon our memories, and we count ourselves lucky to have found Bears Ears as it has always been.

It is now up to all citizens to speak up for our national monuments.  Submit your comment by May 26 to urge President Trump and Secretary Zinke to preserve Bears Ears as it was approved.  My friends and I have.  Having experienced this special place ourselves, we are now personally invested in its intact protection so that our children and grandchildren can explore and enjoy it as we have. 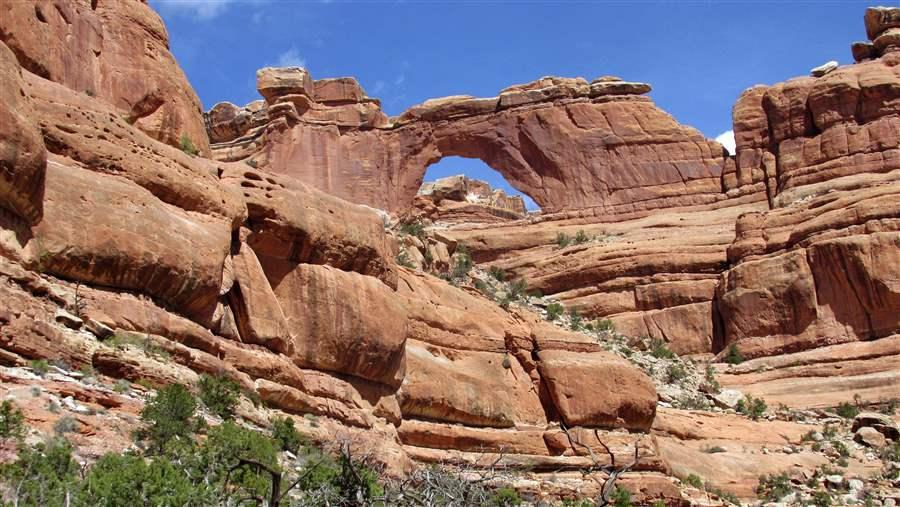 Nevills Arch in Owl Canyon off Cedar Mesa in the monument.