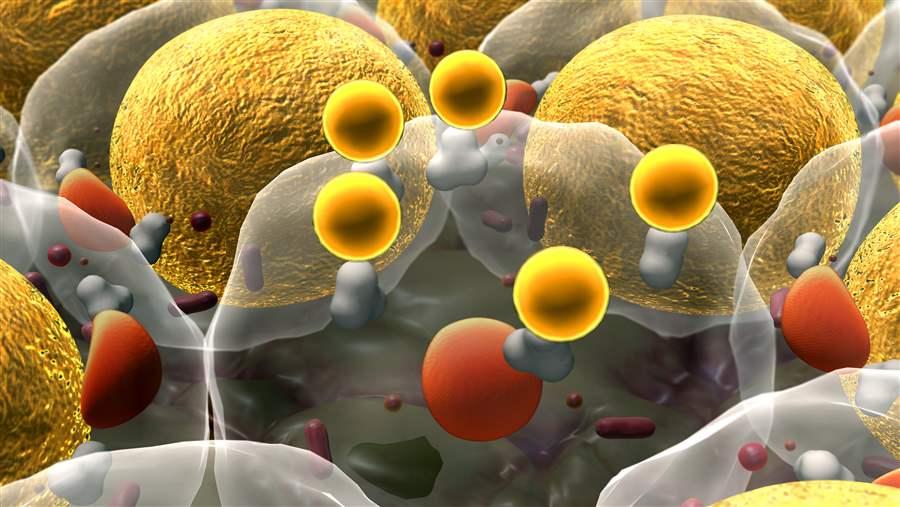 Too much cholesterol can be harmful and lead to heart disease, but a certain amount is needed for the body to function properly. It acts as a building block for cell membranes and as a starting material for steroid hormones and vitamin D. To maintain the right balance, cells have evolved a system to measure cholesterol levels and adjust the rate at which the body produces it, as well as how much is absorbed from the foods we eat. And according to a new study, that system may also have far-reaching control over processes such as cell size, and if and when cells divide, a finding that can improve our understanding of certain diseases.

Roberto Zoncu, a member of the inaugural class of Pew-Stewart scholars, studies lysosomes—cellular structures that specialize in storing, releasing, and processing cholesterol and other nutrients such as sugar and amino acids. In the March issue of Science, Zoncu and his colleagues describe their discovery of a process by which lysosomal proteins relay the availability of cholesterol via a nutrient sensor called mTOR to control cell growth. This discovery provides insight into how cells regulate growth based on their ability to sense the nutrients we consume, and how abnormalities in cholesterol sensing might increase the prevalence of illnesses like metabolic diseases and cancer, which are characterized by inappropriate cell growth.

This finding brings Zoncu a step closer to his career goal: developing new ways to combat cancer. As he described in an interview with Pew in 2014, he is interested in learning how cancer cells manipulate normal cellular processes to give themselves a survival advantage and in exploring ways to starve cancer cells of nutrients.

For Pew-Stewart Scholar for Cancer Research Roberto Zoncu, science has always been an adventure.

Latest from the Biomedical Research Program