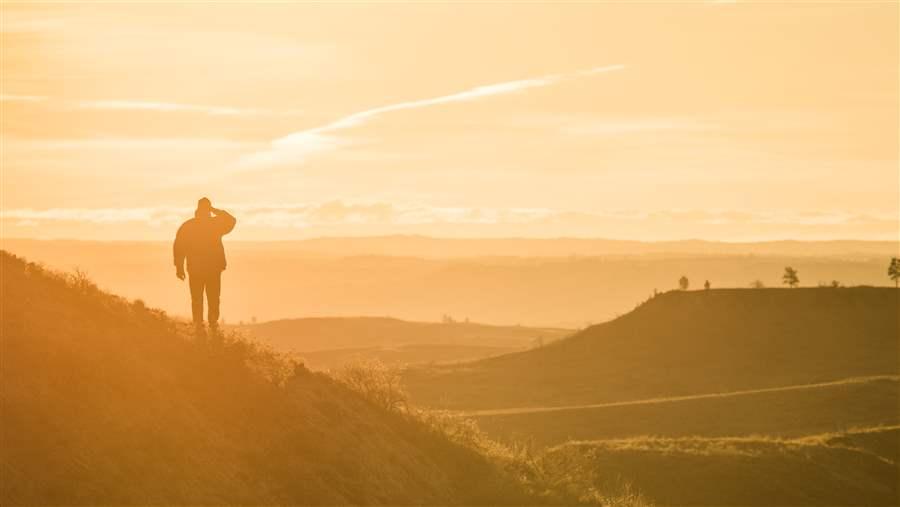 A visitor enjoys solitude and an expansive view of BLM lands near the Musselshell River.

Editor's Note: This article was updated on April 10, 2017 to show a correct photo of BLM lands near the Musselshell River. The previous photo was of land near Lena Creek, Montana.

Charles Russell, the world-renowned 19th-century artist who documented the wild frontier of the American West, used his drawings and paintings to warn that those landscapes were at risk of vanishing. But because of conservation and planning, the prairies and rich natural habitat of central Montana’s Russell Country—named for its famous resident—continue to thrive.

Today, Montana artist, outdoor photographer, and conservationist Tony Bynum is carrying on the tradition of capturing the state’s stirring beauty in hopes of inspiring people to protect it. His work is timely: Soon the Lewistown, Montana, office of the Bureau of Land Management (BLM) will revise its resource management plan for the region, which will shape habitat management and public access for the next 20 years or more.

Below are six of Bynum’s photographs, along with six reasons why the BLM should protect Montana’s rugged outdoor spaces.

1. The vast public lands in central Montana, which are under BLM stewardship, include large swaths of pristine prairie that sweep westward into rough and craggy breaks close to the Missouri River. 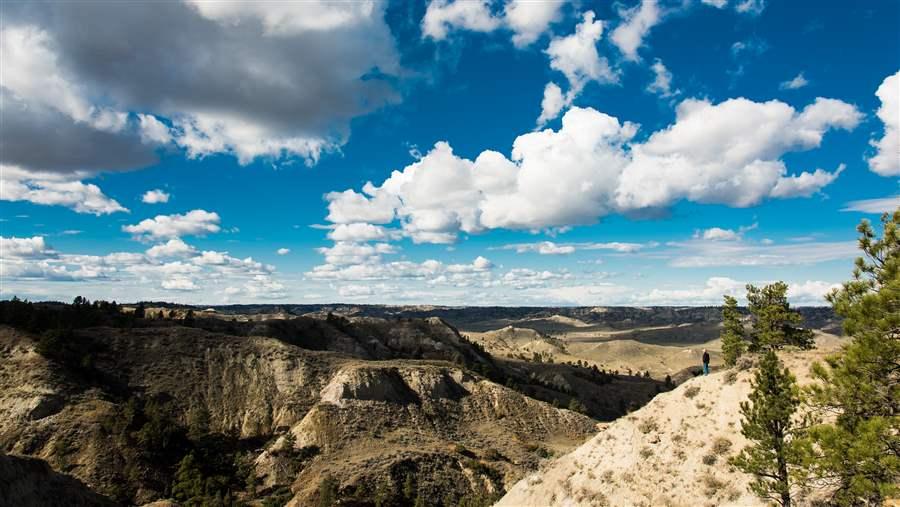 A Russell Country landscape shows the unspoiled expanse that BLM can safeguard with its next resource management plan.

2. Lewis and Clark described this region’s harsh landscape as “the Deserts of America,” and fur traders commonly referred to this part of the Missouri River watershed as the badlands. One of the last places in the West to be settled, this sparsely populated area remains almost as remote and wild as it was some 200 years ago. 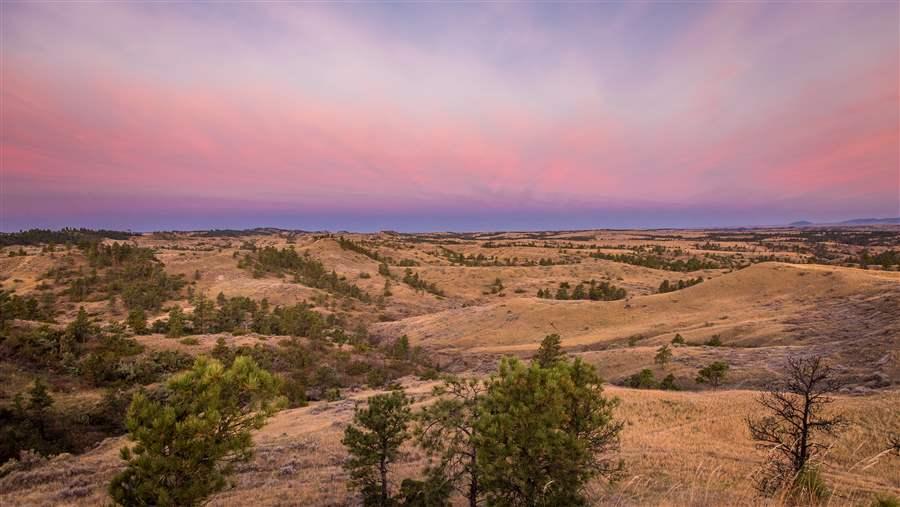 Looking north and west onto Horse Camp Trail. The Little Rocky Mountains are off in the distance.

3. Continuing to protect this iconic part of the American West makes strong economic sense: Because of its untamed nature, land managed by the BLM’s Lewistown Field Office includes some of the best hunting grounds in North America. It is home to some of the country’s most populous deer and bighorn sheep habitat and also features the state’s second-largest elk herd and its trophy bulls, some of the West’s biggest. Four hunting districts that comprise the majority of public lands managed by the Lewistown office account for nearly $4 million in hunter-related expenditures annually. 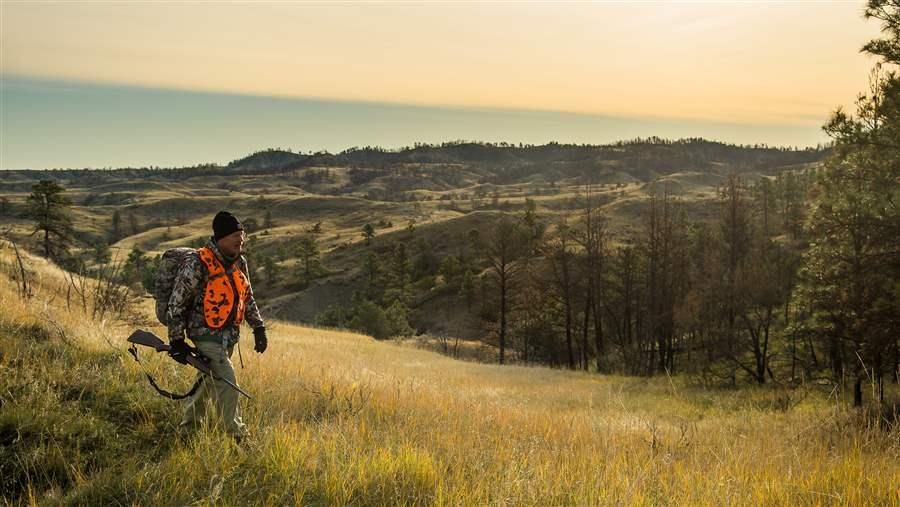 A hunter walks along a ridgetop in the Crooked Creek region of the Musselshell River.

4. In 2014, nonmotorized outdoor activities accounted for 2.9 million visits to Montana’s 8 million acres of BLM lands. These activities, including hunting, fishing, and camping, accounted for more than $164 million in spending in the state economy. 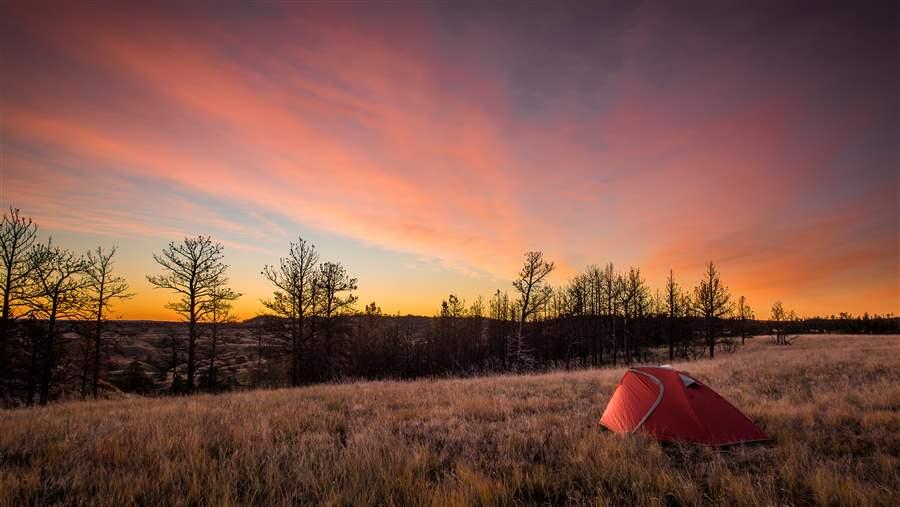 A camper’s tent sits in the glow of a painted sky near Crooked Creek a tributary of the Missouri River.

5. The BLM units of Chain Buttes, Spear Coulee, Dovetail, and Fort Musselshell are wild and remote and deserve management that will keep them that way: accessible to hunters, hikers, backpackers, and others to enjoy in low-impact ways. 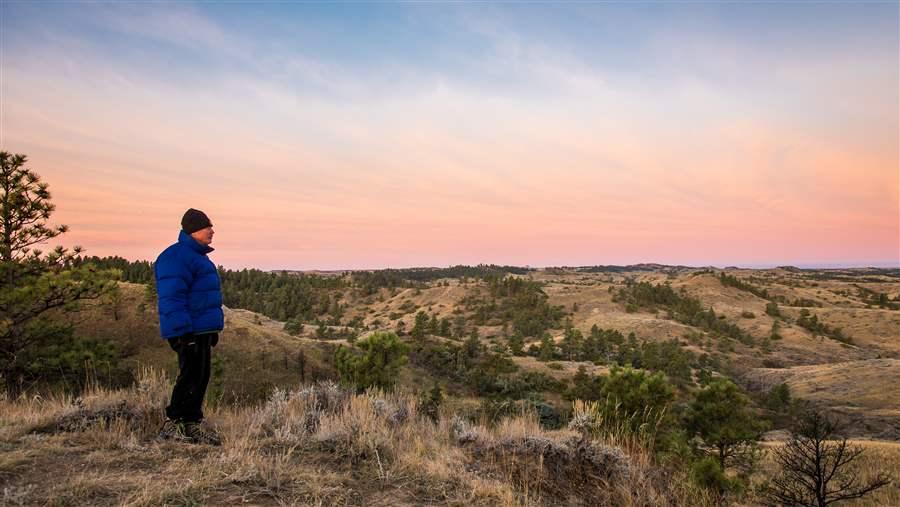 A hiker looks on the steep, partially burned sagebrush and ponderosa pine near Crooked Creek.

6. The Pew Charitable Trusts, along with local and national partners, is engaging in the Lewistown resource management planning process. We work with stakeholders to ensure that the draft plans present a balance of conservation, development, and recreation.