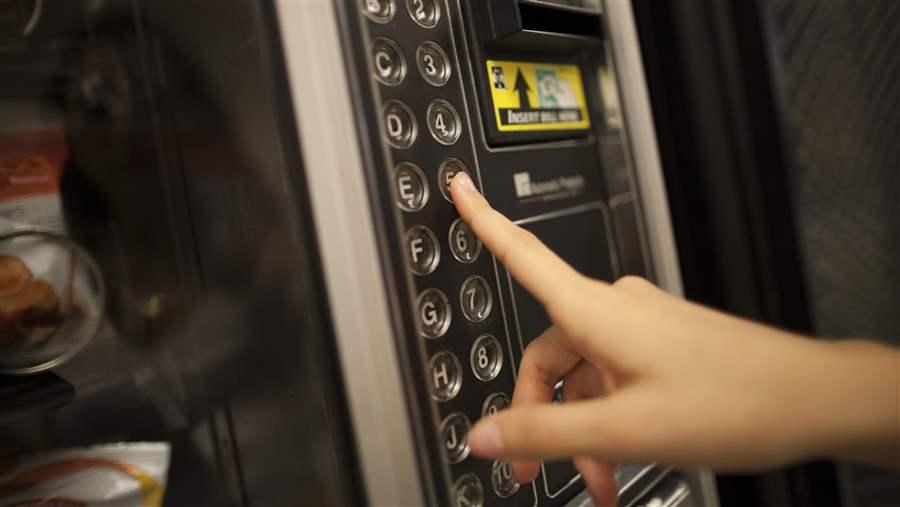 Each day, 4 in 10 students nationwide buy and eat at least one snack at school. Rhode Island has set nutrition standards for food and drinks sold in school vending machines, cafeteria a la carte lines, and elsewhere on campus that exceed federal guidelines.

Rhode Island’s General Assembly passed a law in 2016 to strengthen nutrition standards for snacks and drinks sold in schools. The bill was backed by a broad coalition of education, health, and children’s organizations. The Kids’ Safe and Healthful Foods Project asked two of the leaders—Karin Wetherill, wellness coordinator of the Rhode Island Healthy Schools Coalition, and Megan Tucker, government relations director for the American Heart Association in Rhode Island—how advocates built support for the policy changes among lawmakers, educators, and other groups.

Q: Rhode Island has had nutritional standards for school snacks since the mid-2000s. What led you to raise the issue with legislators again?

Wetherill: Rhode Island has been a leader in this area, and we needed to update our law to ensure that it aligned with the U.S. Department of Agriculture’s final Smart Snacks in School nutrition rule, which came out in 2016, and also to give schools clear, streamlined guidance. One important goal was to preserve state provisions that exceeded national standards, such as our broader prohibition on drinks with caffeine and artificial sweeteners in all schools, and then to strengthen Rhode Island law with USDA’s healthier limits on sodium.

Tucker: USDA’s rule gave states some flexibility on whether to allow exemptions for sales of less-healthy foods to students for fundraising purposes, but we successfully made the case against junk-food fundraising loopholes during the school day in Rhode Island.

Q: What helped make your coalition so effective in this campaign?

Wetherill: The size and diversity of our coalition was a big plus. We had school nutrition directors, district school board members, pediatricians, the medical and cancer societies, influential research organizations like Rhode Island Kids Count, and even Blue Cross Blue Shield, a major insurer and business in the state. Also really important were our solid working relationships with leaders in the state Departments of Education and Health. Much of that grew from the outreach and implementation support our members have provided ever since the first state laws and regulations on this issue were passed. We’ve been collaborating with department staff for years to educate school administrators, parents, and students on nutrition issues, and that’s established great lines of communication between advocates and policymakers.

Tucker: Another key was the involvement of the NAACP, Progreso Latino, and other organizations representing communities that experience higher rates of childhood obesity and greater health disparities than the rest of our state. Many of these groups have wonderful youth leadership programs that helped connect students directly affected by these policies with our campaign. The hearing rooms in the Statehouse go silent whenever a kid gets up there to testify. Legislators listen. They’re invested. We can’t stress enough the importance of engaging students in school wellness campaigns.

The hearing rooms in the Statehouse go silent whenever a kid gets up there to testify. Legislators listen. They’re invested.

Q: Did engaging a broad range of groups require any new or special tactics?

Wetherill: Going out regularly and talking with your partners—or potential ones—in their communities is essential. After we had that first success with the 2007 law, we didn’t just rest on our laurels. We worked hard to provide guidance to schools, especially on fundraising, and to share examples of alternatives to junk food to show them that they could still raise money for important programs and services, but in healthy ways.

I attend districts’ wellness committee meetings across the state, and that face-to-face contact is so valuable. I always say I’m there as a resource to listen and help, but I’m also there to hear their success stories so we can share those examples with other schools.

Tucker: One-on-one meetings were critical to learning about why these issues are important to each group. These conversations made it much easier to plug them into our coalition work where it made sense and in ways that fit their organization. It also allowed us to ask them, “Who else should we be reaching out to? Can you open that door for us?” That’s how we brought on board some amazing community-based groups who work with families experiencing the ill effects of junk food in their neighborhoods.

We also moved coalition meetings from our office across from the Statehouse to a community health center on the south side of Providence. That location made it more comfortable and convenient for many of these new members to participate.

Q: What else do you do—or will you do—to keep the momentum you’ve built?

Wetherill: For one, we’re going to keep making friends and allies by paying attention to implementation. The Healthy Schools Coalition hosts an annual breakfast that is well-attended by school board members, administrators, teachers, and other community wellness leaders throughout the state. It’s a perfect venue to share best practices for implementing the new laws in local schools and to advocate for new policy opportunities coming down the pike.

Tucker: We’ll keep investing in those relationships with our champions in the General Assembly, too. Some of the lawmakers who carried the first snack nutrition bills in 2006 rose through the ranks and earned leadership positions that helped secure the 2016 legislation. We want them to understand we’re in it for the long haul and to continue seizing every chance to make Rhode Island’s schools healthy places for all children.

The U.S. Department of Agriculture released two final rules July 21 that mean schools must continue to meet strong nutrition guidelines for snacks sold to kids and also will prevent marketing of foods and drinks inconsistent with those standards.

School Fundraisers: A Back Door for Junk Food?

School fundraising has opened a back door that lets high-calorie food and drinks into schools on a regular basis. One state even passed a policy allowing four unhealthy fundraisers every school day.