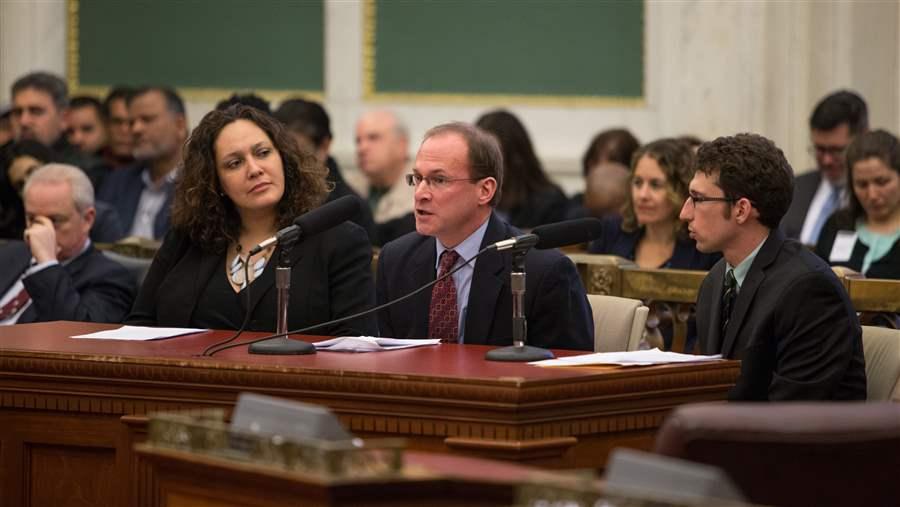 Pew's Tom Ginsberg (center) and Josh Goodman (right) talk about their research on tax incentives in front of a Philadelphia City Council committee on March 10, 2017.

Philadelphia City Council has unanimously approved a bill requiring the city to regularly evaluate the economic impact of tax incentive and exemption programs.

Council interest in these evaluations relates to a Pew report published in August 2016, “Philadelphia Business Taxes: Incentives and Exemptions,” said the legislation’s sponsor, council member Allan Domb. Pew’s analysis found that Philadelphia has 21 tax incentives and exemptions, more than any other city studied, and that those programs resulted in an average of at least $215 million in forgone city tax revenue in the most recent years for which records were available. Pew’s research also found that Philadelphia, like many other cities, does not evaluate tax incentives and exemptions regularly or rigorously, leaving council members without critical information about whether the benefits of the tax breaks outweigh the costs.

Pew’s researchers were invited to talk about the report findings and provided examples of evaluation policies and processes in other locales during a committee hearing on the topic.

“Only in a few newer cases are Philadelphia officials required by law to check whether the expenditures produce their desired or promised results,” said Thomas Ginsberg of Pew’s Philadelphia research initiative.  “No official local evaluation is required for the biggest and oldest expenditures: the commercial property tax abatement and the Keystone Opportunity Zone.”

About 30 states­—as well as New York City and Washington—have processes in place to regularly assess tax incentives, according to Pew’s Josh Goodman, who researches tax incentive evaluation policies across the nation.

“Our research shows that regular, rigorous evaluation is a proven way to ensure that tax incentive programs are serving the needs of your budget, economy, and taxpayers,” Goodman told the committee. “Evaluations have provided reliable information on the economic impact of incentives, including the extent to which they’re successfully influencing business behavior. These studies have also uncovered flaws in the design or administration of incentives and have recommended improvements.”

The bill authorizes Philadelphia’s commerce director, or another official designated by the mayor, to hire an outside evaluator to study the incentives and publicly report on them. Among other things, the reports would assess the economic effectiveness and other consequences of the tax benefits and recommend which ones “should be maintained, changed, or eliminated.”

The mayor’s office supported the bill, saying the assessments would enhance transparency and accountability.

Philadelphia’s business tax rates are among the highest of any large city in the nation, and the tax structure is frequently cited as a reason for the city’s relatively weak job-creation record over the past several decades. A large and varied number of incentives and exemptions have been created to help make these taxes less onerous on some businesses in some situations. The council bill would provide additional information to policymakers about the effectiveness of the city’s tax strategy.