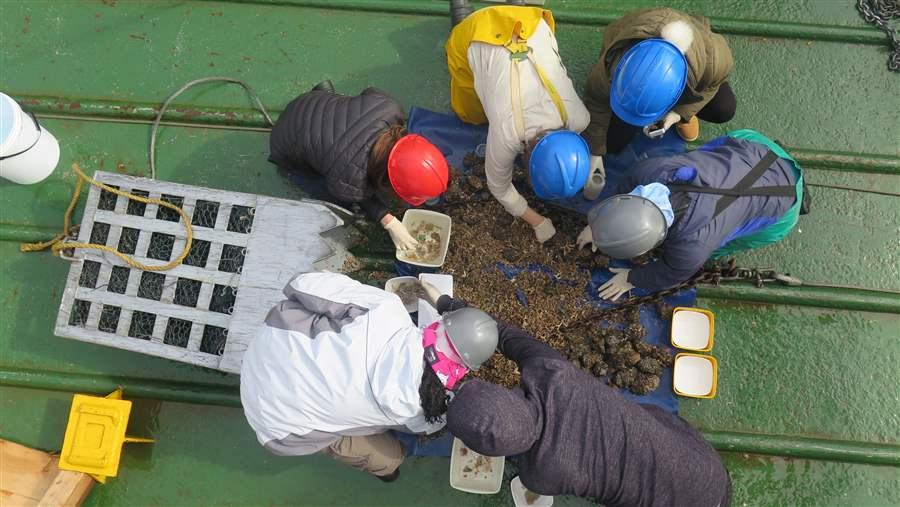 Scientists examine samples collected from the seabed with a camera sled and record data on the fishes, sediment and water.

Improving stewardship of the world’s oceans relies on sound data about marine ecosystems and the diverse life they contain. The quest for such information inspired Kerry Sink, Ph.D., a marine biologist at the South African National Biodiversity Institute, to lead a monthlong expedition in the Atlantic and Indian oceans off South Africa, during which she documented for the first time deep-water coral habitats in the region.

Sink, a Pew marine fellow, and her team are working to develop a better understanding of marine ecosystems in an area where two major ocean currents—the Benguela and the Agulhas—collide off the southern tip of Africa.

The scientists hope this information will help policymakers better manage fishing and other activities in the region, in particular by creating and expanding marine protected areas (MPAs). Sink is one in a burgeoning wave of scientists investigating ecosystem-based management of ocean environments, which means considering the full suite of interactions among species, including humans, when setting policy. Historically, decision-makers set fishing quotas and other rules on a species-by-species basis, without accounting for the effect on the broader environment.

The South African minister of environmental affairs has proposed 22 new MPAs, part of the government’s commitment to protect 5 percent of South Africa’s waters in such areas by 2019. MPAs now cover less than 0.5 percent of the nation’s exclusive economic zone.

Sink, who leads a technical team that advises the government and worked on 21 of the MPA proposals, is using her Pew marine fellowship to help ensure that the areas are managed to promote biological diversity. She is also conducting independent research to define, map, and raise the public’s and government’s awareness of critical areas where MPAs would help conserve the nation’s ocean biodiversity.

During the expedition, which ended in late October, the team used specialized cameras to capture images of life underwater and a variety of equipment to sample and record data on local fishes, sediment, and water. The group found a mix of live corals, sponges, fish, and other marine species, including tiny invertebrates called bryozoans and tunicates, animals that often form colonies.

For Sink, most days on the expedition started with a pre-dawn visit to the bridge to check the vessel’s position and get updates on any work done overnight, which typically included processing specimens, organizing and backing up data from the day, and ensuring that images were accurately labeled. She would then gear up for a shift filled with camera deployments and recovery; downloading of images and footage; and collecting, sorting, and preserving of seabed samples. 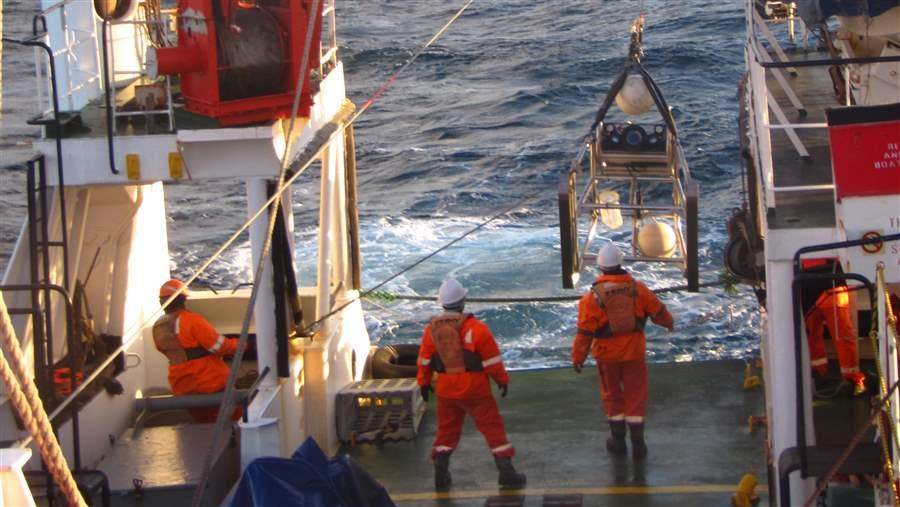 The crew of the research vessel Algoa deploys the tow camera used to obtain the first video of the slope ecosystems of the Agulhas eco-region.

Meals were short affairs, peppered with discussion about the variety of species encountered and what everyone missed most from home. Even amid the frenetic pace of a month on a working vessel, Sink says, she “always tried to take a moment at sunset to sit on deck and watch the albatrosses turn a soft pink in the late afternoon light.”

She and her team made several unexpected discoveries, including a cold-water reef at a depth of about 350 meters with hard, soft, lace, and spiraling black corals, and found that seabed habitats along the southern shelf of the currents are even more diverse and complex than they had expected.

For example, one of the MPA proposals was missing detail on the key feature it was designed to protect, “so we gathered the information needed to fix this,” says Sink. “We also learned that the other six proposed MPAs we visited are well-designed and included healthy coral habitat that needs protection.”

South Africa has a strong conservation heritage. The country’s marine reserves conserve habitats and species found nowhere else on Earth, support the recovery of overexploited fish, and bolster a growing tourism economy.

MPAs, says Sink, can protect “the last refuges of threatened species and … ecosystems” and safeguard nursery and spawning areas that are vital to the future of marine ecosystems, including fisheries. 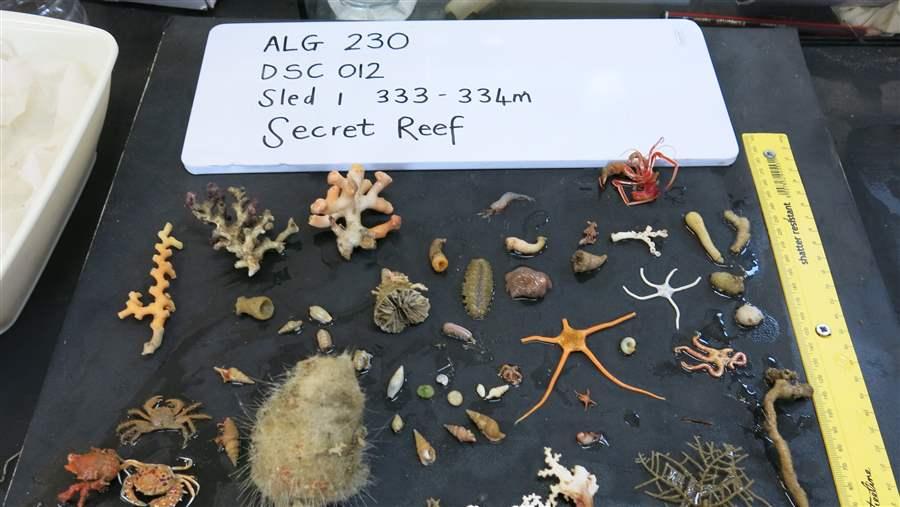 A month of ups and downs

When she’s on her research expeditions, Sink says, she misses going barefoot, normal nights of sleep, and her friends and family at home. But the voyages yield rich rewards. “The best parts for me are the intimate living in the ocean environment, the exploring, the sheer volume of work that a team can do at sea for a month, and the deep relationships you forge” with colleagues on board, she explains. “You get to see places and animals that have never been seen alive before [and] hold some of them in your hands.”

And if her long days at sea yield expanded marine protections and healthier oceans around South Africa, Sink knows her efforts, and those of her team, will prove worthwhile.