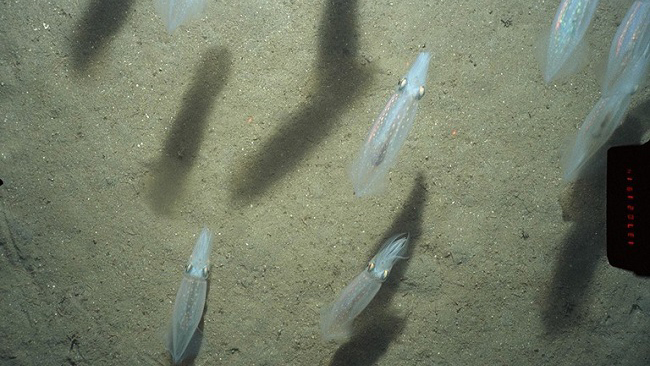 Atlantic longfin squid like these gather every summer to spawn in the waters off Nantucket and Martha’s Vineyard. Tighter commercial fishing management for this forage species is needed for the benefit of squid, ocean predators, and other fishermen.

This post was updated March 7, 2017, with the correct life span of squid; they live less than one year.

Every summer, as crowds amass on New England beaches, another gathering is underway in the waters just offshore. Millions of Atlantic longfin squid return from a winter spent in the deep cold waters off the East Coast to the ecologically rich shallower waters near Nantucket and Martha’s Vineyard. Life is short for these squid—they live less than one year—so they make the most of the crowded summer party. Before long the seafloor is dotted with “squid mops”—thousands of white egg masses that bear a striking resemblance to the floor-cleaning device.

An irresistible bounty for ocean wildlife and fishermen

Squid are a forage species and an important food source for countless ocean predators, so when the longfin gather en masse, other wildlife is never far behind. Along with seabirds, whales, and dolphins, many fish species—including summer flounder, striped bass, black sea bass, and scup—arrive to dine during the bountiful summer-long feast. The area south of Martha’s Vineyard and Nantucket serves as critical feeding and breeding grounds for many of those predators and a wide variety of other species.

This density of longfin in nearshore waters during summer also draws another predator: commercial fishermen. There is growing concern that as the price of longfin squid has increased in recent years the fishing frenzy has also heated up, leading experts to worry that people may be taking too many squid when and where they are spawning. This could have negative impacts on the species, its predators, the larger ecosystem, and the Atlantic fishermen and communities who depend on sustainable fisheries.

A heaping helping of bycatch, seasoned with frustration

Another complication is that it is extremely difficult to catch squid without also netting large amounts of nontarget species, a problem known as bycatch that affects many commercial fisheries. In squid fishing, bycatch is particularly acute: The best estimate is that one pound of bycatch is captured and wasted for every two pounds of squid caught. Summer squid fishermen use weighted mesh nets that drag across the seafloor with openings only 1.75 inches across, leading to the high volume of bycatch. These unintended victims are typically thrown overboard, dead or dying.

When forage fish and their predators are especially concentrated in a nursery, as they are off Nantucket and Martha’s Vineyard in the summer months, the ecological consequences of bycatch can be serious. In fact, the nets also sometimes catch squid mops and, in a high-volume fishery like this one, even catching a small percentage of eggs has an impact. The Mid-Atlantic Fishery Management Council estimates that mops account for 0.3 percent of the total catch, which means that at least 26,000 pounds of unhatched eggs are removed from the ecosystem every season. Even when mops are returned to the ocean, evidence shows that they are less productive than if they hadn’t been disturbed.

The downsides of squid bycatch extend to recreational fishermen on and around Nantucket and Martha’s Vineyard, who are struggling to catch fish. They watch as squid boats just a few miles offshore fill their nets with all manner of sea life, including many species sought by the recreational community.

The squid fleet is also taking millions of squid from the water before they have spawned—longfin that therefore cannot contribute to the next generation. 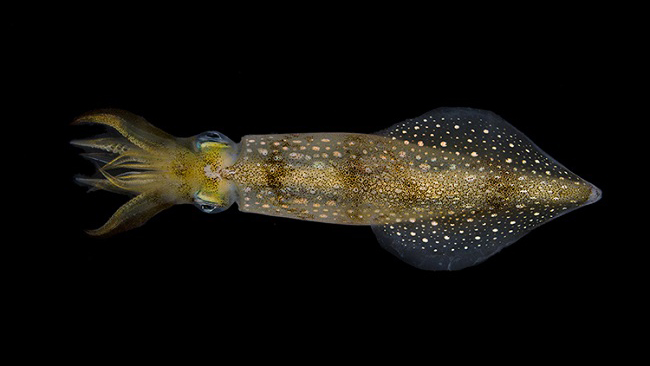 In 2016, fishermen caught over 18 million pounds of squid during the summer spawning months, more than twice the supposed catch limit set for that season. Fishing rules established over a decade ago have left so much wiggle room that fishermen operate with no true catch limit in the summer.

One problem is that the rules allow fishermen to roll over millions of pounds of their squid catch limit from earlier months of the year into the summer months, when squid are spawning. Another issue is that even after fishermen have caught their rollover and summer quotas, they are allowed an “incidental” limit of 2,500 pounds of squid every day—which, given the high value of squid, encourages continued fishing.

Watch this Illex illecebrosus, a close relative of the Atlantic longfin squid, change color as it breathes.

It’s time to give squid a summer break. The best way to do that is the simplest: Completely protect the spawning area south of Nantucket and Martha’s Vineyard from May through August. Creating such a buffer zone would significantly reduce bycatch, along with the capture of squid that haven’t yet spawned and squid mops. Similar closures have been used around the world, including in California, South Africa, and Tasmania, with scientifically documented benefits. Another potential solution would be to go back to the much lower historic quota on longfin for the summer and eliminate the rollovers and large incidental limit after the quota is reached.

The Mid-Atlantic Council is expected to take final action this spring on new management measures for squid, which could take effect as early as next year. Stay tuned for an opportunity to voice your opinion in the coming weeks, and join us in calling for measures that protect forage species, predators, and healthy ocean ecosystems.