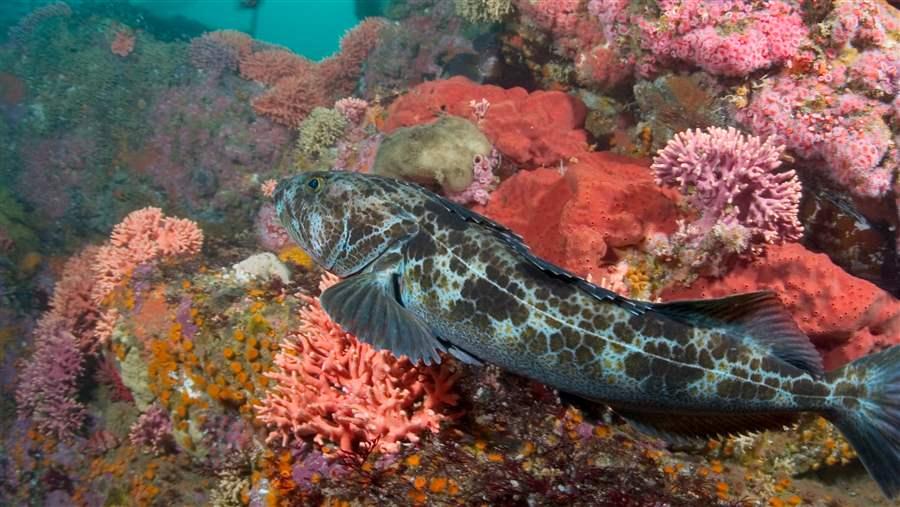 Lingcod, like this one, are often found with cowcod, an overfished species. Fishermen targeting lingcod discovered they could lower their bycatch of cowcod by luring their target species with pots.

If you’ve ever used a fitness tracker, you understand how real-time monitoring and feedback can change what you do. When it comes to bycatch—the incidental catch of nontarget species and a long-standing problem in fisheries—the same concept holds.

The latest report from the National Oceanic and Atmospheric Administration’s Fisheries Service (NOAA Fisheries) on its engineering and technical program to reduce bycatch highlights how the Atlantic longfin squid fleet is using near-real-time reports to avoid catching butterfish. Bycatch of butterfish has been a particular concern to fishermen, especially since 2011 when managers instituted a catch cap to help butterfish rebuild from overfishing.

In 2013, assisted by researchers from Cornell University, fishermen formed a Bycatch Avoidance Communications Network. Captains began filing daily reports of where and how much butterfish they encountered, and in short order analysts at Cornell converted the data into charts indicating where elevated bycatch was—in effect, providing a map of where not to fish.

After two years, the network had helped reduce butterfish bycatch by 55 percent, and fishermen stayed under the bycatch cap. Notably, independent observers on board squid vessels are responsible for measuring and reporting bycatch; their involvement helps increase the accuracy of data about the bycatch problem, which is critical to identifying potential solutions.

Elsewhere in New England, a similar project is still running after five years: More than 250 scallop fishermen record where they are finding yellowtail and windowpane flounder and report those data to scientists at the University of Massachusetts, Dartmouth. The program helps the scallopers reach their quota before hitting the bycatch limit for flounder. The benefits of this program could be further enhanced by placing more independent observers on scallop vessels. 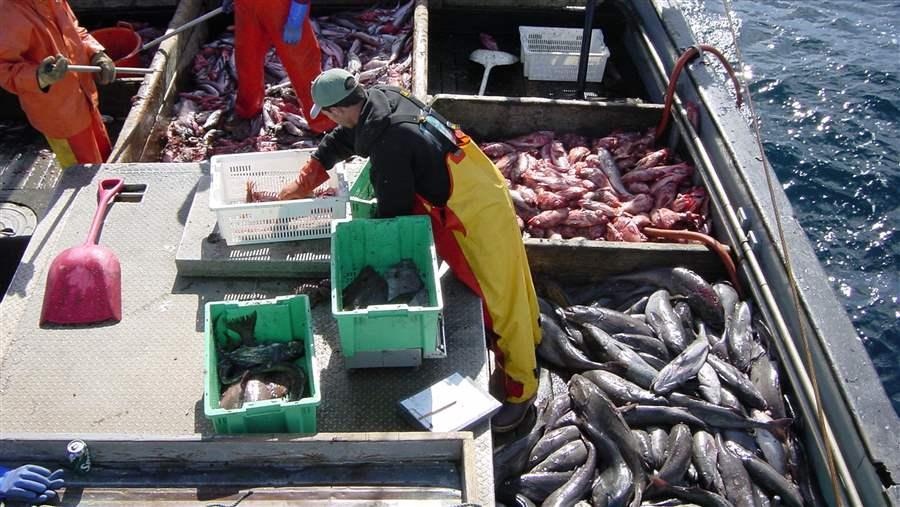 Independent observers measure and report bycatch on fishing vessels. Information from independent observers can be used to set suitable caps on bycatch and help identify solutions to long-standing problem of discarded fish and wildlife in commercial fishing.

A report Pew released with Ocean Conservancy in 2013 detailed efforts in other regions, too. In Alaska, trawlers seeking ocean perch have been sharing data to avoid hot spots for salmon for years. On the U.S. West Coast, Pacific groundfish fleets have developed a system through which groups of fishermen combine their bycatch quotas, with each vessel using a portion according to its typical catch. These risk pools hold a certain amount of the bycatch cap in reserve and serve as information-sharing hubs to help members know what areas to fish and which to avoid.

West Coast fishermen have also developed other innovative methods to reduce bycatch. For example, they fish for petrale sole at night, when overfished canary rockfish—which are often found with the sole—have moved higher up in the water column, and catch lingcod in pots, which the overfished cowcod will not enter. These fishermen also show their commitment to reducing bycatch by supporting and welcoming independent observers on their vessels.

Fishermen have long shared information and innovated to make gear more selective and efficient. Yet bycatch is still a problem in many fisheries and regions of the U.S., and the waste is significant: Approximately 20 percent of the total commercial catch is discarded. As NOAA Fisheries Administrator Eileen Sobeck recently wrote, bycatch “threatens the continued sustainability and resiliency of our local fishing communities, regional economies, and ocean ecosystems.” With so many examples of solutions, why are we still struggling with bycatch?

The answer is simple: Solutions follow when fishery managers are unambiguous about reducing bycatch—for instance, by setting and enforcing meaningful bycatch caps. But this isn’t happening everywhere, because the chief law governing U.S. fisheries, the Magnuson-Stevens Fishery Conservation and Management Act, directs managers to minimize bycatch only “to the extent practicable”—which has, unfortunately, often been used as an excuse to avoid taking concrete action.

What is truly not practicable is wasting fish. To improve fish conservation, we need the law, which is due for an update, to be clear. We need a mandate to minimize bycatch. Period.