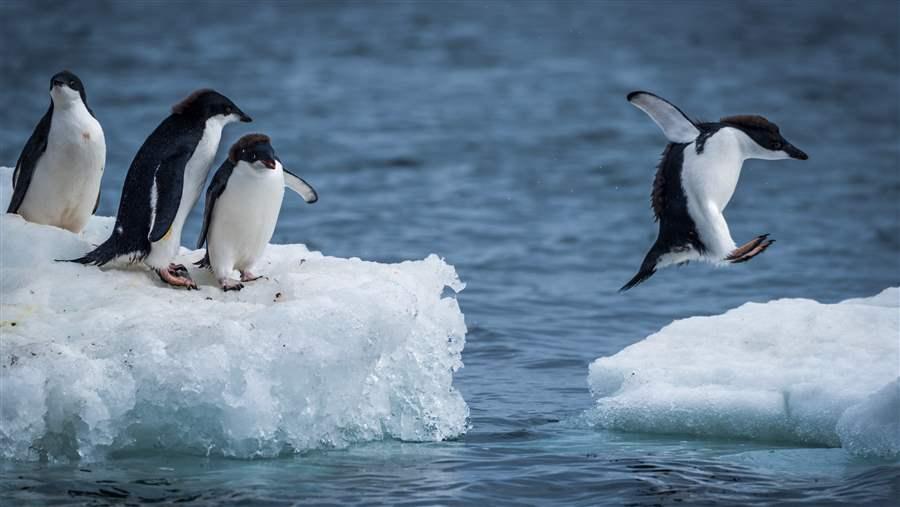 An Adélie penguin jumps a gap in the ice in the Southern Ocean, home to the recently designated Ross Sea Region Marine Protected Area.

When it was created in October of last year, the Ross Sea Region Marine Protected Area (MPA)—in the Southern Ocean surrounding Antarctica—was rightly celebrated as the largest MPA in the world. Less widely reported was the fact that the reserve is also home to more penguins than any other marine protected area. Let’s get to know some of those tenacious flightless birds and encourage the multinational marine conservation organization that oversees the Southern Ocean, the Commission for the Conservation of Antarctic Marine Living Resources (CCAMLR), to further protect their habitat by creating more MPAs.

The Ross Sea is home to 26 percent of all emperor penguins and 38 percent of all Adélie penguins on Earth. Arguably the most famous penguin species, emperors are the only one that breeds during the Antarctic winter. Adélies hunt and rest on sea ice but need ice-free land to breed and often nest in very large colonies of up to 200,000 pairs. Click here to to learn about penguins of the world.

These days, most headlines about Antarctica feature alarming news about glaciers, including one the size of Delaware poised to break off from the continent, and another—the biggest in East Antarctica—that is rapidly melting from below. These stories focus on how such events will affect humans around the world, but the news should also underscore the importance of expanding crucial protections across the entire Southern Ocean in order to help protect the animals, including penguins, found in the region.

The Ross Sea Region MPA set a precedent for high seas protections—the first time international cooperation has led to creation of a large-scale MPA. The 25 member governments that comprise CCAMLR agreed by consensus to ban commercial fishing in over 2 million square kilometers, including the waters currently under the Ross Ice Shelf. The MPA, which is twice the size of Texas, covers two-thirds of the Ross Sea and includes important biodiverse areas such as portions of the continental shelf and slope, and the waters around the Balleny Islands, as well as the Admiralty and Scott seamounts. 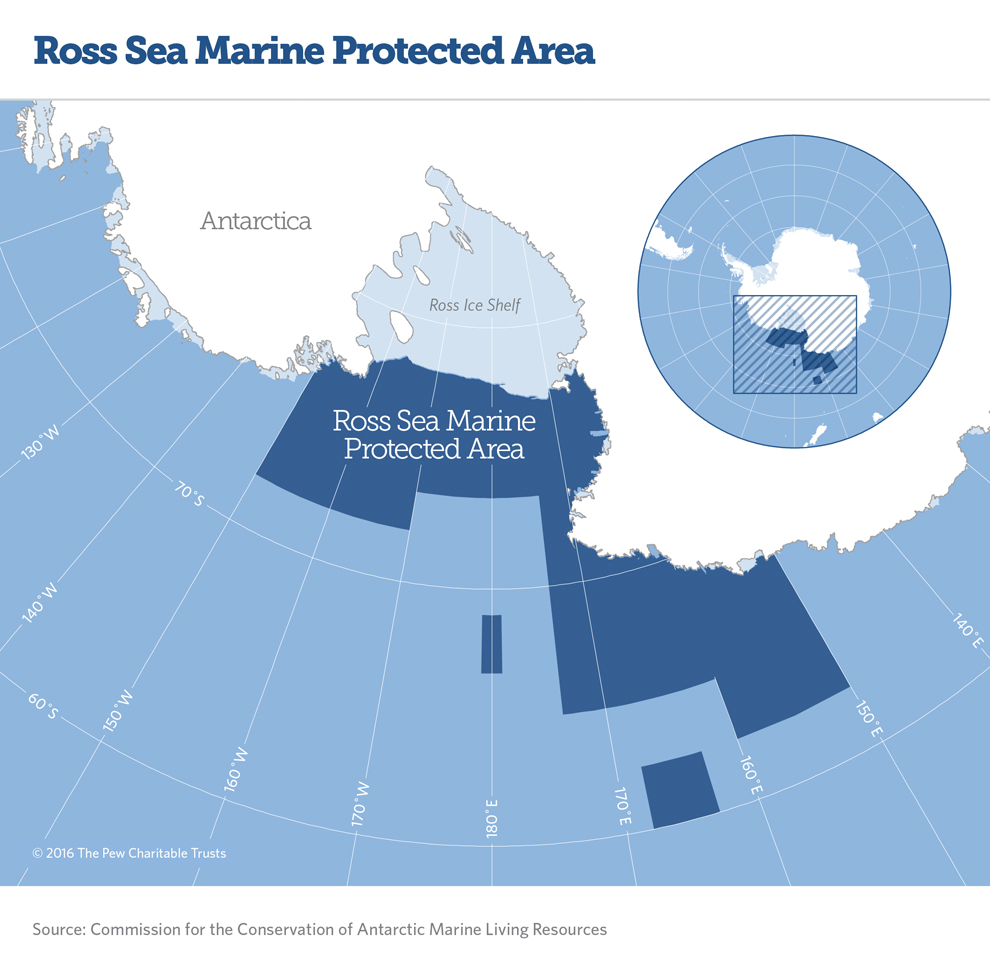 CCAMLR, which meets annually every October, is considering two additional MPA proposals—one in the waters of East Antarctica, which has been under discussion since 2011, and another, proposed in 2016, in part of the Weddell Sea. More new MPA proposals for regions including the Antarctic Peninsula and others are expected in the coming year or two.

While the Ross Sea MPA is large, it is only a small portion of the vast Southern Ocean, which covers over 20 million square kilometers. With nutrients that upwell from the icy depths and a massive circumpolar current that feeds into other oceans, the waters around Antarctica have a big influence on seas near and far. And like animals anywhere, the species that thrive in the Southern Ocean won’t abide boundaries drawn on paper. In order to achieve the greatest possible conservation impact, CCAMLR needs to continue its efforts to create a broader network of protected areas throughout the region.

The Ross Sea protections will help build ecosystem resilience and provide both a refuge for species and a valuable reference area for scientists studying climate change. CCAMLR can help expand those benefits by establishing MPAs throughout the region and bringing the world closer to protecting 30 percent of the global ocean, which scientists strongly recommend; now, only around 3 percent of the ocean is protected in large reserves. 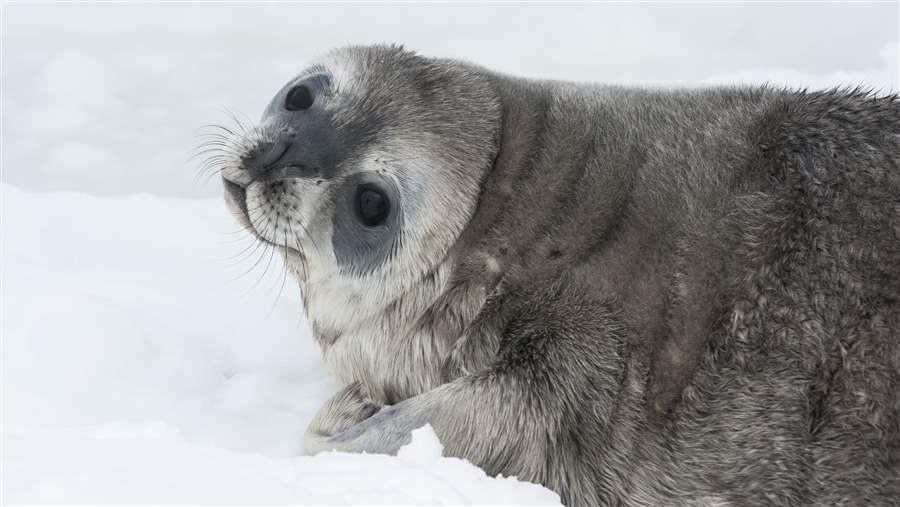 An MPA in the Weddell Sea would protect the habitat of Weddell seals and pups, like the one seen here. 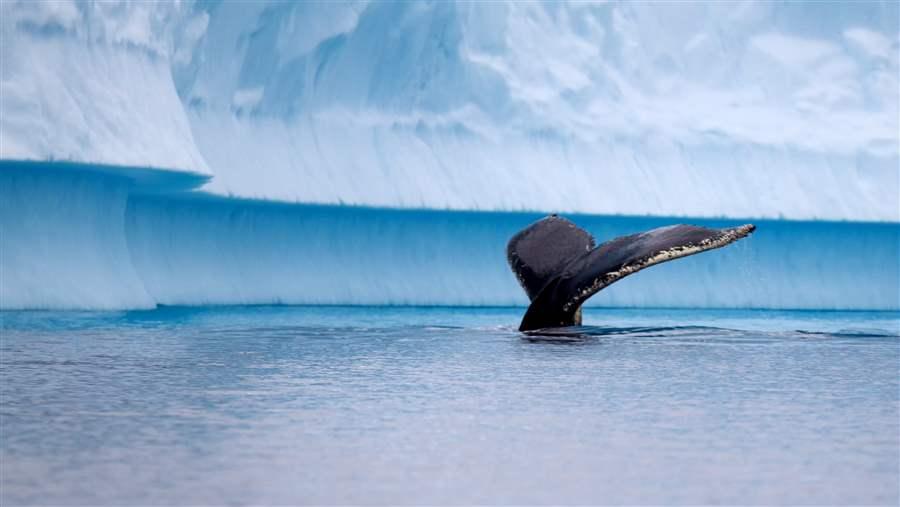 A humpback whale’s fluke stands in arresting contrast against the background of an iceberg in the waters of East Antarctica, one of the areas under consideration for a new marine protected area.

In 2002, CCAMLR made its first commitment to establish a network of MPAs around the Southern Ocean, and in doing so recognized the need to conserve Antarctic wildlife and to set policies based on the precautionary approach and the best available science. The commission reaffirmed its pledge to the MPA network in 2011 when it adopted Conservation Measure 91-04 as a guideline for designing MPAs around Antarctica. Since then, the Ross Sea Region MPA has been the only proposal to be successfully designated, and CCAMLR is now five years behind its own timetable for implementing a network of MPAs. 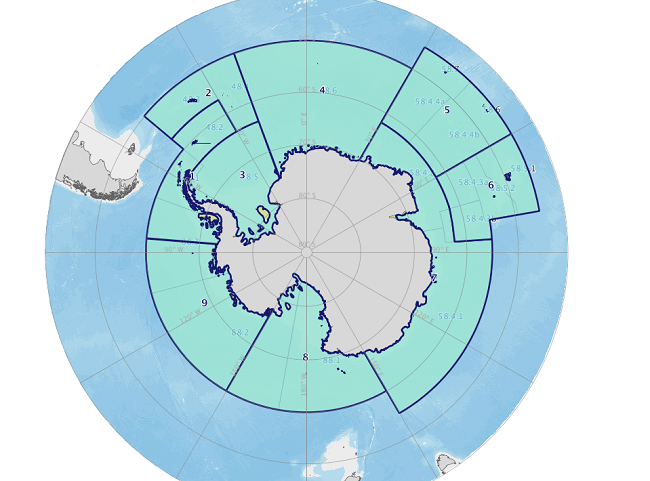 Credit: Commission for the Conservation of Antarctic Marine Living Resources

The time for delay is over. Pew’s penguin campaign—along with conservation groups from around the world, governments including the European Union, Australia, France, Germany, Argentina, and Chile, and cold water swimmer and Antarctic advocate Lewis Pugh, who is spreading his “speedo diplomacy” globally—is working to achieve three MPA designations in the Southern Ocean by 2020.

CCAMLR members have shown that they can work together and take action, and the Ross Sea Region MPA designation was a laudable first step. A network of MPAs around Antarctica would leave a lasting legacy of science-based conservation to the world and would help to ensure healthy populations of penguins and other wildlife in the region. Let’s hope that CCAMLR adopts more Southern Ocean protections when it gathers for its annual meeting in October.

Many Threats for Declining Number of Penguins

According to the International Union for Conservation of Nature, most penguin species are in decline. Although penguins share many characteristics, the threats they face vary according to colony location, contact with humans and other predators, and dependence on sea ice.