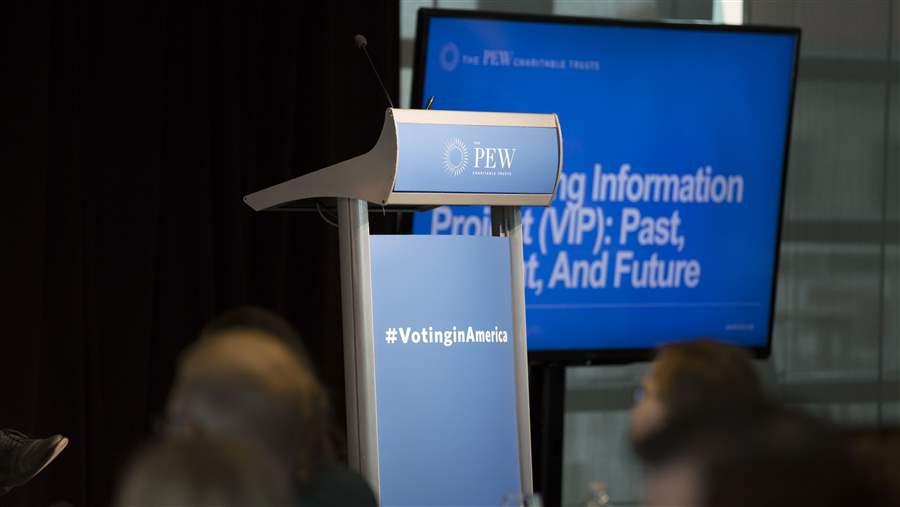 The “Voting in America” (VIA) 2016 summit brought together the election community—state and local officials, academics, lawyers, advocates, campaigns, funders, and media representatives—to conduct a deep dive into the performance of state election systems during the 2016 cycle.

“No matter what side you were on, we can all agree Americans went to the polls and proved that the system works,” said Michael Caudell-Feagan, vice president of The Pew Charitable Trust, about the November election. “But the election story isn’t just about the voters. It’s about how well the election system performs—the ability of Americans to register, find their polling places, and cast their ballots.”

Caudell-Feagan set the tone for the “Voting in America” (VIA) 2016 summit, held at the Newseum in Washington on Dec. 8. The daylong program brought together the election community—state and local officials, academics, lawyers, advocates, campaigns, funders, and media representatives—to conduct a deep dive into the performance of state election systems during the 2016 cycle. Since 2008, when the first VIA summit was held, “so much has changed,” Caudell-Feagan said. “Americans’ ability to express their preferences through the ballot was more efficient than ever before.”

According to the 2016 Survey of the Performance of American Elections, the overall experience of voters on Election Day was positive, said Charles Stewart III, the Kenan Sahin distinguished professor of political science at the Massachusetts Institute of Technology, who presented his preliminary analysis of the new data to the audience.

Among voters who cast ballots on Election Day and through early voting, 81.2 percent said things were run very well at their polling places, said Stewart. They reported that the U.S. has “a competent, well-run system that allows them to express the vote they wish. And that extended to people who voted by mail. Even given the rhetoric behind the process, nonetheless, voters feel good about what they observed,” he said.

This might be surprising at a time when voters are expressing anxiety about the future, high distrust in government, and doubts about America’s role in the world. Michael Dimock, president of the Pew Research Center, provided further context for the overall mood of the voting public.

“In the past 10 years, only around 19 percent of Americans trust the government to do what is right most of the time or just about always,” he said. “At the same time, we’re seeing a troubling trend in partisan animosity. There’s a growing fear and distrust of the other party. In April 2016, 58 percent of Republicans and 55 percent of Democrats said that the other party is a threat to the nation.”

Also of note: The 2016 election was objectively the worst campaign Americans have ever seen; 92 percent of Americans reported “more mudslinging” than usual, Dimock said.

Despite tensions surrounding the campaigns, both Democrat and Republican respondents agreed infrastructure, college affordability, drug addiction, and jobs should all be priorities for the new administration and Congress. VIA participants at the Newseum also found several topics of mutual interest regarding how elections are conducted in the United States.

The Voting Information Project (VIP) is a primary example of a collaborative effort many disparate parties have supported since its inception in 2008.

VIP, a partnership among the states, Google, and Pew, provides voting tools that help people get to the polls and cast a ballot. Pew works with the states to provide official information about where to vote and what’s on their ballots. Google provides the technological expertise to power the tools, which are available to any state, nonprofit, business, or other entity that would like to use them.

On Election Day, and in the weeks leading up to it, the tools were available in—quite literally—countless places on the web and through mobile apps, and often customized by individual sites.

“You could find information if you were scrolling Facebook, shopping on Etsy, checking the weather on Weather Underground, or trying to find a place to eat on Foursquare,” said one of VIP’s founders, Doug Chapin, now with the Humphrey School of Public Affairs at the University of Minnesota.

The VIP tools had 123 million impressions, said Chetan Sabnis, engineering site lead with Google DC. “One month ago, 35 percent of all global search traffic was interested in the U.S. election. We’re interested in making the voting mechanics useful to our users,” Sabnis said. “This is only possible through VIP, because the data comes to us in a formed product.”

Facebook, a key VIP partner, drove significant traffic to the VIP site. “On Election Day, 118 million people talked about the election on Facebook, and the topic was shared with 700 million friends, said Samidh Chakrabarti, product manager for civic engagement for the site. “Seeing that civic passion was really inspiring.”

What else can we do?

Participants also discussed how they could improve the electoral process for an electorate that has shown it prefers alternate forms of voting, such as mail-in ballots and going to the polls before Election Day.

Election officials from Colorado, North Carolina, Oregon, West Virginia, and Wisconsin, including their secretaries of state, all shared ideas.

“We all need to be driving turnout,” said Judd Choate of the Colorado secretary of state’s office. Choate suggested that election administrators develop relationships with their state motor vehicle agencies to better automate their motor-voter processes, mail ballots to voters, and offer same-day registration, and that administrators join ERIC—the Electronic Registration Information Center, a partnership of state election officials that employees technology to match voter records across state lines to improve the accuracy of voter lists.

“Online voter registration has allowed us to do some extraordinary things,” said Washington Secretary of State Kim Wyman. “More people use online tools than go to the DMV”—Department of Motor Vehicles. Wyman’s office also created a tool called MyVote that allows people to update their voter registration information by phone.

Nonprofit representatives had ideas of their own. “Being an election administrator is an amazing profession,” said Tammy Patrick of the Bipartisan Policy Center and a member of the Presidential Commission on Election Administration. “What if we provided information about the profession to young people? That would provide a better understanding of the whole process to voters.”

Still, getting Americans to the polls remains a top priority, and a bipartisan one. Ben Ginsberg, co-chair of the presidential commission, said, “It’s really one of those issues where Democrats and Republicans agree—every qualified voter should be able to vote.”

Alexis Schuler is senior director of state campaigns for The Pew Charitable Trusts.