From a peak of 1 in 100 in 2007-08, the U.S. incarceration rate has dropped back to 1 in 115 adults, according to an analysis of federal Bureau of Justice Statistics data conducted by The Pew Charitable Trusts.

The incarceration rate, which includes offenders in state and federal prisons and local jails, fell 13 percent from 2007 to 2015, a level not seen since 1998. However, it is still more than three times higher than it was for most of the 20th century.

In addition, the adult community supervision rate, which comprises those under the supervision of federal, state, and local probation or parole officers, declined 17 percent, from 1 in 45 to 1 in 53, during that same eight-year span.

The decrease in the incarceration and community supervision rates led to a 16 percent reduction in the total rate of adults under correctional control, from 1 in 31 (approximately 7.3 million adults) in 2007 to 1 in 37 (about 6.7 million adults) by the end of 2015. 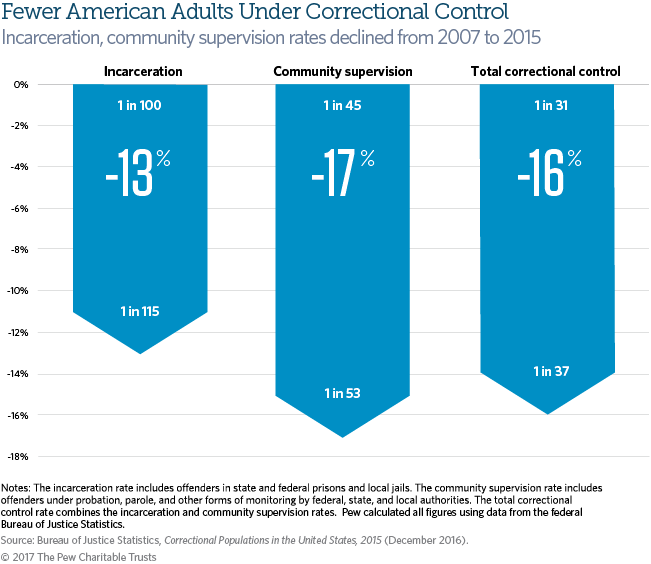 The declining U.S. correctional population comes amid a succession of research-based state and federal policy changes that have improved pretrial, sentencing, release, and community corrections practices. Since 2007, 33 states have revised their sentencing and corrections laws through the Justice Reinvestment Initiative, a public-private partnership that includes the U.S. Justice Department’s Bureau of Justice Assistance, Pew, the Council of State Governments Justice Center, the Crime and Justice Institute, and other organizations. Other states, including California, have adopted new policies as a result of court orders and through public ballot measures. Although the specific reforms vary from state to state, they all aim to improve public safety and control taxpayer costs by prioritizing prison space for violent and chronic offenders and investing some of the savings in alternatives to incarceration that are effective at reducing recidivism among low-level offenders.

Amid reforms, crime continues to decline

Sentencing and corrections reforms have cut incarceration rates without negatively affecting public safety. From 2010 to 2015, the nation’s imprisonment rate fell 8.4 percent while the combined violent and property crime rate declined 14.6 percent, according to statistics from the U.S. Department of Justice. Thirty-one states cut both rates simultaneously.

Separately, the rates of violent and property crime reported to law enforcement have dropped by more than half since their 1991 peaks, returning to levels not seen since the late 1960s. National, state, and local crime rates shift for complex and poorly understood reasons, but experts believe that the long-term decline is the result of a combination of factors, including more effective policing, the waning of the crack cocaine epidemic, the spread of car theft prevention devices and other anti-crime technologies, the reduced use of cash in favor of electronic payments, and the incarceration of high-risk offenders.

An earlier Pew analysis found that crime rates dropped faster over the five-year period in states with larger prison rate declines. Along with other evidence and research, these tandem trends help demonstrate that states can have less imprisonment and less crime at the same time.

Crime dropped faster in 2015 in states with larger prison declines

Over the five-year period from 2010 to 2015, the nation&rsquo;s imprisonment rate fell 8.4 percent while the combined violent and property crime rate declined 14.6 percent, according to statistics released by the U.S. Department of Justice. Thirty-one states cut both rates simultaneously.