When the Western and Central Pacific Fisheries Commission (WCPFC) meets in Nadi, Fiji, from Dec. 5-9, member governments will have the opportunity to protect tuna and shark populations of critical importance to the region, including Pacific bluefin and bigeye tunas.

The WCPFC is the international body made up of governments with fishing interests in the western and central Pacific Ocean, waters that supply 57 percent of the world’s tuna catch. Despite its mandate to sustainably manage and ensure the long-term conservation of tunas and sharks, the WCPFC’s conservation and management measures have been inadequate to end or prevent overfishing of some key stocks. In addition, the Commission has not kept up with global expectations for best practices. 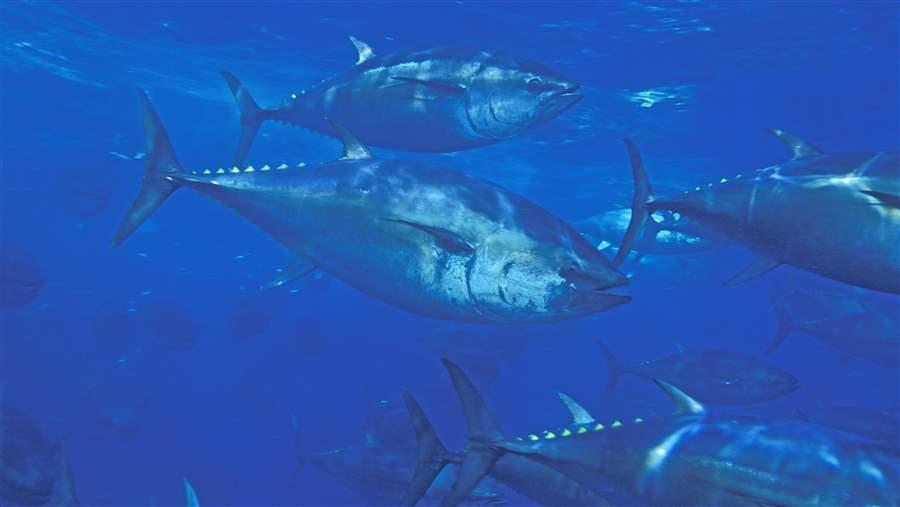 Pacific bluefin tuna have been fished down more than 97 percent from original levels.

Pacific bluefin at a critical juncture

Pacific bluefin tuna is one of the world’s most valuable fish and is prized for use in sushi and sashimi in Japan. The great demand has caused a dangerous decline in the species and led to continued overfishing. According to the latest stock assessment, Pacific bluefin has been depleted to just 2.6 percent of its historic size, and there is little indication that countries fishing this species will enact smart, science-based catch limits. That means there is less than a 1 percent chance that the population will recover under the management measures now in place.

As a result, WCPFC members should agree to implement a two-year moratorium on all commercial fishing for Pacific bluefin without delay. Pew called for a Pacific-wide moratorium in July. This would immediately end overfishing and give the stock time to rebuild. If such a moratorium is not implemented, a stronger action—such as a trade ban through the Convention on International Trade in Endangered Species of Wild Fauna and Flora—might be the only option. 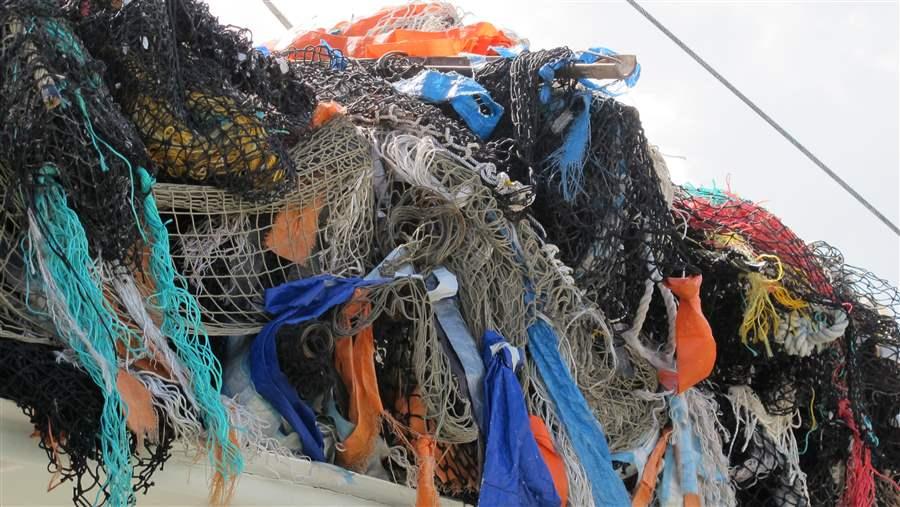 Fish aggregating devices and the material to make them can be seen on purse seine vessels in Micronesia.

Fish aggregating devices (FADs) are floating objects that fish congregate beneath. Purse seine vessels cast their nets around these objects to scoop up large amounts of fish. Ships fishing on FADs catch predominantly small and juvenile bigeye, taking them from the ecosystem before they have a chance to reproduce.

Adult bigeye, on the other hand, are targeted by longline vessels. The species has experienced overfishing for years and is now depleted to about 16 percent of its unfished level, a “danger zone” in the health of the stock. It is essential that WCPFC members adopt a timeline to rebuild Pacific bigeye to a healthier state and to reduce juvenile mortality.

WCPFC has a FAD Working Group in place to recommend improvements in management of the devices. Its progress must be reviewed, and the group should be given clear tasks that lead to the development of direct controls on the catch of juvenile bigeye. 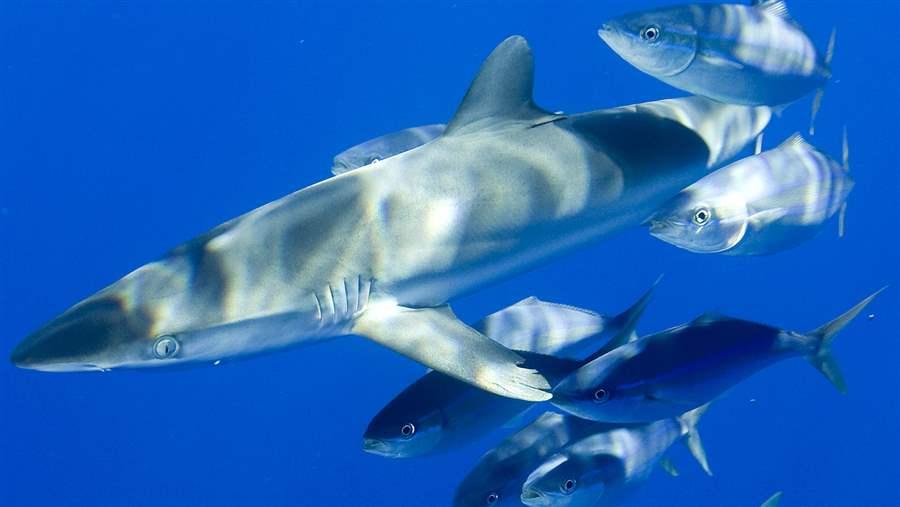 Silky sharks are a highly vulnerable species found within the WCPFC Convention Area. Though retention is prohibited, certain types of gear still catch these sharks and should be banned.

According to one estimate, 100 million sharks are killed in the world’s commercial fisheries each year, primarily for their fins. Among the targeted species is the South Pacific blue shark. At its last meeting, the WCPFC received no management advice on this shark because scientists lacked sufficient data. Until stronger population assessments can be made, WCPFC must cap current fishing for these sharks and expand observer coverage on the vessels most likely to catch them. A “no data, no fish” policy also could help ensure that countries that do catch sharks submit information on landings to improve the data.

In addition to blue sharks, silky and oceanic whitetip sharks are found within the Convention Area. WCPFC has prohibited retention of these sharks because they are highly vulnerable. Unfortunately, they still fall victim to certain types of gear. WCPFC should completely ban wire trace and shark lines to reduce the fishing mortality of silky and oceanic whitetip sharks. 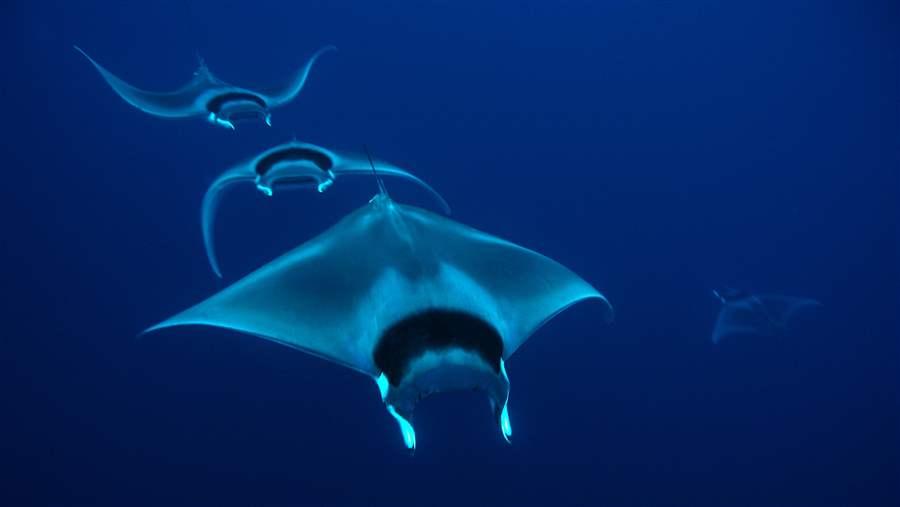 Mobula rays are particularly vulnerable and are often killed as bycatch in purse seine fisheries.

Manta and mobula rays are highly vulnerable to overfishing. They are often killed as accidental bycatch in purse seine fisheries in WCPFC waters. To protect the species, WCPFC should implement a complete ban on retaining these rays and develop guidelines for live release when caught.

Port State measures (PSMs) can help monitor compliance and prevent illegally caught fish from entering the market. However, WCPFC members have fallen short for several years and have adopted no such measures. But with the multinational Port State Measures Agreement entering into force this year, momentum is growing around the globe.

The WCPFC can play a key role in helping members have effective controls in place for their ports. It should adopt PSMs this year or establish a working group to ensure that minimum standards for port inspections are agreed to in 2017.

Technological advances such as electronic reporting and monitoring systems can be used along with PSMs to strengthen fisheries management and better combat illegal, unreported, and unregulated fishing. The WCPFC lags behind other regional fisheries management organizations in adopting these technologies, though some member countries are already using them effectively in their domestic fisheries.

It is essential that the WCPFC adopt guidelines and standards that allow for 100 percent electronic reporting of catch—as well as 100 percent observer coverage on longline vessels—to ensure that data are accurate and fishing is in compliance with management measures.

With limited electronic monitoring, fishermen continue to engage in illegal ship-to-ship transfers at sea of tuna and other pelagic fish stocks with an estimated value of $142 million a year. Until WCPFC can provide evidence that transshipment can be done legally, it should ban this practice and establish a formal process to ensure that the transferring of catch is done the right way.