On Dec. 9, 2016, President Barack Obama issued an executive order designating the globally significant U.S. northern Bering Sea and Bering Strait region as the Northern Bering Sea Climate Resilience Area. Learn more about the communities and wildlife in this special place, the stresses and climate change impacts they face, and how strong leadership from regional tribes led to today’s action.

The health, well-being, and culture of these indigenous communities are fueled by resources such as marine mammals, fish, birds, algae, shellfish, and other invertebrates. Hunting of large marine mammals can take place as far as 80 miles from shore. 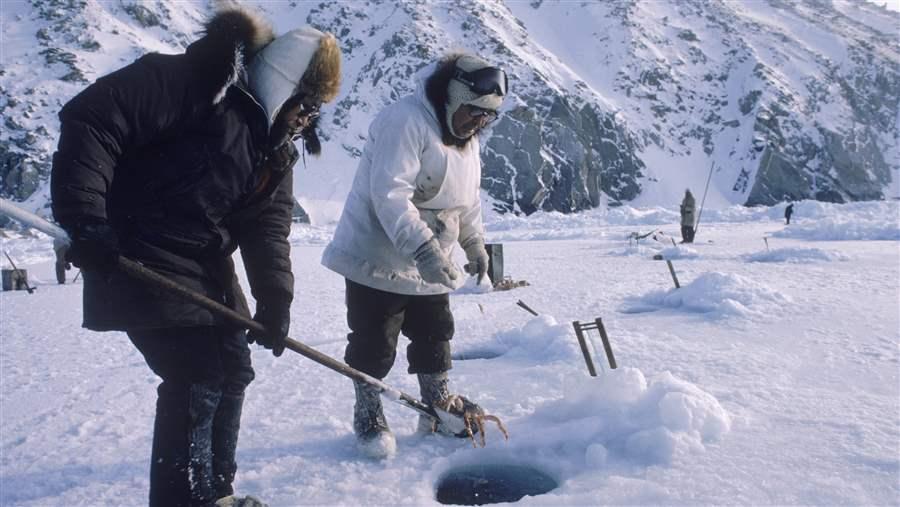 The northern Bering Sea is rich in organisms such as clams and crabs. Here, men fish for crab on the frozen waters around the island of Little Diomede.

The executive action comes at the request of indigenous residents of the region, the Bering Sea Elders Group, and two nonprofit consortia representing over 70 tribes: Kawerak Inc. and the Association of Village Council Presidents. 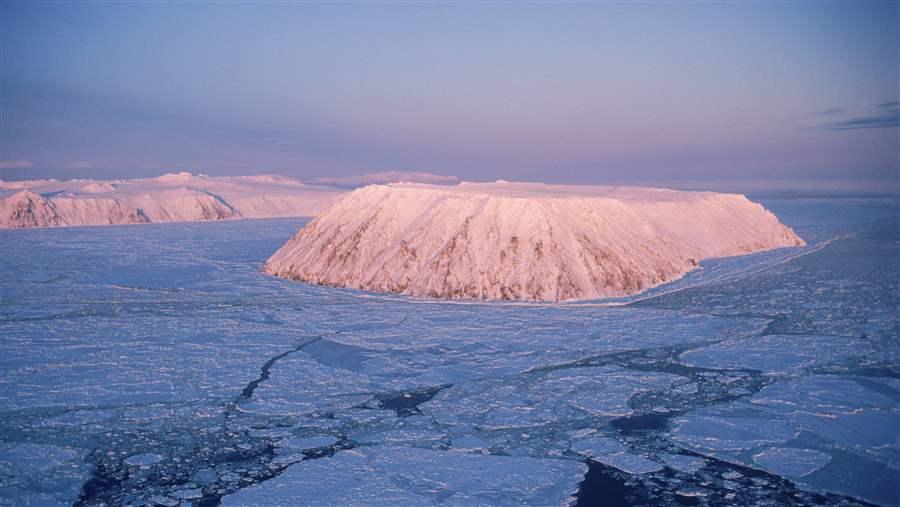 The Bering Strait is relatively narrow at 44 nautical miles across, with the islands of Little Diomede (U.S., foreground) and Big Diomede (Russia, background) in the middle. It is a natural chokepoint for marine traffic and wildlife migrations between the Arctic and Pacific oceans.

The northern Bering Sea and Bering Strait region, seasonally covered in sea ice, is a highly productive area extensively used by many species 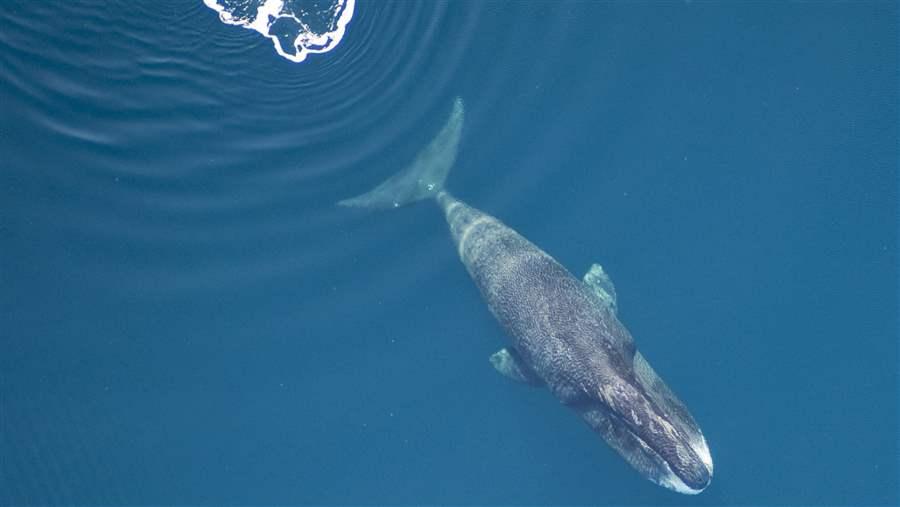 Almost the entire western Arctic population of bowhead whales, such as this one, migrates through the northern Bering Sea twice each year. These slow-moving whales are sensitive to fast-moving ships, noise, and smells.

This measure was carefully implemented by the North Pacific Fishery Management Council in 2008. The new executive order maintains this protection.

These fisheries include salmon, crab, halibut, and herring and will continue to operate in the new protected area. 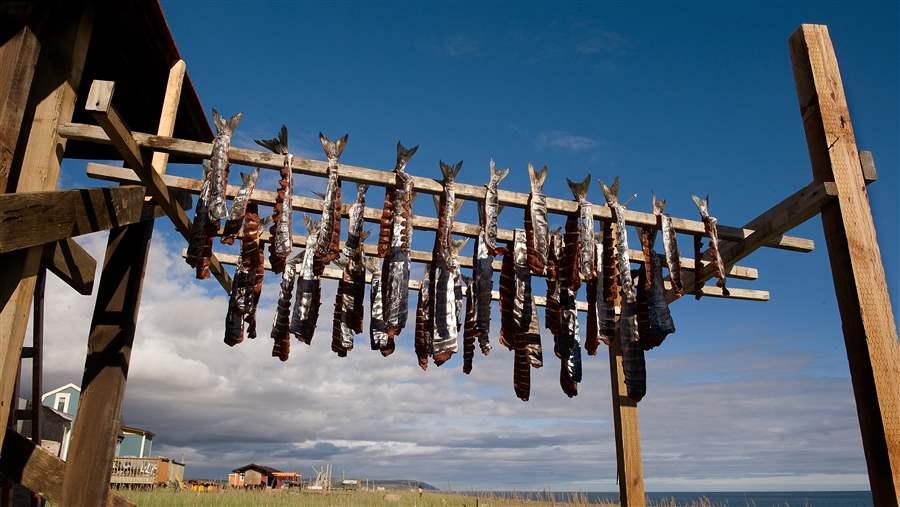 Salmon dry in the sunlight. Traditional methods of securing, preparing, and preserving foods are a strong component of indigenous community life in the region.

In the next decade, ship traffic through the region is projected to increase by 100 to 500 percent. Communities worry about potential impacts from marine pollution, including sewage and food waste. The president’s order directs agencies to develop solutions to limit vessel discharge in the most ecologically sensitive areas.

For decades, consideration of offshore oil and gas leasing in the region’s federal waters was met with concern from tribes

Today’s action permanently protects those areas from consideration of any future leasing. 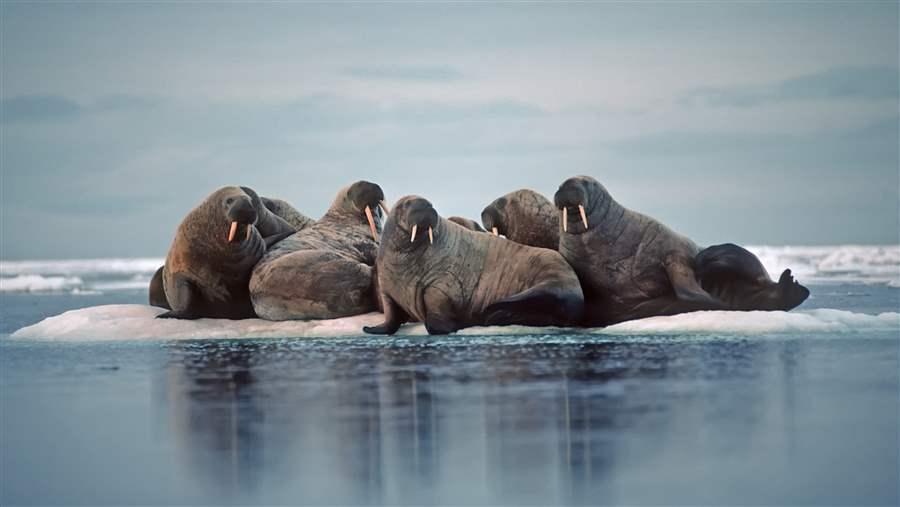 Walruses, such as those shown here, are among the most important cultural and subsistence resources in the Bering Strait region. They use the ice as a platform to dive for food at the seafloor, haulout, and give birth. The entire population of Pacific walrus overwinters in the Bering Sea.

The Pew Charitable Trusts commends today&rsquo;s action by President Barack Obama to protect federal waters in the northern Bering Sea and Bering Strait off the west coast of Alaska.