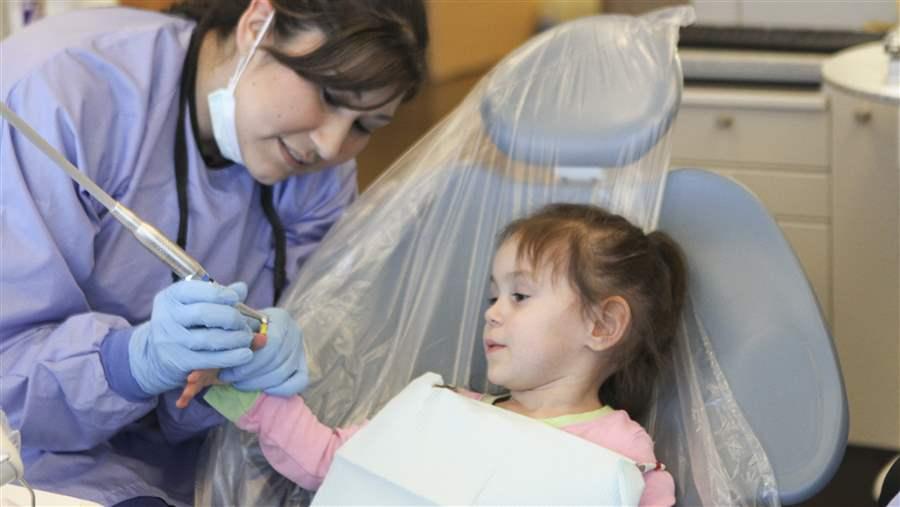 Overall, since 1999-2004, children have seen improvements in oral health, but adults have not, with untreated decay rates climbing most steeply for low-income seniors.

Tooth decay rates over the past 15 years have declined for children but have risen for adults, with poor seniors experiencing the largest increases, according to a new analysis of government data.

Yet large health disparities by income persist for all age groups. Gaps have significantly widened between lower- and higher-income seniors since 1999-2004, while narrowing for children and remaining relatively stable for working-age adults.

Overall, since 1999-2004, children have seen improvements in oral health, but adults have not, with untreated decay rates climbing most steeply for low-income seniors. Today, the picture for those living in poverty remains sobering. For this group, 1 in 4 children, nearly half of all working-age adults, and more than 40 percent of seniors have unaddressed tooth decay.

Here is a closer look at the data:

According to the HPI analysis, in 2011-14 about 25 percent of children in poverty had untreated tooth decay (also known as caries), such as cavities, nearly three times the rate for children living at or above 400 percent of the federal poverty level (FPL) ($79,000 for a family of three). Since 1999-2004, the untreated caries rate dropped from 33 percent for children in poverty, while remaining fairly stable at about 9 percent for children at 400 percent FPL and above.

The decline in untreated decay rates for children coincided with the growth in the number of children with dental insurance—largely through increases in Medicaid enrollment—and with an increase in Medicaid-enrolled children accessing dental care. The result is that overall, more children are receiving care, with the largest gains among children from families with incomes up to 200 percent FPL.

Untreated caries rates increased from 26 to 30 percent for this age group between the two data sets, with significant increases for adults living in poverty (from 42 to 48 percent). Untreated decay rates are more than three times higher for poor adults than for those living at or above 400 percent FPL (about $47,000 for an individual). Hikes in untreated decay rates among low-income working-age adults corresponded with a drop in private dental coverage for this group between 2000 and 2014.

Although dental utilization rates over the past decade remained relatively stable for seniors, the population of Americans over 65 has increased, as have the rates at which elderly people keep their teeth, which necessarily increases the risk of decay.

U.S. seniors are keeping their teeth longer than they did in the past, yet many are unable to access preventive dental care or treatment to keep their mouths healthy. Senior citizens&mdash;those 65 and older&mdash;made up 15 percent of the U.S. population in 2014, and their share of the population is expected to nearly double by 2060. As the number of older Americans increases in the coming decades, the demand for care for this age group will intensify.