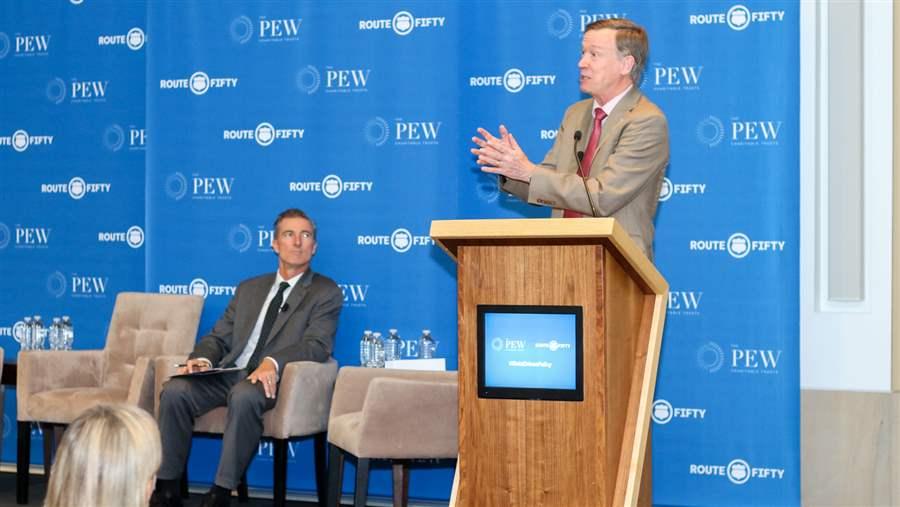 Even the best data may not drive positive, lasting policy change if they aren’t properly interpreted, shared, and acted upon. That was the main takeaway from an Oct. 14 event in Denver on evidence-based governing, led by The Pew Charitable Trusts and Atlantic Media’s Route Fifty. The public forum focused on data-driven policymaking in Colorado and highlighted how the state has become a model for others.

“Americans want and expect their tax dollars to be spent wisely,” Pew Vice President Tom Conroy said in opening the event. “State leaders across the country, and particularly here in Colorado, are joining a growing trend of using data, facts, and evidence to ensure that state funds are expended on programs that bring the greatest return on investment and serve the public interest.”

“It’s not just having the facts. It’s using them in creative ways that makes them very powerful,” Gov. Hickenlooper said. He added that, as a two-term mayor of Denver and governor, he has strived to get the affected parties together to examine the facts and understand their impact.

For example, Gov. Hickenlooper noted that Denver residents, suburban dwellers, and those in rural areas often spar over water rights.

“When I noted that suburban water use was draining the reserves, the city folks said, ‘Aha! Their time will come’ and they’ll be out of water. Well, sure, but if they run out of water and stop issuing building permits for a couple years, it’s going to affect the value of every home in Denver.” Showing urban residents those data helped them see how actions across the state are interconnected.

One mechanism that has helped Colorado officials use relevant information, Gov. Hickenlooper said, is the State Measurement for Accountable, Responsive, and Transparent (SMART) Government Act, which requires each state agency to outline its top five goals and to track data on progress toward those goals. While that act passed before he became governor, Gov. Hickenlooper says he is improving on it by insisting that agencies share data to better serve residents. “You need to get the facts from one agency to another quickly and make sure that your silos aren’t blocking” that information flow, he asserted.

Williams noted that 70 percent of residents preferred to vote by mail, in part because Colorado ballots include initiatives and judicial candidates, and voters like to research those decisions at home, with their ballots in hand. In 2013, the state moved to an all vote-by-mail model, while still accommodating in-person voting at vote centers on Election Day. Coloradans have the option of returning their ballot through the mail or dropping it off at a 24-hour ballot drop box location, which election officials hope will reduce incidences of late-arriving mail-in ballots. Colorado also instituted same day registration and eased residency restrictions to further open access to the ballot to eligible voters.

“We were one of the first states to offer online voter registration and the first to optimize it for mobile devices,” Williams said.

The city and county of Denver recently launched a ballot-tracing system that sends voters a text or email when their ballot is processed, accepted, and recorded, said Amber McReynolds, director of elections for that jurisdiction. “Now we’re getting much fewer [complaint] calls,” she said.

Through all of its voter-focused efforts, Colorado reduced provisional balloting by 98 percent, raised voter satisfaction, and ranks near the top of Pew’s Elections Performance Index, which measures how well a state does in managing and conducting an election.

The final panel of the event featured a discussion on how states can use evidence to measure the costs, benefits, and impacts of tax expenditures—credits, deductions, and exemptions that lower a state’s tax revenue. Such expenditures are not regularly reviewed, said Robert Zahradnik, policy director of Pew’s state fiscal health and economic growth project. “Most states don’t really have a sense whether the expenditures are delivering a return on investment, and that was the case in Colorado.”

In fact, Colorado state Representative KC Becker pointed out that tax expenditures, some dating to the 1930s, were costing the state about $5 billion annually.

This past June, Colorado’s General Assembly, led by the bipartisan Joint Budget Committee, voted to require regular, rigorous, independent evaluations of economic development tax incentives and other tax expenditures to ensure that they are worth the investment, meet their goals, and obtain the best results for businesses, workers, and taxpayers.

Since 2012, more than 20 other states have passed or improved such laws, Zahradnik said.

Conducting evaluations is a proven way to ensure that tax incentive programs are serving the needs of states’ budgets, economies, and taxpayers. Minnesota, for example, hired a consulting firm to review a tax credit that was designed to encourage investments in small businesses. The consultants found d that some of the individuals that received credits were serving as executives or board members at the companies in which they invested. They argued that these “inside investors” were less likely to need the incentives to encourage them to invest, since they already had a personal stake in the success of the companies.

“The legislators said, ‘That wasn’t our intent,’” Zahradnik said. “They tweaked the eligibility criteria to get rid of some of that insider investing. That’s a case where a compelling finding drew the Legislature to make a change.”