In southern Utah, the Bears Ears area is bordered on the west by the Colorado River, on the south by the San Juan River and the Navajo Nation, and on the east by the White Mesa Ute Reservation. The area, which has been proposed for protection as a national monument, harbors more than 100,000 archaeological sites, including cliff dwellings and rock art, and sustains Native Americans’ traditional way of life.

Here are five reasons that President Barack Obama should protect Bears Ears as a National Monument: 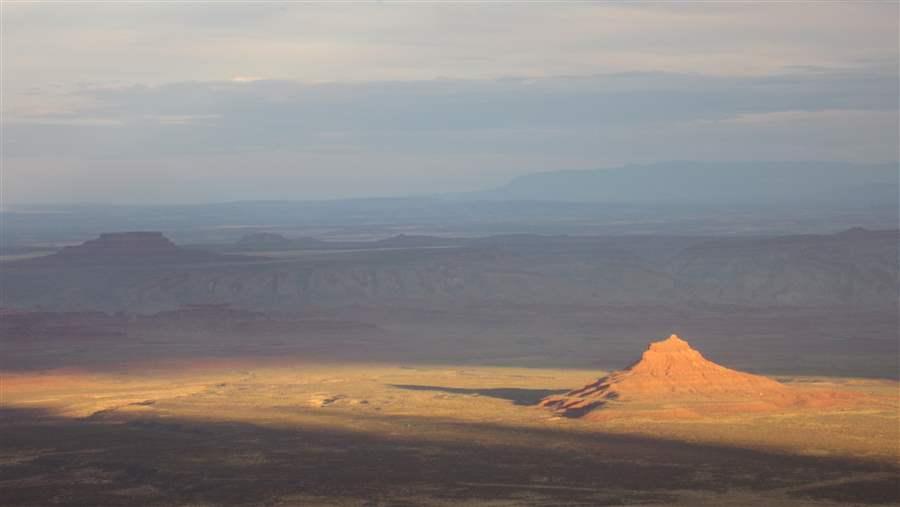 A sunset highlights a red-rock butte in an area known as Valley of the Gods. 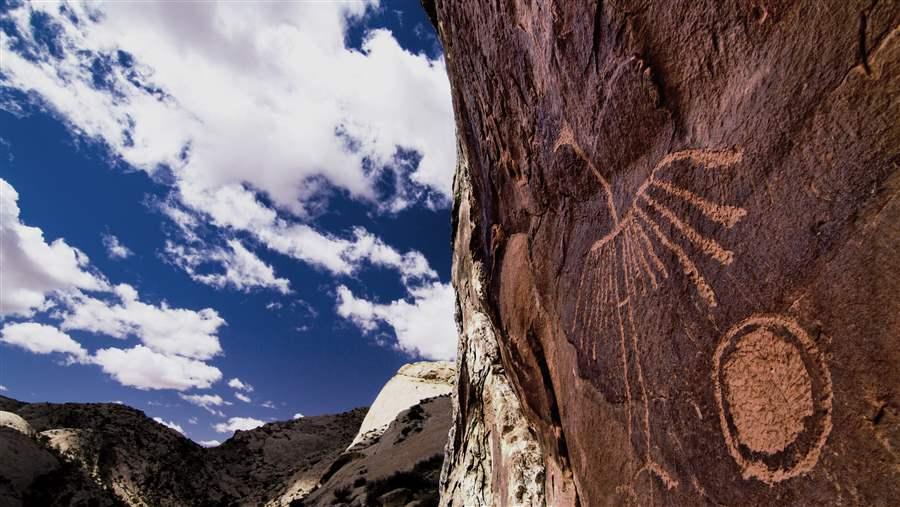 Tribal leaders and members go to the Bears Ears area to conduct ceremonies, practice healing rituals, and connect with their ancestral lands in many other ways.

This place is so sacred to Native Americans that 26 tribes joined together for the first time to ask President Barack Obama to protect Bears Ears by designating it as a national monument that would honor their connections to the land and protect priceless cultural resources. 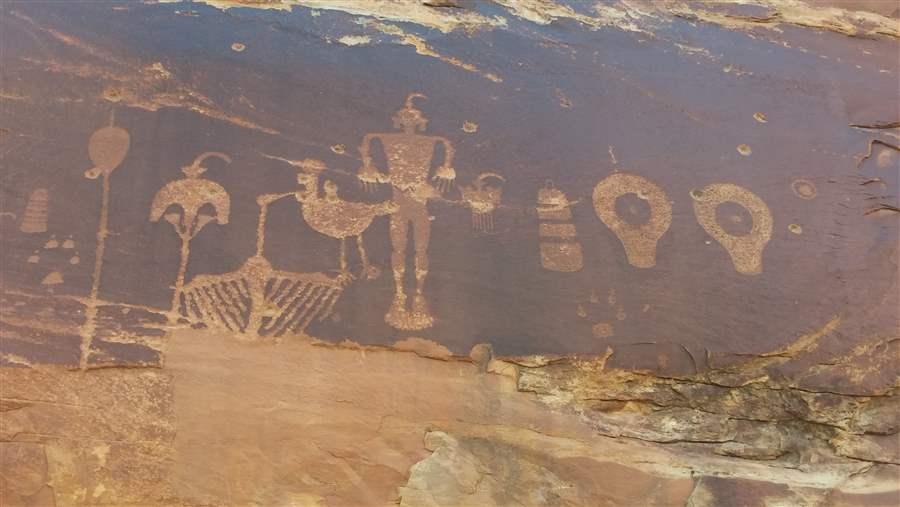 A petroglyph known as the wolfman panel is riddled with bullet holes. This is just one example of the destruction of important artifacts in the Bears Ears region.

There are very few places left in the U.S. where so many well-preserved cultural sites are found in the solitude of a beautiful backcountry setting. Yet these resources are unprotected, and they are increasingly in danger from human damage. The Bureau of Land Management (BLM), which oversees Bears Ears, has only one law enforcement officer assigned to patrol the 1.9 million acres. Looting, grave robbing, vandalism, and other serious damage to cultural resources are on the rise, in addition to impacts from oil exploration and illegal off-road vehicle use.

President Theodore Roosevelt signed the Antiquities Act into law in 1906 in part to try to end problem of “pot hunting,” the digging up of ancient artifacts, which was causing irreversible damage to archaeological sites. By declaring Bears Ears a national monument, President Obama could likewise use the Antiquities Act to curtail destruction of special and sacred places. 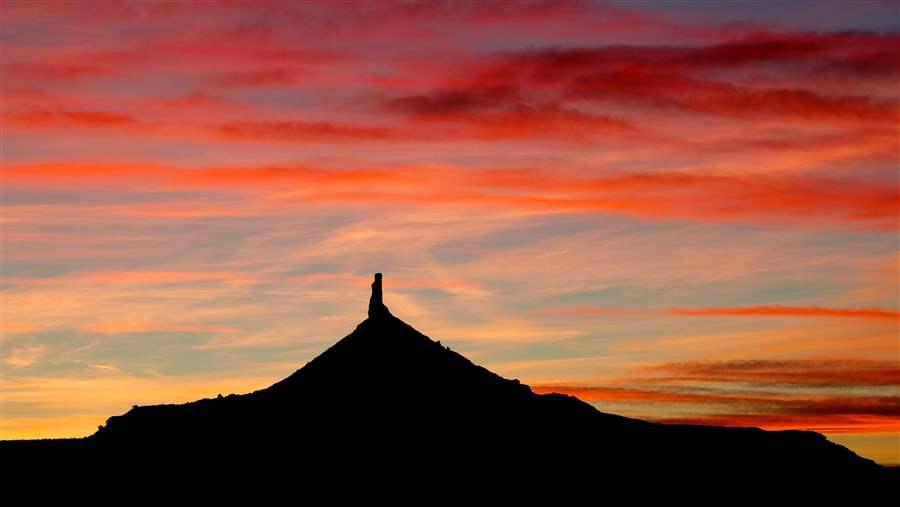 In Utah, the question is not whether to protect these lands, but how to do so. A clear majority of Utahans support protecting Bears Ears as a new national monument. Even members of Utah’s congressional delegation who have opposed monument designation introduced a bill that would preserve some of these same areas. The bill recognizes the importance of safeguarding this special place.

Economic and other benefits 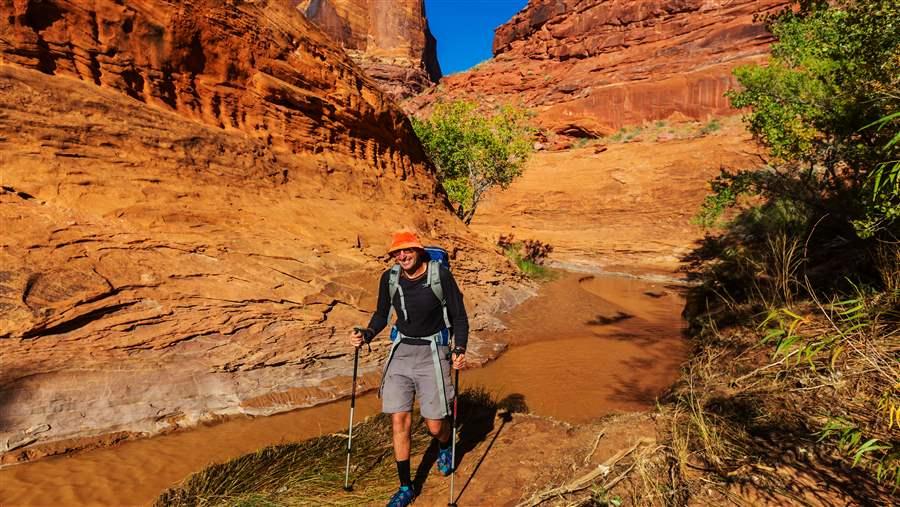 A hiker enjoys the beauty of Coyote Gulch in the Grand Staircase-Escalante National Monument.

In the 10 years after Grand Staircase-Escalante National Monument was established in Utah in 1996, the number of jobs in the two counties surrounding the monument increased by 38 percent and per-capita income rose 30 percent, according to a 2011 study by Headwaters Economics. And a recent poll shows that Utahans—by a margin of more than 2 to 1—believe the monument designation has been good for their state, with significant majorities saying it has had a beneficial impact on the state’s tourism industry and on its wildlife and environment.