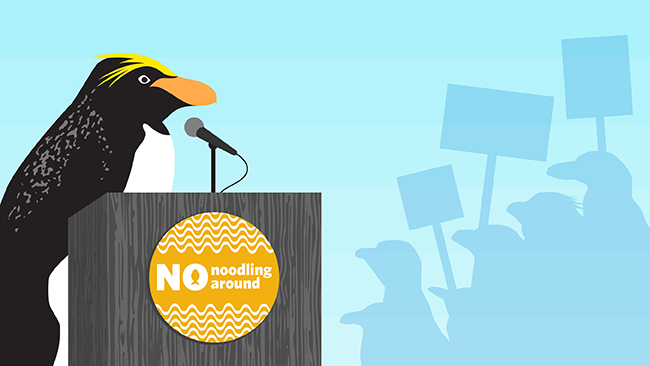 September is a time for back to school, the start of fall weather—and international environmental conferences. Major world leaders gathered throughout the month to focus on protecting our lands and oceans.

One area that needs significant attention is the Southern Ocean around Antarctica.

To help draw attention to and generate support for conservation of this important area, six species of penguin, all of which live, feed, and breed in and around Antarctic and sub-Antarctic waters, have agreed to participate in a contest to determine the world’s favorite Southern Ocean penguin species—with you as the decider!

The polls are now open, so cast your ballot before Sept. 30!

Campaign slogan: No Noodling Around

Platform promise: “I will do my best to appropriately manage the impact of humans and invasive species in our foraging and nesting areas.”

Signature trait: bright yellow and orange crest feathers on top of the head

Although the number of macaroni penguins is large, the species is in decline globally. Access to its main food supply could be in jeopardy because of climate change and expanded industrial fishing for krill in penguin foraging habitat. Having plenty of krill is essential for these penguins because they eat a lot. According to some sources, macaroni penguins collectively consume 4 million tons of krill a year.

Additionally, introduced species such as cats, rabbits, and rats could substantially impede penguin breeding. These nonnative predators have caused problems for other types of nesting seabirds and could pose a significant threat to the success of macaroni breeding on some sub-Antarctic islands.

Increased tourism could put additional pressure on macaroni penguins through colony disturbance. This is important because these penguins don’t like their colonies bothered. They’re very protective of their mates and chicks—especially because only one of the two eggs the mother lays survives.

Why the macaroni deserves your vote:  In the past 36 years, the global macaroni population has declined considerably, from 9 million to 6.3 million pairs. Macaroni penguins depend on ocean resources that are at risk because of ocean warming and fishing. In fact, this species is now listed by the International Union for Conservation of Nature as vulnerable to extinction. Establishing protections could make a big difference in their long-term survival.

By winning the vote as humankind’s favorite penguin, the macaroni would continue to remind the world of what is at stake in Antarctica, how human activity is harming this special environment, and why the Commission for Conservation of Antarctic Marine Living Resources and the world must act now to protect the Southern Ocean.