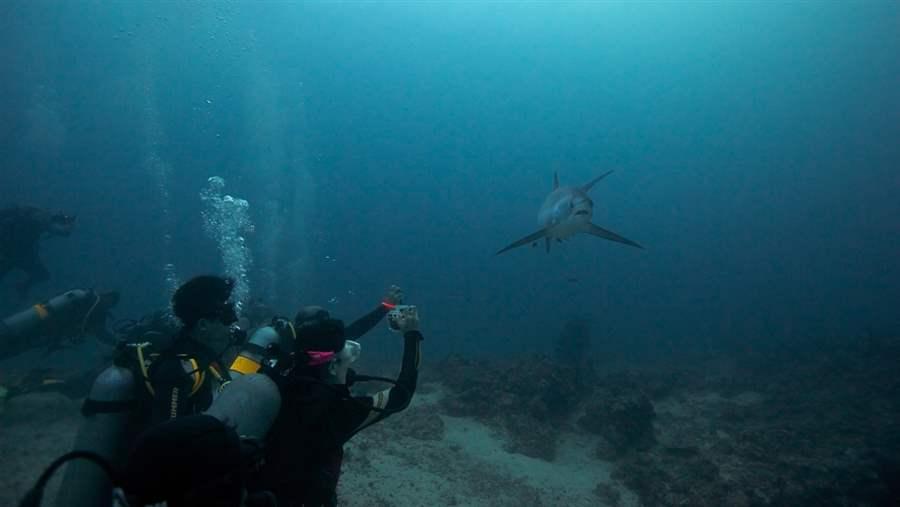 Preservation of these species is critical, not only to keep the world’s oceans healthy but also to protect the livelihoods of people who live where they are often found.

After Typhoon Haiyan brought destruction to Malapascua Island in the Philippines in 2013, the opportunity for divers to glimpse thresher sharks in the surrounding waters allowed the island to prosper again. Divers from all over the world came just to see the sharks. Today, Malapascua is the only place where threshers can be seen almost every day.

But these shark populations have been severely depleted, dropping more than 70 percent worldwide. This week,  at the 17th meeting of the Conference of the Parties (CoP17) to the Convention on International Trade in Endangered Species of Wild Fauna and Flora (CITES) in Johannesburg, member governments will consider restrictions on the international trade of three species of thresher sharks, silky sharks, and nine species of mobula rays. They will vote on proposals to add these species to CITES Appendix II, which would allow trade to continue only if proved sustainable. CITES is recognized globally as one of the most effective and best-enforced international conservation agreements.

Preservation of these species is critical, not only to keep the world’s oceans healthy but also to protect the livelihoods of people who live where they are often found.  Despite the demand for shark products—such as fins, meat, and liver oil—that has driven declines worldwide, the species are more valuable alive than dead, especially for islands dependent on tourism.

On Malapascua Island, the relevance of the whip-tailed thresher sharks is palpable in street art, wood carvings sold to tourists, and dive shop logos. To help protect the species, the government has deputized fish wardens to patrol the waters where the sharks are found.

The government of the Maldives, a sponsor of the shark proposals before CITES, invited several Malapascua residents to CoP17 to share their stories about how thresher sharks helped them recover after the typhoon. Some have already done so in a video prepared by The Pew Charitable Trusts.

“The thresher shark is for everyone who lives in the Philippines,’’ said Oscar Conje, a fish warden from Malapascua. “It’s important that the sharks don’t disappear.”

Project Sharklink, a local group dedicated to the sustainable development of the island, has organized a patrol group to monitor the nearby seamount, Monad Shoal, which routinely attracts both threshers and divers during the tourist season.

“It’s a constant threat when there are commercial fishing boats nearby. We patrol Monad Shoal 24/7 just to shoo the illegal fisherman,” said Dennis Bait-it, executive director of Project Sharklink.

Renato Reuyan, a local dive guide, learned about the importance of shark conservation after moving to Malapascua.  When he was a fisherman, Reuyan would catch five to 10 sharks a day.

“It was here in Monad Shoal that I realized it’s very important to protect the ocean. If there’s no more sharks, then I don’t have any income. In that case, my family would go hungry,’’ Reuyan said. “When there’s a lot of sharks, there’s a lot of divers, and that means more income.”

A CITES Appendix II listing would ensure that thresher sharks are traded responsibly and not fished to extinction.