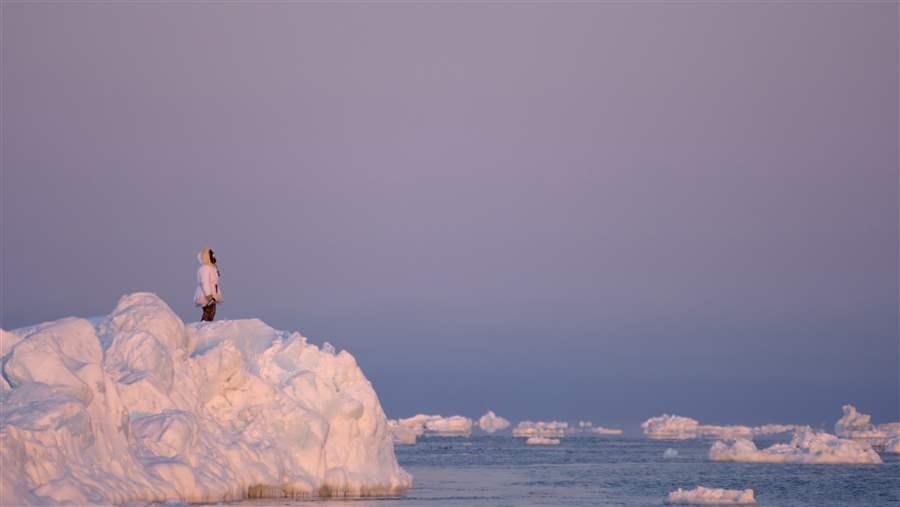 A subsistence hunter observes the seascape at Point Barrow near Barrow Canyon.

This week’s gathering of science ministers from around the world for the White House Arctic Science Ministerial is drawing well-deserved attention to the need for reliable, actionable information about the Arctic region. Many kinds of research and monitoring can contribute to such an effort, and traditional knowledge, built up over lifetimes and generations of experience, is routinely listed as critical for understanding and managing the Arctic environment. In recognition of the importance of traditional knowledge, the administration is holding a dedicated meeting with Arctic indigenous leaders Sept. 27, the day before the ministerial.

Acknowledging that something is a priority and taking action on it, however, are different things. Despite the many words that science and policy leaders have written and spoken about the value of traditional knowledge, efforts to include indigenous people in decision-making have been limited. Although, workshops and other activities—such as a paper two colleagues and I recently published on sea ice and marine mammals that was based on interviews with hunters in 11 Alaskan villages—have improved documentation of traditional knowledge and helped connect its holders with scientists and managers.

Such efforts require investment. No shortcut can replace the time, effort, and expertise required to carry out successful projects involving traditional knowledge; no missing key will unlock that storehouse of information in one quick and easy step. Going beyond workshops and conferences to invest in the recording of knowledge and observations is essential.

And documenting traditional knowledge is just the first step. Using it effectively alongside other sources of information, such as standard scientific studies, requires skill and experience: The challenge is similar to that of combining oceanographic, biological, economic, and anthropological studies to understand environmental and social impacts. Different forms of knowledge are collected in myriad ways from diverse sources, requiring practitioners to learn the terms and perspectives of other disciplines to create a cohesive whole. In such an effort, involving experts from each field only makes sense, but traditional knowledge-holders are often left out.

As a result, traditional knowledge is too often treated as an afterthought or an aside within in-depth examinations of “scientific” findings. More work is needed to bring traditional knowledge-holders into analyses and to do so consistently so that they and their colleagues from other fields can learn to communicate effectively. Again, there are no shortcuts, but we can draw upon successful examples, such as the Alaska Beluga Whale Committee’s development of a collaborative research and management forum in which hunters, scientists, and managers combine their expertise to yield insights and take actions that are beyond the ability of any one group.

Analysis is an intermediate step on the way to making decisions. Many indigenous leaders have called for greater attention to traditional knowledge, but chiefly as a means rather than an end. Having one’s expertise acknowledged and incorporated into a decision-making process is important, but not sufficient to providing full confidence in the resulting decisions. Rather, knowing—and ideally having a role in shaping—how one’s knowledge is being used is critical to cultivating that trust. One way this principle has been put into practice is through co-management, involving affected groups in decision-making.

Traditional knowledge and local concerns are not the only factors in decisions about the Arctic, but neither are they negligible or optional considerations. More action is needed to create a greater role for indigenous and other local leaders to share in the decision-making responsibility. Doing so will go a long way toward fulfilling the promise of traditional knowledge to contribute to a healthy, sustainable Arctic.

The attention given to the topic before and during the Arctic Science Ministerial is welcome. Even more so will be tangible steps to put that attention into long-term action.