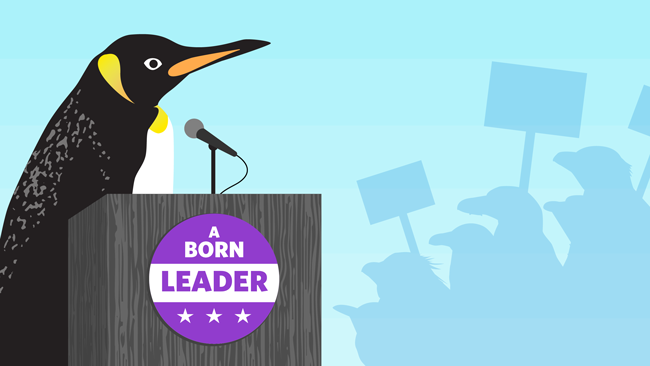 King penguins have rebounded to strong populations—and increased protections can ensure that this trend continues.

The world’s largest protected area was recently created in Hawaii, protecting 582,578 square miles (1.5 million square kilometers) of ocean. This historic action is a signal for other world leaders to follow suit and protect our oceans and marine life. One area that could benefit from protections is the Southern Ocean—and its numerous penguin species.

To help draw attention and support to their home, six species of penguin, all of which live, feed, and breed in and around Antarctic and sub-Antarctic waters, have agreed to participate in a contest to determine the world’s favorite Southern Ocean penguin species—with you as the decider!

Through Sept. 30, you’ll have a chance to meet each candidate so that you can make an informed choice. Each of these hopefuls is running on a powerful platform to earn your vote and to help these waters continue to support thriving ecosystems.

Who is running, and what are their positions on the issues? We’ll be answering those questions and more as we profile each candidate. The winner will be announced on Oct. 13.

Platform promise: “When I’m elected, I will make sure that all 24 CCAMLR member countries, plus the European Union put aside their differences, and finally implement a network of marine reserves to protect not just Antarctica, but also the Southern Ocean as a place of peace and science.”

Penguin profile: King penguins are the second-largest species of penguin, after emperors. They can be found primarily on the Falkland/Malvinas and South Georgia islands in the South Atlantic Ocean. If the king penguin looks similar to the emperor, that’s because they’re cousins.

One of the biggest differences between king penguins and their emperor cousins is habitat location. Despite the similarities between the two species, king penguins are not found in Antarctica. They reside only on sub-Antarctic islands, although they are widely distributed throughout their range.

In the past century, king penguins were particularly vulnerable to human interference, often being killed by seal hunters. But these birds have made a major comeback and now boast healthy populations. About 1.6 million breeding pairs of king penguins inhabit sub-Antarctic islands in the South Atlantic, the southern Indian, and southwestern Pacific oceans. Because of their sizable range and increasing populations, these birds are not considered vulnerable to extinction. However, protections are still warranted to keep king penguins from facing the depletions already seen in other penguin species.

Today, climate change is the most significant threat facing these penguins. Warming seas affect the proximity of prey to their colonies and can contribute to breeding failure.

Why the king deserves your vote: Although king penguin populations are strong, they depend on many ocean resources that may be at risk because of climate change and overfishing. As the sea temperature and fishing activities increase, the establishment of protections—such as marine reserves—now could make a substantial difference in the species’ long-term survival.

By winning the vote as humankind’s favorite penguin, the king would continue to remind the world of what is at stake in the Southern Ocean, how human activity is harming this special environment, and why CCAMLR and the world must act now to create a network of marine reserves around Antarctica.