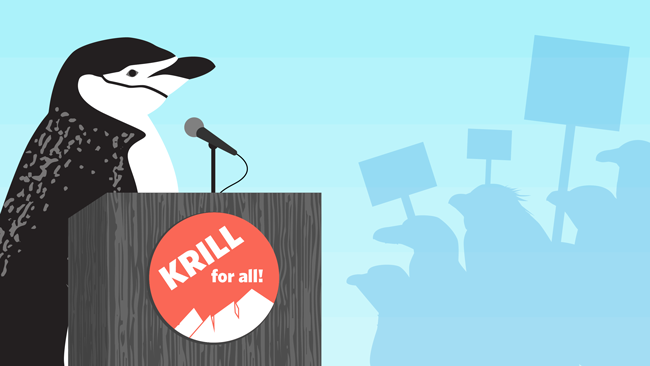 Chinstrap penguins received their name because of the distinctive black markings on their faces.

All eyes were on the Olympics this summer, as countries from across the globe gathered together with a spirit of international cooperation. Now, countries must come together to help protect the Southern Ocean surrounding Antarctica. Global warming and human activities are threatening many of the area’s penguin species—and they need our support more than ever.

To help draw attention and support to their home, six species of penguin, all of which live, feed, and breed in and around Antarctic and sub-Antarctic waters, have agreed to participate in a contest to determine the world’s favorite Southern Ocean penguin species—with you as the decider!

Campaign slogan: Krill for all!

Platform promise: “I will make sure the Commission for the Conservation of Antarctic Marine Living Resources (CCAMLR) stays true to its conservation mandate by enforcing strong krill fishery management measures that avoid overdepletion of krill from coastal areas where we feed and ensuring that krill harvesters share their data and implement 100 percent observer coverage on vessels.”

Signature trait: A black beak and a white face with a distinctive thin black marking along the chin, for which it is named.

Penguin profile: Chinstraps are the second-most abundant penguin species in the Antarctic and sub-Antarctic region. There are about 4 million breeding pairs of chinstrap penguins, with most concentrated in the Antarctic Peninsula and the South Shetland, South Orkney, and South Sandwich islands in the Southern Ocean.

Even though these birds are at little risk of extinction with generally strong populations, natural decreases in the abundance of their prey, increased fishing in their foraging area while nesting, and melting and shifting sea ice could have a detrimental impact on colony stability and health.

In fact, 99 percent of the chinstrap’s diet is Antarctic krill. Unfortunately, humans from the north keep coming to the Southern Ocean to fish for krill for supplements and animal feed. As industrial krill fishing increases, particularly off the Antarctic Peninsula, less food may be available in chinstrap penguin foraging areas, and the birds’ populations could decline.

Antarctic tourism, particularly to the peninsula, is also on the rise. More than 37,000 travelers visited the Southern Ocean in the 2013-14 season. Increased human interference could affect colony health as well.

But chinstraps are strong—in more ways than one. They can shed their stomach linings, which could help cleanse them of fluoride ingested when they feed on krill. Steep, rocky slopes don’t intimidate them. These areas are actually the preferred chinstrap nesting place. The birds can also use all four limbs to climb, jump great distances, and propel themselves on their stomachs like a toboggan.

Why the chinstrap deserves your vote: Successful foraging for krill is key to the survival of chinstrap penguins, as is minimizing potential disturbances from humans. The chinstrap population is healthy today—and it needs to stay that way. Implementing protections proactively, before the chinstrap is at risk, can help ensure that their numbers remain robust.

By winning the vote as humankind’s favorite penguin, the chinstrap would continue to remind the world of what is at stake in Antarctica, how human activity is harming this special environment, and why CCAMLR and the world must act now to protect the Southern Ocean.