UPDATE: The Pew Charitable Trusts filed a letter with the Consumer Financial Protection Bureau on Oct. 7, 2016, providing comments on the bureau’s proposed small-dollar loan rule and recommending several ways it should be improved. Those recommendations have been widely supported by banks and credit unions, researchers, consumer advocates, borrowers, and the public and have been endorsed by editorial boards at The New York Times, Bloomberg View, and The Washington Post, among others.

Proposed regulations from the Consumer Financial Protection Bureau (CFPB) would protect consumers from conventional, lump-sum payday loans, which Pew’s research has shown usually have unaffordable payments that trigger reborrowing. The pending rule strongly encourages payday and auto title lenders to give borrowers more time to repay loans in smaller installments, rather than large lump-sum payments. Yet even as the proposal would accelerate the shift toward installment lending that is already under way in this market, it fails to provide standards for affordable payments or reasonable loan lengths that are sufficiently clear to ensure the safety of this credit for consumers.

The rule would require lenders to follow a specific process for evaluating a borrower’s financial condition, but it would probably leave consumers vulnerable to harmful terms and discourage banks and credit unions from entering this market and offering lower-cost alternatives. Because the draft rule focuses on the process of issuing a loan rather than on establishing product safety standards, payday installment loans with annual percentage rates (APRs) of 400 percent will probably remain common in the marketplace, but lower-cost offerings from mainstream lenders are unlikely to become widely available.

Click here for Pew’s summary of the proposed rule.

High-cost installment loans will be common under the proposal

In June, the CFPB released a proposed rule to regulate payday, vehicle title, and certain high-cost installment loans. As described in Pew’s summary of the bureau’s proposal, for all covered loans the lender is required to use a specific process for assessing the borrower’s ability to repay (ATR) or may choose its own method for assessing the borrower’s ATR in exchange for meeting certain standards, known as conditional exemptions.

The proposal places limits on conventional payday loans, which are due in full after two weeks, that will make these products far less prevalent and, instead, strongly encourages lenders to issue multipayment loans with terms longer than 45 days. Giving consumers more time to repay in installments is a positive step, but dangerous loans with APRs of 400 percent and higher are likely to be commonplace under this proposal.

Most loans issued under the proposed rule would probably be this type of harmful high-cost installment credit, offered mainly by payday and auto title lenders following the “longer-term ability-to-repay” section of the rule (Section 3 in the table), with typical APRs of 300 percent or higher. Most borrowers are likely to pass the ability-to-repay (also called full payment) test for loans lasting more than 45 days, especially because lenders are permitted to estimate, rather than verify, applicants’ living expenses. The longer-term ATR section includes no limits on loan or payment size, cost, duration, rate of default, or how long a lender may keep access to a borrower’s checking account or car title.

Research suggests that some borrowers would struggle to afford the payments on the longer-term ATR loans. Industry analysts have estimated that 60 to 80 percent of current payday loan borrowers would qualify for a payment of at least $200 a month, even though average borrowers report being able to afford only $100. When borrowers qualify only for payments of less than even $100, lenders would still be able to issue them high-cost loans by substantially stretching the repayment period. For example, payments on a $500 loan could last 18 months and accrue $1,126 in fees.

Vendors are already developing or marketing products to help payday lenders comply with the CFPB’s proposed ability-to-repay rule and enable widespread high-cost installment lending from payday and auto title lenders that are willing to dedicate staff time and take on regulatory risk in exchange for the right to charge rates that far exceed those of mainstream creditors.

Among the options in the proposal, the longer-term ability-to-repay section (See Table 1, Section 3.) would almost certainly be the one most commonly used by payday and auto title lenders, and those loans would be by far the most expensive made under the proposed rule. 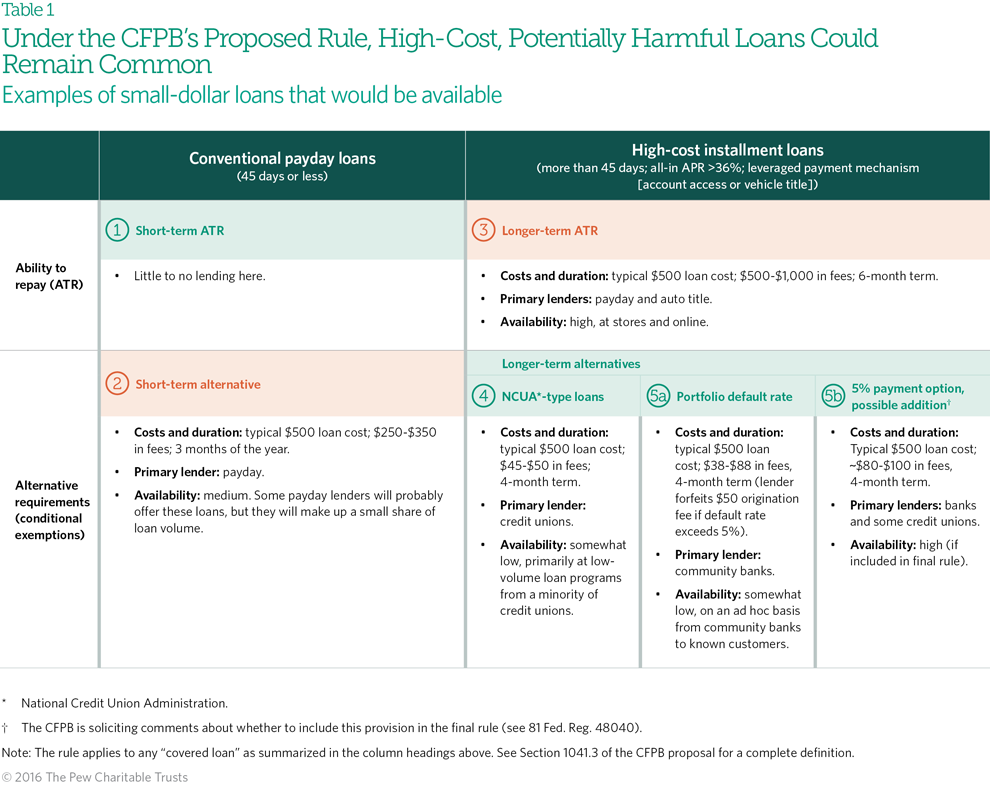 Ensuring that small-dollar loan payments are affordable is essential to protecting consumers, and lenders and regulators can determine appropriate payments in a variety of ways. All lenders underwrite loans to manage risk, but unlike mainstream creditors, payday and auto title lenders have access to borrowers’ checking accounts and car titles to improve their ability to collect on loans. This extraordinary power over financially fragile consumers makes these high-cost loans inherently dangerous. Pew’s research has shown that it can lead to the inability to cover basic living expenses without borrowing again and to significant additional costs, such as repeated overdrafts, lost vehicles, and closed checking accounts. As a result, clear safeguards are necessary to protect consumers: An underwriting-only approach to regulation, such as the CFPB has proposed, is insufficient.

The primary shortcoming of the proposed ability-to-repay test is that it lets aggressive lenders set large payments and excessive durations even as they maintain long-term access to vulnerable borrowers’ checking accounts or vehicle titles. The longer-term ability-to-repay provision (Section 3 in the table) places no limits on loan principal, payment size, cost, term, or origination or other fees and sets no standards for acceptable default rates or for how long lenders may access borrowers’ accounts or vehicle titles. Without such safeguards, the regulation will neither sufficiently curb harmful loans nor promote competition from lower-cost, mainstream lenders.

Under the proposed regulation’s alternative requirements, or conditional exemptions, lenders would be able to use their own methods for assessing borrowers’ ability to repay in exchange for following rules about loan structure, cost, or frequency of usage that are intended to limit potential harms to consumers. These more specific consumer protection standards mean that, in general, loans issued according to these sections will pose less risk to consumers than the longer-term ability-to-repay loans that will probably be widely available. Each conditional exemption takes a different approach to protecting consumers, and the portfolio default rate option and the short-term alternative both entail some risk of consumer harm:

In addition, the volume of lending under the portfolio default rate option is likely to be low, with some ad hoc lending from community banks to known customers.

The 5 percent payment option’s clear standards would protect consumers and enable mainstream lenders to use automated underwriting and origination techniques that reduce costs. Because every payday loan borrower is required to have a checking account and verifiable income, banks and credit unions are well positioned to take a large portion of the market from high-cost lenders, saving millions of consumers billions of dollars annually.

However, without the 5 percent option, these providers will generally be unable to offer consumer-friendly small loans at scale, leaving the market dominated by high-cost payday and auto title lenders. Payday lenders have expressed a willingness to conduct extensive paperwork and take on legal risk associated with ambiguous regulatory rules, as long as they can charge customers 300 percent APR or more. But banks generally would not be willing or able to do so. Better, lower-cost small loans will only emerge with clear, strong regulatory guidelines; for example:

Once finalized, the CFPB’s rule will help hasten the shift away from unaffordable lump-sum loans and toward installment lending that is already under way in the payday and auto title loan markets. As constructed, the primary benefit the proposal would offer borrowers is more time to repay high-cost, risky loans, but it would not provide them with adequate protections against excessive durations, unaffordable payments, and prices that are far higher than needed to make credit profitably available.

Pew recommends that the CFPB take firmer steps to prevent covered loans from becoming dangerous or abusive, particularly by limiting how long lenders can retain access to a borrower’s checking account and subjecting lenders with high default rates to greater levels of scrutiny. And the final rule must set clear product safety standards, including the 5 percent payment option to protect consumers from the harms associated with high-cost payday and auto title installment loans and enable banks and credit unions to provide safer, lower-cost small-dollar credit.

The CFPB is accepting comments on the rule until Oct. 7.

Federal and state policymakers can take action in three ways

June 2 marked the one-year anniversary of the release of the Consumer Financial Protection Bureau&rsquo;s official Notice of Proposed Rulemaking for Payday, Auto Title, and Certain High-Cost Installment Loans. The CFPB received more than 1 million comments on the proposal. Pew&rsquo;s research indicates that federal regulation is important, but the proposal misses the mark by allowing 400 percent interest rate loans to flourish while locking out lower-cost loans. In addition, two 2017 surveys from The Pew Charitable Trusts found that borrowers and the broader public consider prices for high-cost loans to be unfair, and 81 percent of borrowers would rather obtain loans through their banks and credit unions than from payday loan stores, which operate in 35 states today. (See figure below.) However, the CFPB has struggled to create a strong universal rule that covers all small loans, and in the absence of federal regulation, lenders are expanding their portfolios of high-cost products with unaffordable payments. Therefore, action by federal bank regulators and state lawmakers has become more urgent.