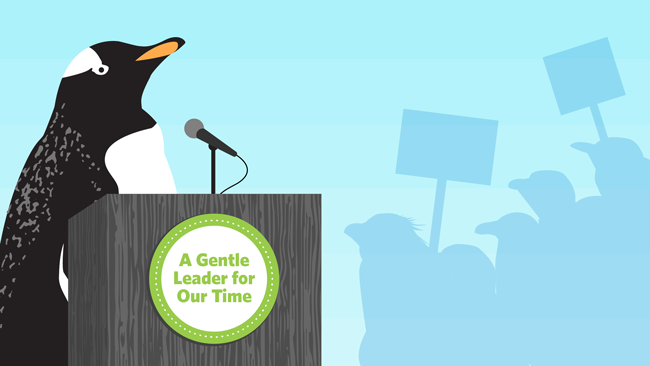 The gentoo is the world’s fastest-swimming penguin, but growth of some populations is slowing down because of human interference.

Massive heatwaves are scorching parts of the U.S. this summer, but the sizzling temperatures aren’t only hitting North America. In July, two Middle East locations hit 129 degrees, the hottest temperature ever recorded in the Eastern Hemisphere.

As places around the globe continue to experience alarming warmth, ocean temperatures are also rising, including in the Southern Ocean around Antarctica. As a result, the penguins that call those waters home are feeling the heat, and many are struggling to survive.

To help draw attention to and generate support for conservation of this important area, six species of penguin, all of which live, feed, and breed in and around Antarctic and sub-Antarctic waters, have agreed to participate in a contest to determine the world’s favorite Southern Ocean penguin species—with you as the decider!

Campaign slogan: A Gentle Leader for Our Time

Platform promise: “I will establish a gentoo tourist ambassador program. It’s vital that tourism be managed appropriately so that gentoo homes are free from damaging effects. I will also ask the Commission for the Conservation of Antarctic Marine Living Resources (CCAMLR) to designate new marine reserves around the Antarctic Peninsula and Weddell Sea.”

Signature trait: Bright red-orange bills and colorful feet, which range from pink to orange to red.

Don’t let their awkward wobble on land fool you. Gentoo are the fastest penguin species in the water. They can swim up to 22 miles per hour and dive up to 600 feet.

This charismatic bird is also loyal. Gentoos are mostly monogamous during their breeding season. Some partners form a long-lasting bond and even return to the same nest sites year after year. And they’re crafty, constructing their nests out of small pebbles—sometimes even stealing from their neighbors’ nests to get the job done. They are the most adaptable penguins because as snow and ice melt due to climate change, they are able to colonize the newly available breeding habitat.

However, their nests and breeding grounds can be threatened by human interference. Tourism and other commercial activities near the islands—such as oil exploration, fishing, and egg collection—negatively affect their ability to breed and forage. Although some gentoo colonies appear to be growing, several sub-Antarctic populations are declining quickly.

Why the gentoo deserves your vote: Every year, more and more people visit Antarctica, making tourism and habitat degradation the main threats to the health of gentoo penguin populations. This once-thriving species is now listed as near threatened with extinction according to the International Union for Conservation of Nature and Natural Resources.

This is why it’s critical that marine reserves be created to protect gentoo feeding habitat—and for tourism to be managed appropriately to prevent damage to their foraging and nesting areas.

By winning the vote as humankind’s favorite penguin, the gentoo would continue to remind the world of what is at stake in Antarctica, how human activity is harming this special environment, and why CCAMLR and the world must act now to protect the Southern Ocean.