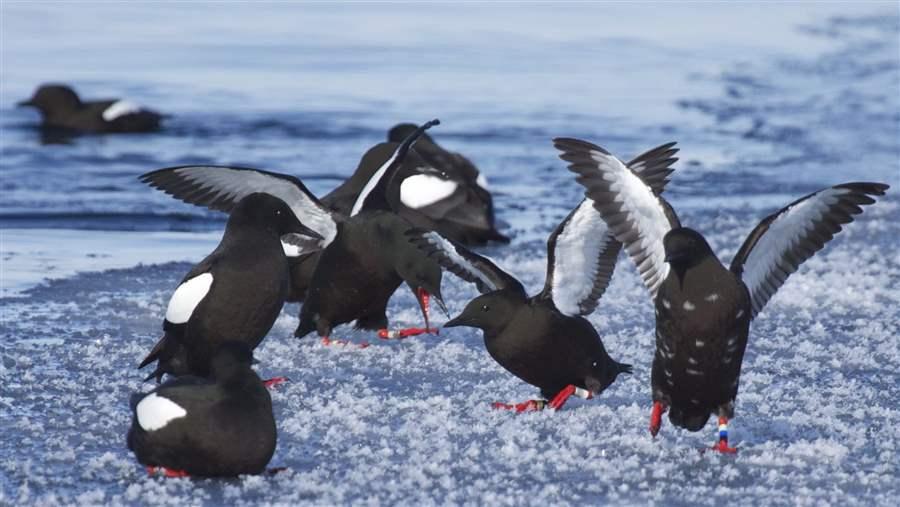 Black guillemots are a vital part of the marine ecosystem in Smith Bay.

When I think of Smith Bay, seashells and guillemots come to mind: seashells, because I once found a remarkable collection of beautiful shells on the shore there. And guillemots, because of the work of scientist George Divoky to understand the habits of these seabirds and what they tell us about the waters where they feed and the Arctic marine ecosystem of which they are such a visible part.

On first glance, Smith Bay, along Alaska’s northern coast, looks to be a body of water like any other: water stretching away from shore, wrinkled with waves and reflections of sky. As creatures of the open air, we humans are often unaware of how much is going on beneath the surface of the sea.

In the summer of 1990, on a trip along the Beaufort Sea coast in a small boat, I was too preoccupied by the demands of navigation and seamanship—keeping us on course, out of dense ice, and oriented safely to big waves—to think too much about what the world of the seabirds and seals looked like when they dove into the deep. But when we pulled ashore at Smith Bay for a rest on an otherwise unremarkable mud and gravel beach, there, much to my surprise, were seashells in great variety and abundance.

Clearly, a lot was going on in the nearby waters. We spent a while gathering a small collection of the shells for a photo or two and then continued on to Barrow. More than a quarter-century later, the memory is still vivid. Nowhere else along the coast did we find so many shells. Although Smith Bay may look like any other stretch of water, its ecology is clearly unique.

The black guillemots of Cooper Island, at the western edge of the Smith Bay area, also demonstrate how productive and diverse those waters are. These small seabirds come to the island each year to nest, lay their eggs, and raise their chicks, feeding offshore on small fish in the water column and invertebrates on the seafloor. Their abundance is a powerful indicator of the health of the ecosystem.

Divoky has spent more than 40 summers on Cooper Island, watching the birds mate and breed, weighing them, monitoring their food intake and their ability to feed their young, and studying how their welfare depends on snow, sea ice, and other features of their Arctic habitat. The result is an extraordinary set of data with few parallels anywhere.

The black guillemots come to Cooper Island because it provides good nesting habitat, sheltered from land-based predators, so long as no polar bears or arctic foxes remain on the island after the sea ice breaks up, and because it gives them access to the rich waters of Smith Bay. In brief, they come because they find food and a home.

And though the Arctic has always been variable—when it comes to breeding success, the record shows good and bad years—lately, the story has become more complex. In 2009, only one chick survived to fledge and leave the island. One cause of the decline has been a shift in the food web, with fewer of the rich, fatty Arctic cod that provide calories and nutrients for young guillemots. Instead, the adults feed on sculpin, which offer less of what the chicks need. And polar bears have become more likely to get stranded on the island, where they feed on eggs and nestlings. Puffins, too, have expanded their range northward to Cooper Island, and they also prey on the newly hatched birds. All in all, these changes are a big challenge for the guillemot colony.

Where there are losers, however, there are also often winners. As the guillemots have suffered, bowhead whales and Dolly Varden char, a fish in the salmon-trout family, have thrived. Smith Bay remains an important feeding area for the whales during summer and fall, a sign of its enduring ecological importance. And the guillemots continue to arrive each spring, ready again to lay eggs and raise chicks.

Based on its remarkable ecology, Smith Bay was one of the marine areas identified as especially important in a recent synthesis of data from the Chukchi and Beaufort seas. I hope the area will earn the protections it needs to give guillemots their best chance at survival and to continue to surprise and delight visitors for a long time to come.

Marine life is abundant throughout the Arctic Ocean&rsquo;s Beaufort and Chukchi seas. But a recent synthesis of the best available science supports the idea that certain areas&mdash;often those with distinct physical or oceanographic features&mdash;make exceptional contributions to ecosystem function and indigenous peoples&rsquo; way of life.