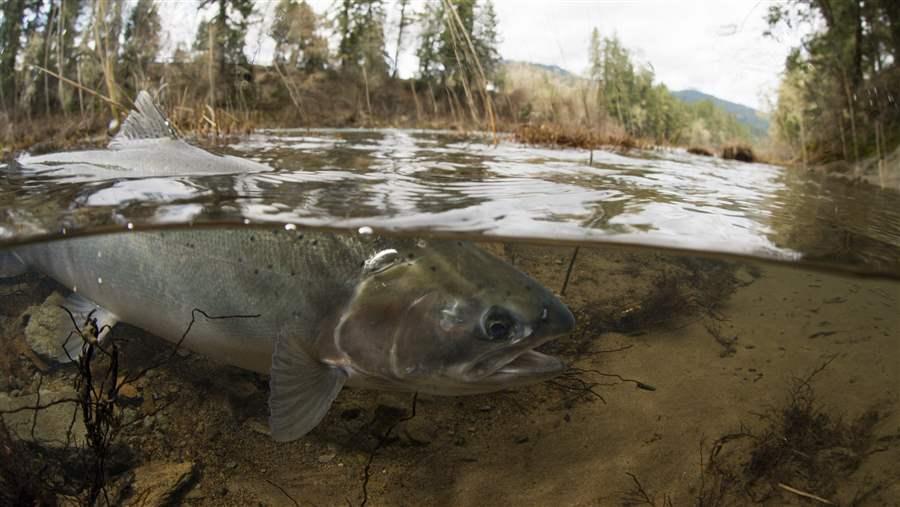 A Steelhead Trout seen in the North Umpqua River in Oregon.

The breadth and diversity of those who seek to protect our nation’s public lands was on full display last month as local elected officials, business owners, representatives of faith-based and Latino organizations, veterans, Native Americans, and other advocates came to the nation’s capital to speak with their elected leaders on behalf of cherished public lands and rivers back home.

The visit was part of a push to achieve wilderness and national monument designations before the end of the year. Pew staff and our partner groups provided training sessions on advocacy strategies targeting specific conservation proposals.

While visiting congressional offices, participants could visit a Pew-sponsored photo exhibit in the Russell Senate Office Building rotunda that featured stunning photos of our series “16 in ’16” wild places to protect. A day and a half of Hill and Executive Branch meetings was followed by a reception attended by several members of Congress and many congressional and administration staff.

Our work in the nation’s Capital would not be successful without support and active participation from conservation advocates like those who took time out of their busy lives to travel to Washington to share with their elected officials the importance of protecting our public lands for future generations.

On July 12, the Senate voted to send S. 2012, the North American Energy Security and Infrastructure Act, which includes language from Senator Martin Heinrich (D-NM) to protect the Cerros del Norte as wilderness, to a conference committee.

The vote followed similar approval by the House in late May of their comprehensive energy package. Conferees will attempt to reconcile the two versions of this bill. The Cerros provision would safeguard 21,500 acres of wilderness within the Río Grande del Norte National Monument.

On June 28, Nevada Senators Dean Heller (R) and Harry Reid (D) introduced S. 3102, the Pershing County Economic Development and Conservation Act, which would provide wilderness protection for 136,000 acres in the northeastern part of their state while resolving some land management issues surrounding the ownership of Pershing County’s checkerboard pattern of federal and nonfederal lands.

On July 13, The Senate Energy and Natural Resources Committee unanimously passed S. 1448, Frank Moore Wild Steelhead Special Management Area Designation Act, introduced by Oregon Democrats Ron Wyden (D) and Jeff Merkley (D).  The measure would protect approximately 104,000 acres of some of the best wild steelhead spawning areas in the Pacific Northwest. The land is highly valued for its fishing and wildlife, as well as hiking and backcountry recreation. The legislation’s name honors Frank Moore, a legendary steward of the North Umpqua River and an American war veteran. In 1966, he and a core group of anglers started the Steamboaters, a local organization that seeks to preserve the Umpqua’s natural resources.

On July 14, while Interior Secretary Sally Jewell was in southeastern Utah visiting public lands in spectacular red rock country, the chairman of the House Natural Resources Committee, Rob Bishop (R-UT), and Representative Jason Chaffetz (R-UT), introduced H.R. 5780, the Utah Public Lands Initiative Act. Although in need of improvement, the bill combines permanent wilderness designation to effectively protect some of the most valuable public lands in Utah. The bill would conserve more than 2 million acres of wilderness and 358 miles of wild and scenic rivers with an exchange of land to a state trust for the benefit of the state’s schoolchildren.

However, time remaining in this session of Congress is short, so improving the bill enough for the Senate to pass it will be a significant challenge.

Pew remains committed to working on the legislation in hopes of achieving that outcome. However, our continued support for the legislative path depends on moving a measure forward that can be approved by this Congress before the recess at the end of September. If such progress cannot be shown, Pew believes that President Barack Obama should use his authority, granted by Congress under the Antiquities Act, to protect the Bears Ears area—a place under imminent threat—as a national monument in October.

Support for protecting these Utah lands is strong, as evidenced by the more than 1,000 community members, including Native Americans, sportsmen, archeologists, and others who attended a July 16 public meeting hosted by Secretary Jewell to discuss both the monument proposal and public lands initiative.

It is clear that the time has come to safeguard these special Utah treasures.  The question is what is the best way to ensure that they remain as they are for future generations.