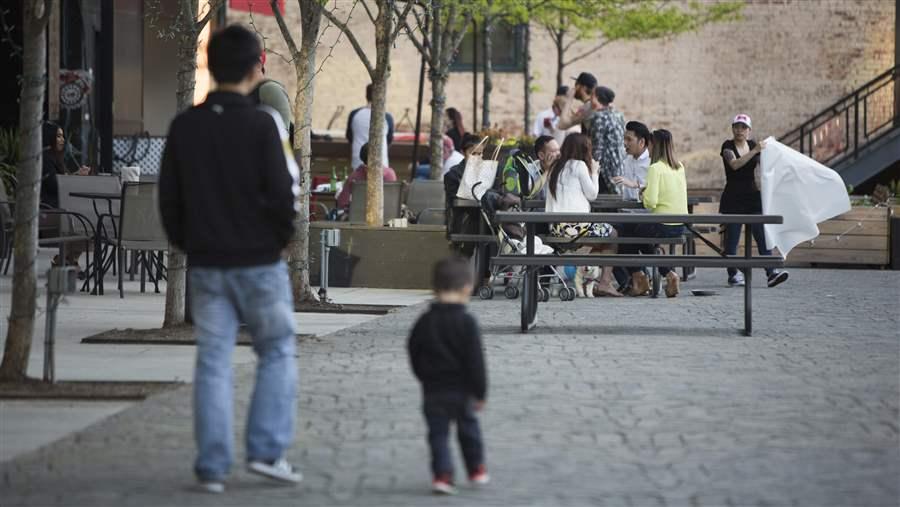 The city of Philadelphia’s population is constantly evolving. Each year, new residents move in while others move out, and the patterns of change help set the contours of the city’s future.

At The Pew Charitable Trusts, we have been monitoring these migration trends, using data from the U.S. Census Bureau and the Internal Revenue Service to produce our most recent report, A Portrait of Philadelphia Migration. These numbers primarily capture domestic comings and goings and reveal that Philadelphia, despite growing modestly for nearly a decade, experiences relatively little turnover when compared with other big cities. For instance, newcomers in 2013 amounted to less than 3 percent of Philadelphia’s overall population; that figure was 9 percent for Denver, almost 6 percent for Washington, and about 5 percent for Baltimore.

Our analysis found that Philadelphia’s new arrivals have been gravitating toward the core of the city in recent years, with the largest share, 23 percent, moving into Center City and its surrounding neighborhoods—an area that accounts for only 9 percent of Philadelphia’s overall population.

The newcomers also are younger and better-educated than the city as a whole. Nearly two-thirds of them are ages 18-34, including many undergraduate and graduate students. And over half of the new arrivals age 25 and older have bachelor’s degrees, nearly double the share for the city as a whole.

While only 36 percent of city residents are non-Hispanic white, half of the in-migrants fit that description. On the other hand, African-Americans, who represent 42 percent of the city’s population, account for just 20 percent of newcomers. The Hispanic share of both new arrivals and the general population is about the same, at around 13 percent; the number of Asian in-migrants is too small to produce reliable data.

What about the people who are leaving? In a number of ways, they look a lot like those coming in: better-educated than the city as a whole, with a higher percentage of whites and a lower share of African-Americans. But those leaving stand out in one key respect: age. The out-migrants outnumber the in-migrants in several age groups, including 0-17 and 35-49, both of which include many school-age children and their parents.

People who move within the city more closely resemble the population of Philadelphia as a whole—in terms of income, educational attainment, age, and household composition—but even here we found some differences. Compared with the city’s overall population, those moving within the city were more likely to be poor, Hispanic, or living with children under 18.

Where Philadelphians come from and move to tells us a lot as well. Close to home, the net outflow to the suburban Pennsylvania counties, particularly Montgomery County, remains relatively strong. But the flow of people to the New Jersey suburbs has diminished from years past.

Among places outside eastern Pennsylvania and southern New Jersey, New York City has long been both the leading source of new Philadelphians and the most common destination for people moving out. In 2013, the last year for which data were available, more people moved to Philadelphia from New York City than in the opposite direction, repeating a pattern seen for most of the past 20 years.

Far more surprising is the second most popular destination for Philadelphians who venture beyond the city and its suburbs: Travis County, Texas, home to that state’s capital city of Austin, a fast-growing, high-tech hub. Travis came in ahead of Los Angeles County and Cook County, Illinois, which includes Chicago.

For everyone who cares about Philadelphia, all of these patterns are worth watching in the years ahead. They will help determine the staying power of the city’s current population growth.

Who is coming to the city—and who is leaving

Philadelphia&rsquo;s recent population growth has policymakers looking at who is moving into the city and who is leaving. Our latest brief, &ldquo;A Portrait of Philadelphia Migration,&rdquo; sheds light on this topic, showing that college graduates and non-Hispanic whites were overrepresented among both new arrivals and those departing the city, compared with their presence in Philadelphia as a whole. It also found that nearly two-thirds of those arriving were ages 18-34 and that the largest share of newcomers had moved into Center City and surrounding neighborhoods.