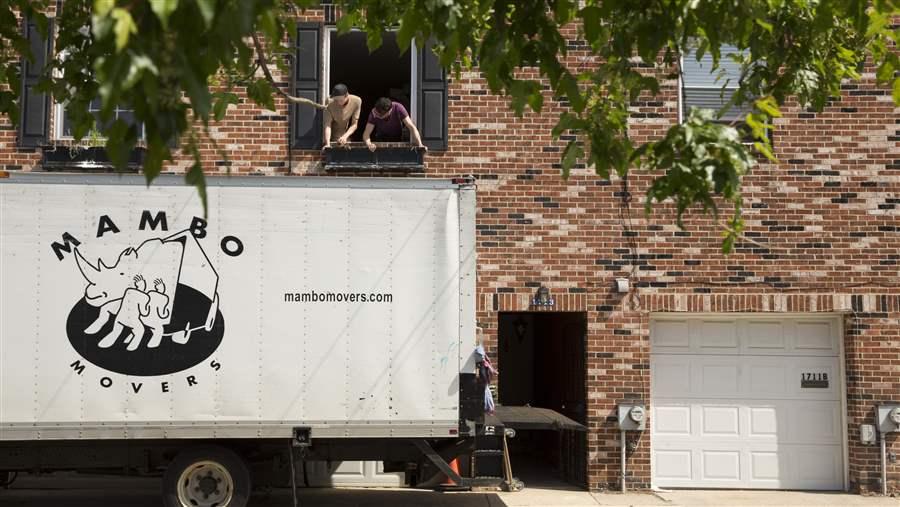 Philadelphia’s recent population growth has policymakers looking at who is moving into the city and who is leaving. Our latest brief, “A Portrait of Philadelphia Migration,” sheds light on this topic, showing that college graduates and non-Hispanic whites were overrepresented among both new arrivals and those departing the city, compared with their presence in Philadelphia as a whole. It also found that nearly two-thirds of those arriving were ages 18-34 and that the largest share of newcomers had moved into Center City and surrounding neighborhoods.

Building on that research, we decided to examine another aspect of migration in Philadelphia: who is moving from one place to another within the city’s boundaries. According to the latest census data, covering 2011-13, an average of 156,900 people moved within Philadelphia each year—far more than the number of those coming into the city or leaving it. The people who made those moves did not look much like the newcomers or departing migrants. Instead, they more closely resembled the population of Philadelphia as a whole in terms of income, educational attainment, age, and household composition. But those moving within the city were more likely to be poorer or living with children under 18 than the city’s overall population, and they stood out from all three groups—the overall population and those arriving and leaving—in terms of ethnicity: Nineteen percent were Hispanic, compared with 13 percent of arrivers, leavers and residents.

In the United States, mobility is often associated with poverty and the instability that comes with it; on the whole, the poorer one is, the more likely one is to move—and the move often is not long distance.1 According to the census data, this held true for Philadelphians moving within the city during the period studied.2 Forty percent of these movers lived in households that made less than $25,000 annually, and one in six were in households with total incomes of less than $10,000. 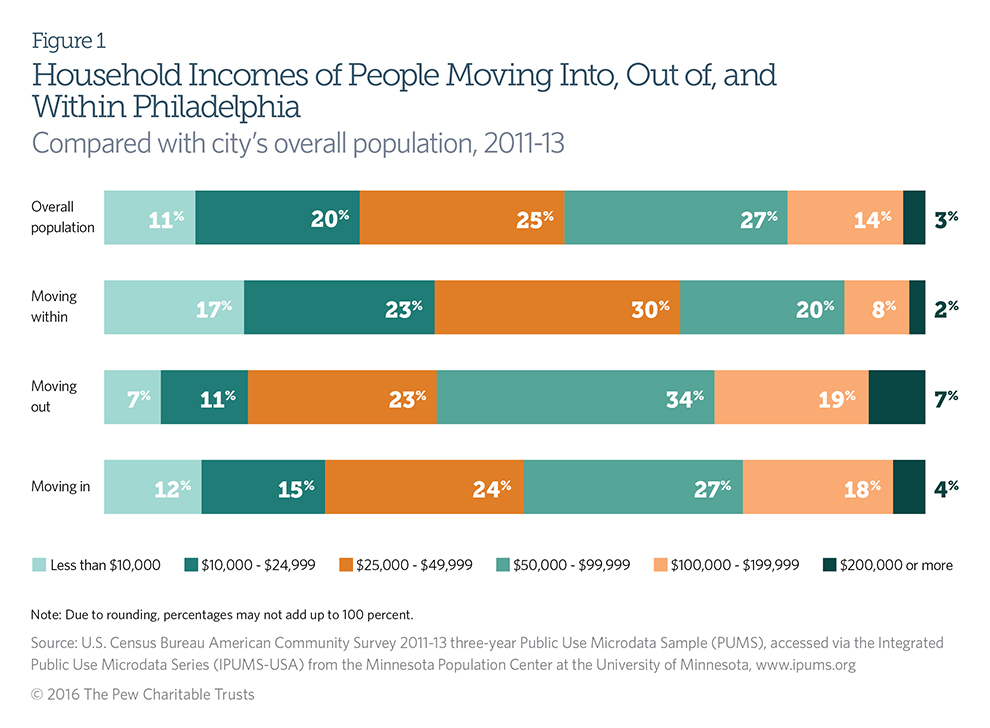 At the other end of the educational spectrum, the pattern was similar. Only 22 percent of intracity movers in Philadelphia had college degrees or better, compared with 23 percent for all city residents and 41 percent for newcomers and 37 percent for out-migrants. 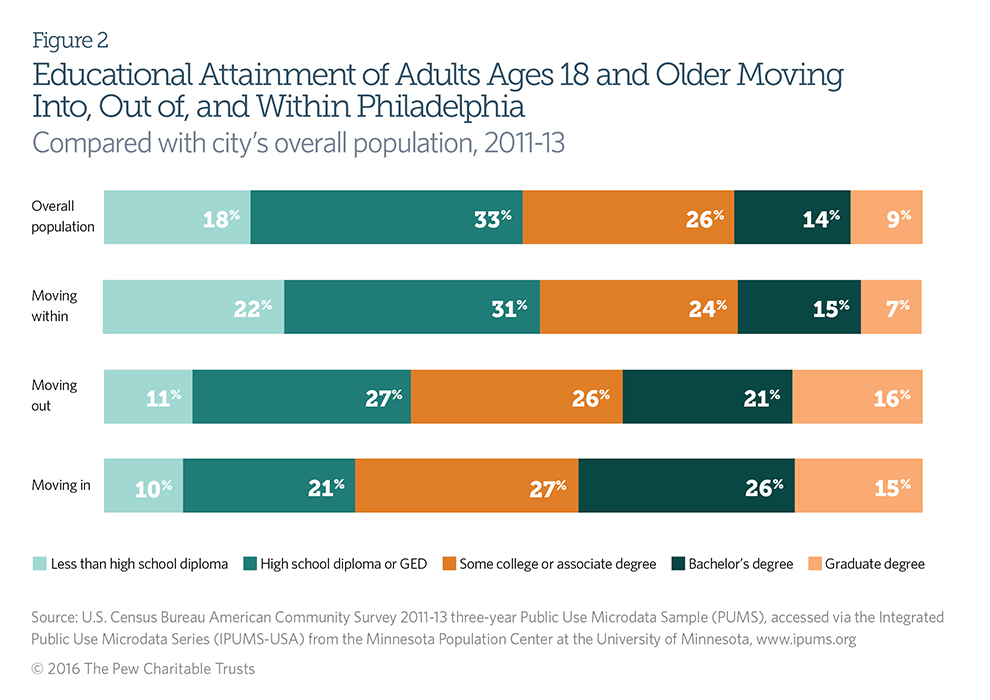 Intracity movers were quite a bit younger than the city population as a whole. For instance, 11 percent of them were under age 6, compared with 8 percent of all city residents. Forty-three percent were between the ages of 18 and 34, which was well above the citywide representation of 29 percent for that age group but lower than the percentages among newcomers (65 percent) and out-migrants (48 percent).

Young adults are highly mobile. Nationally, 27 percent of people ages 18-34 reported moving in the past year.4 This is largely due to events that can lead to changes in residence for many young adults, such as enrolling in college, starting full-time employment, and getting married. 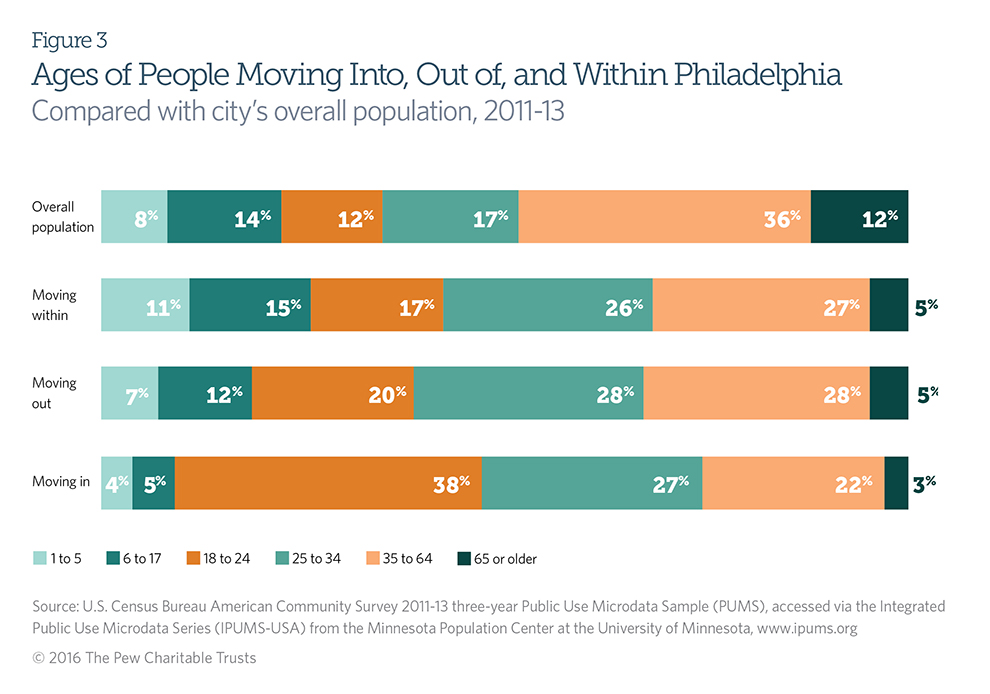 Another way of looking at the same data is to examine the makeup of the households that moved within Philadelphia during the period studied. Fifty-three percent of those households consisted of families with children under the age of 18. That was higher than the percentage for those leaving (45 percent), new arrivals (28 percent), and Philadelphia residents as a whole (48 percent). 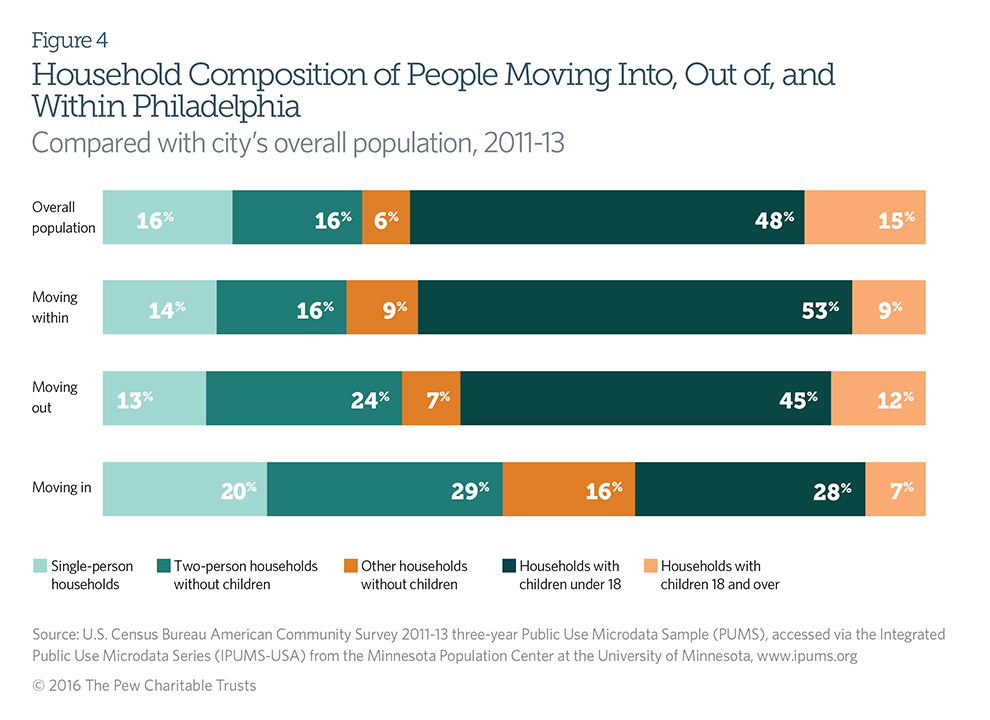 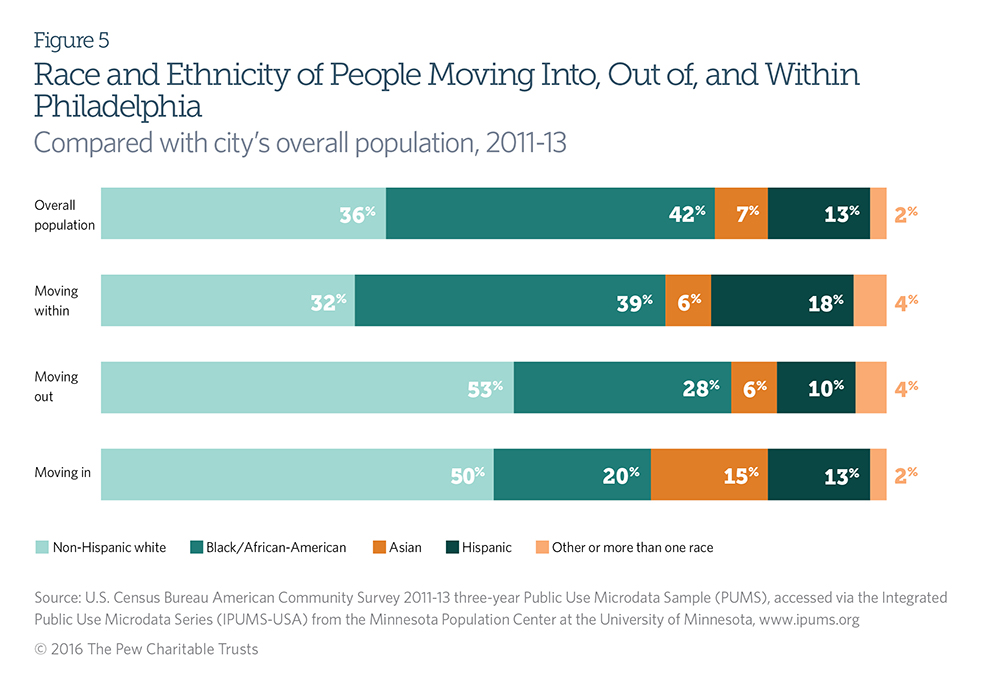 Who is coming to the city—and who is leaving 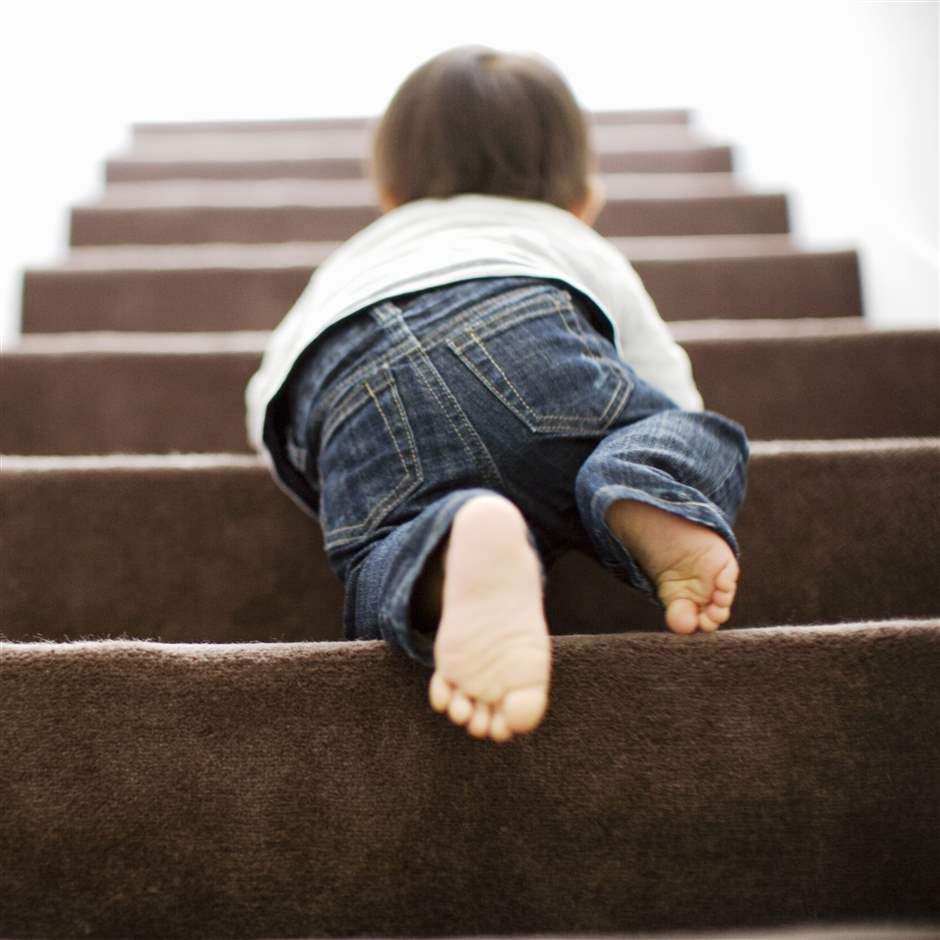 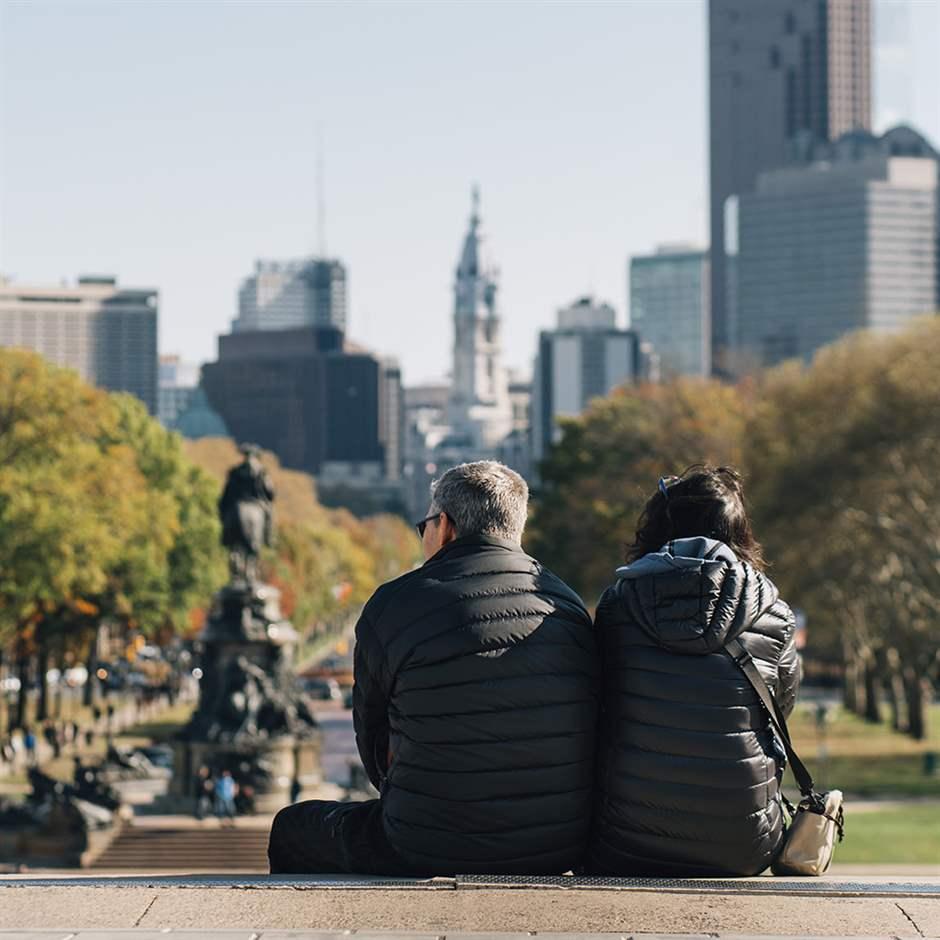 The Most Remote Islands in the Atlantic Ocean Need Protection