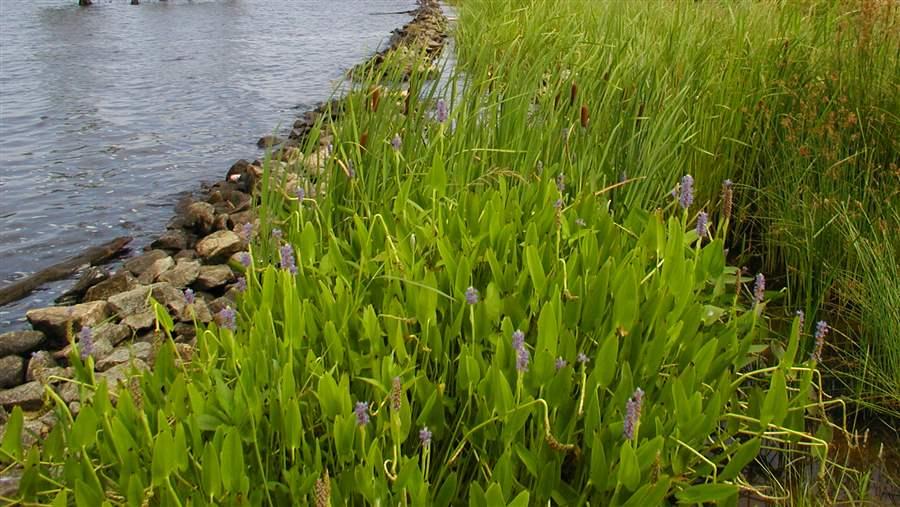 Communities across the country are discovering the benefits of incorporating nature into their development planning and infrastructure. That was the theme of a July 7 webinar, sponsored by Pew, with Charley Chesnutt and David Olson of the U.S. Army Corps of Engineers and Rachel Gittman, Ph.D., a marine scientist who studies shorelines and ecology.

These experts discussed the benefits of living shorelines—bank-stabilization techniques that use natural materials such as plants, sand, and rocks for combating erosion and conserving the essential coastal habitat of fish and marine life, shorebirds, and plants. Living shorelines offer an alternative to hard structures such as bulkheads and concrete seawalls, which can accelerate erosion and eventually fail, disrupting these habitats.

The three also detailed the importance of the nationwide permit for living shorelines that the Corps proposed last month, the first such effort to encourage greater implementation of living shorelines.

Here are highlights of the discussion.

Coastlines are highly diverse and productive

Gittman discussed research from the National Oceanic and Atmospheric Administration showing that more than 75 percent of U.S. fisheries depend on unique ecosystems such as mangroves and salt marshes for feeding and breeding habitats. But she said we are losing that nearshore terrain at an alarming rate because of coastal development.

Additionally, in a forthcoming article—“Ecological Consequences of Shoreline Hardening: A Meta-Analysis” in the journal BioScience—she and her colleagues lay out their findings that concrete seawalls have a significant negative effect on the biodiversity and abundance of marine life and vegetation. In areas with hard or “gray” structures along the shore, the study reported a nearly 25 percent loss of biodiversity and a 45 percent drop in the abundance of individual species. In contrast, the study found no significant difference in the types and number of fish near natural shorelines and those with a combination of rocks and vegetation.

A well-designed living shoreline can protect against storm surge

The federal government has declared 43 major natural disasters this year, of which 26 were flood-related. Our coasts and waterways are absorbing the strong winds and waves from these weather events, which contributes to coastal erosion and degradation. Living shorelines can provide a degree of protection from the storm surge, according to Chesnutt. Although most hard shoreline structures are expected to withstand a storm surge, when they are not well-designed, they can break apart.

“Even a seawall can fail,” he said.

“We love our coasts, and the coast isn’t just where we recreate; it’s where we work and live, and the beaches and harbors are major parts of the U.S. economy,” Chesnutt added. “We need to integrate green and gray solutions for coastal protection.”

Building will continue along the nation’s coasts and waterways

People love to live near beaches, lakes, and rivers. The Army Corps of Engineers authorizes projects along the nation’s waters, and as part of that process allows landowners to use a variety of approaches to safeguard their property, including those that have minimal adverse environmental effects in and near the water. Every five years, the Corps reviews and updates its nationwide permits to account for changing conditions, public needs, and policies.

Olson observed that not all types of shore protections work in all locations. The proposed permit for living shorelines is intended to streamline the approval process for natural stabilization projects.

Olson encouraged participants to comment on the proposed rule, adding that the Corps values public opinion and that he wants the permit process for bank stabilization activities to be as equitable as possible. The rule will be finalized in March.

View slides from the webinar here.