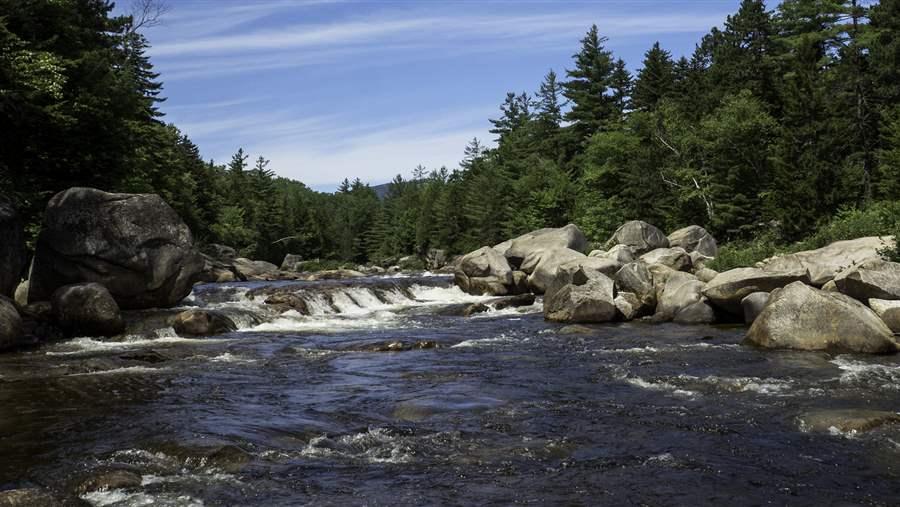 The cool rushing waters of Orin Falls makes the area a favorite of anglers.

In central Maine, three hours north of Portland, lies the Katahdin Woods and Waters Recreation Area—approximately 87,000 acres of pristine land also known as the North Woods. Currently owned by the Elliotsville Plantation, a private foundation, this majestic region of the state is bordered on the west by the world-renowned Baxter State Park, with the East Branch of the Penobscot River running through its core. The North Woods offer abundant opportunities for outdoor activities, such as hiking, canoeing, mountain biking, hunting and fishing, cross-country skiing, snowshoeing, and snowmobiling.

The Elliotsville Plantation wishes to donate this special area of Maine’s wild lands to the federal government to establish a national monument under the management of the National Park Service. Monument protection will help ensure that current and future generations will forever be able to explore and enjoy these extraordinary forests, bogs, rivers, and streams.

The foundation is committed to donating $20 million and raising an additional $20 million as an endowment for the maintenance and infrastructure of the proposed monument. In May, at the invitation of Senator Angus King (I-ME), National Park Service Director Jon Jarvis participated in a public town hall meeting at the University of Maine in Orono to hear from Mainers across the state about this proposal. Well over 1,000 people joined this multihour listening session, with the vast majority expressing strong support for the new monument and giving Jarvis a standing ovation.

A coalition of local, state, and national organizations, including The Pew Charitable Trusts, as well as individual Mainers, are working with the Elliotsville Plantation to advocate for the establishment of this new national monument, and support continues to grow. Among the organizations that have already endorsed the proposal are the Katahdin Area Chamber of Commerce, the Katahdin Area Rotary Club, the Greater Houlton Chamber of Commerce, the Bangor City Council, and the Maine Innkeepers Association, as well as more than 200 Maine businesses.

More than 150 years ago, Henry David Thoreau, who wrote of the need for “the tonic of wildness,” was drawn to Maine’s vast forests during his travels throughout the Northeast. In his book The Maine Woods, Thoreau marveled at the untamed beauty of this region, much of which remains relatively unchanged—even after decades of logging. Protecting this area that inspired a great work of literature is not only good for wildlife and outdoor enthusiasts, but it will also be a boon for the local economy, creating much-needed new jobs and attracting tourists from around the world. That is why, during this 100th anniversary of the National Park Service, Pew will continue to strongly advocate for protecting the North Woods for all Americans—now and in the future.