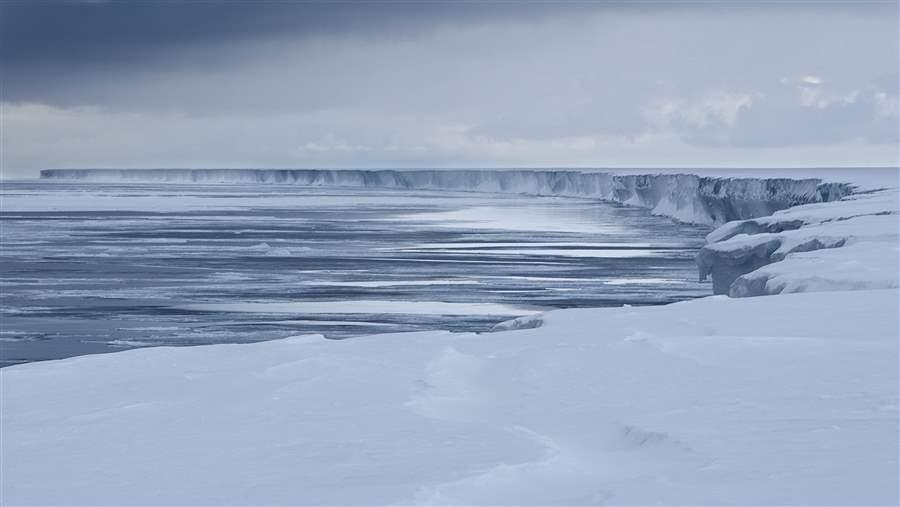 The meeting provided an opportunity for the scientific committees for the Antarctic Treaty and CCAMLR to bring together experts from around the world to discuss better integration of climate change considerations in the management policies governing Antarctica’s land and the surrounding Southern Ocean.

In May 2016, the 39th annual Antarctic Treaty Consultative Meeting (ATCM) took place in Santiago, Chile, where world leaders gathered to discuss regulations governing human activities in the Antarctic and assess the effects of research operations on the region. Among the observers were representatives from The Pew Charitable Trusts, the Antarctic and Southern Ocean Coalition, and the International Association of Antarctica Tour Operators.

The meeting marked the 25th anniversary of the signing of the Madrid Protocol, which established a ban on mining and mineral extraction on the Antarctic continent and in the Southern Ocean. This landmark agreement reaffirmed Antarctica as a place of peace and science, but it has been widely misunderstood in recent years.

A common misinterpretation is that the protocol will expire in 2048, raising concerns for many advocates of environmental conservation in the region. However, the mining ban does not have an expiration date; it simply allows for a review by the consultative parties at that time in order to assess its future. On this significant anniversary, treaty members adopted a resolution that reaffirms their commitment to sustaining mining protections into the future.

Marine protected areas (MPAs) were also a popular topic in the margins of the meeting as the Commission for the Conservation of Antarctic Marine Living Resources (CCAMLR) continues to pursue its mandate to establish a representative network of large-scale MPAs in the Southern Ocean.

The Chilean Antarctic Institute hosted a special meeting in Punta Arenas on May 19 and 20 to allow further discussion of the MPA issue. The meeting provided an opportunity for the scientific committees for the Antarctic Treaty and CCAMLR to bring together experts from around the world to discuss better integration of climate change considerations in the management policies governing Antarctica’s land and the surrounding Southern Ocean. MPAs were widely recognized as an essential tool for providing climate change reference areas, establishing refuge areas for marine life, and promoting understanding of the impacts of fishing on Antarctic marine ecosystems. Recommendations included improved collaboration between the two governing bodies, such as increasing the involvement of leading scientists and other research organizations, and enhancing methods for sharing information.

Pew advocates for large-scale marine reserves in the Antarctic and will continue to work with ATCM and CCAMLR representatives to ensure that management measures are based on the best available science and to set aside sensitive areas for protection.