The ocean covers about 70 percent of the world’s surface, with more than half of that water beyond the jurisdiction of any nation. This vast region and the waters within it are known as the high seas. They belong to everyone and to no one. At their bottom lies the international seabed. Found there are marine forms similar to those on land: mountains, hills, plains, canyons, and volcanoes, all amid ecosystems barely charted by science.

Portions of the international seabed also contain mineral deposits in richer concentrations than available on land. Examples include copper, gold, platinum, zinc, magnesium, and the family of minerals known as rare earth elements. Rising demand for these minerals that are crucial to modern technologies, along with advances in undersea equipment, have recently prompted serious interest in commercial mining in these global commons. 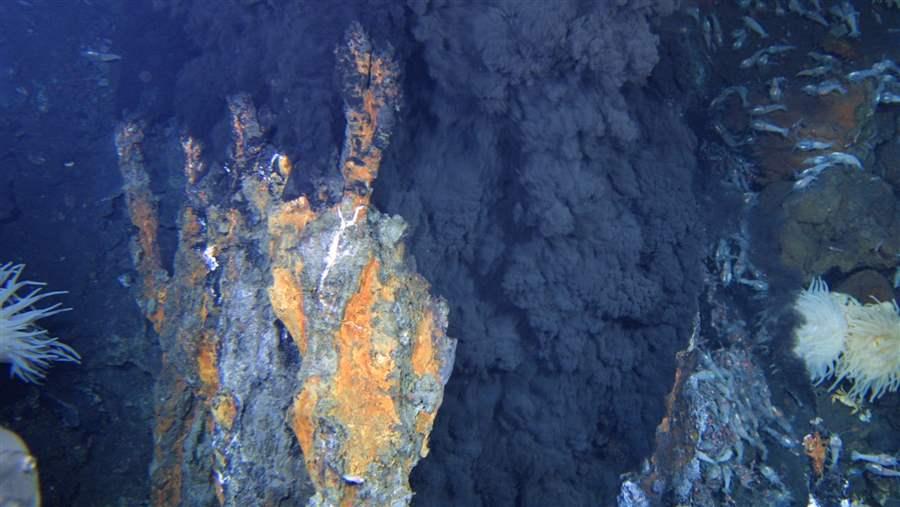 Mining will affect the seabed, the water column above it, and all adjacent areas.

Q: Who governs activity on the international seabed?

A: The U.N. Convention on the Law of the Sea and its implementing agreement govern activity on the international seabed. The Law of the Sea treaty declares that the riches of the seabed are the “common heritage of mankind” and that their conservation and exploitation are the responsibility of the International Seabed Authority (ISA), headquartered in Kingston, Jamaica. Until recently, the ISA’s prime activity has been oversight of exploration contracts under which ISA member states or their corporate designees conduct ecological and geological surveys in particular parcels of the ocean. In the last few years, however, many ISA members have put a high priority on developing exploitation regulations that will govern all mining operations. As a result, the ISA has directed that its secretariat, using advice from its Legal and Technical Committee, must produce rules governing the exploitation of deep-sea minerals so that mining can commence. The rules are to be finalized by 2018.

Q: Why did Pew develop a seabed mining project?

A: The ISA rule-making process presents a historic opportunity, as rules will be written to govern an extractive activity before it begins. Pew is working to help the ISA and its stakeholders—governments, industry, and civil society—gain access to the best scientific and regulatory information available so that the rules safeguard marine life and ensure healthy oceans. The project supports a mining code that establishes large protected areas in ecologically significant portions of the seabed, along with precautionary standards to minimize environmental damage where mining does occur. Once written, the ISA code can become the template for national regulations on deep-sea mining within the exclusive economic zones of every coastal country.

Q: What seabed ecosystems could be mined?

A: There are three kinds of deep-sea formations where mining is being considered: potato-size rocks called manganese nodules that are scattered on the bottom of the Pacific Ocean; thin crusts covering underwater hills and mountains; and hydrothermal vent zones at the undersea junctions of the Earth’s tectonic plates. The vent zones hold particular interest to scientists. Before 1977, researchers were unaware of these areas, where underwater chimneys inhabited by unique organisms emit sulfuric plumes, demonstrating that the Earth can nurture entire ecosystems independent of solar energy.

Q: What is so important about the deep sea?

A: Very little is known about the deep sea and the treasures it may hold. After 10 years of work, the Census of Marine Life organized 120,000 species into a database, including more than 5,000 new species. Leading scientists estimate that there may be more than 750,000 marine species yet to be identified. Despite advances in exploration technologies, less than 0.05 percent of the ocean floor has been mapped at the level of detail to be able to detect objects a few meters in size. Marine resources, in addition to being a source of food, have also led to advancements in medicine. For example, elements derived from some deep-sea sponges have been used to inhibit tumor growth. This area needs to be protected, especially while so much of it remains unknown.

Q: Why is Pew concerned about seabed mining if no one is mining yet?

A: Mining will affect the seabed, the water column above it, and all adjacent areas. Even operations that use best practices to minimize harm will involve dramatic disruptions of ecosystems. Seabed formations will be scooped, dredged, or severed. The deposits will be piped up to a surface ship through a miles-long tube, processed on board to separate out the valuable ores, and then the nonvaluable ones will be pumped back into the sea. Operations conducted well below best-practices standards could cause massive ecological harm.

Given the environmental stakes involved, Pew’s seabed mining project will concentrate its energies on helping the ISA write regulations that set aside large, ecologically important no-mining areas and that impose precautionary standards to minimize environmental damage wherever mining is allowed.