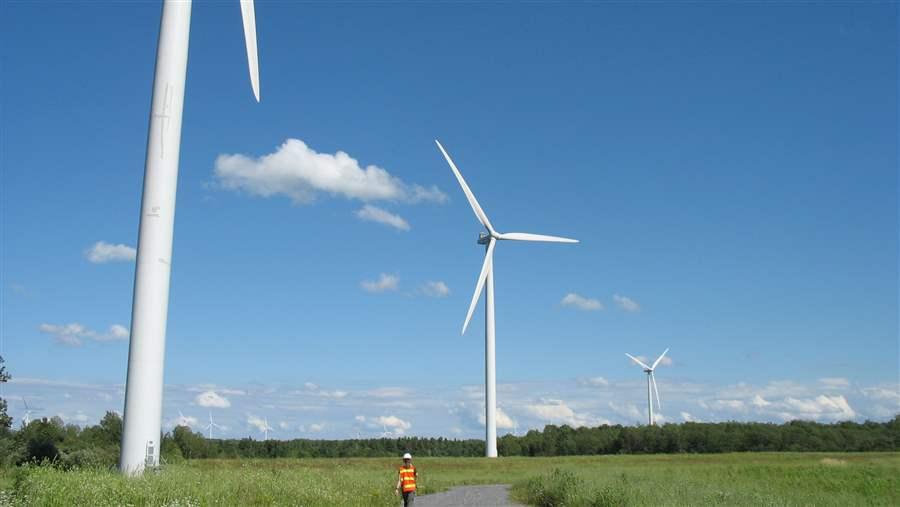 Demand for wind generation is increasing, with global investment reaching nearly $110 billion in 2015.

The global embrace of wind power shows no sign of slowing. Global Wind Day, on June 15, celebrates how wind can help modernize the way countries produce electricity and spurs conversations about how the rapid growth and accessibility of this clean, renewable resource holds the promise of a worldwide energy transformation.

As of 2015, renewable energy investment in the developing world exceeded that of the developed world for the first time. Wind power played a significant role in this shift. Nearly $110 billion was invested globally in new wind generation last year, an increase of 4 percent over 2014, with more than three-fifths of that total spent in developing countries. Those funds supported the addition of more than 62 gigawatts (GW) of wind power—enough for about 45 million U.S. homes—to the global electric grid, an increase of more than 26 percent from 2014.

Although overseas markets are growing, the U.S. still leads the world in wind energy generation. Wind provided 4.7 percent of all electricity produced in the country in 2015, including 8.6 GW that were put into service last year—enough to power about 6.5 million homes. The Department of Energy projects that wind could supply 20 percent of the nation's electricity by 2030. 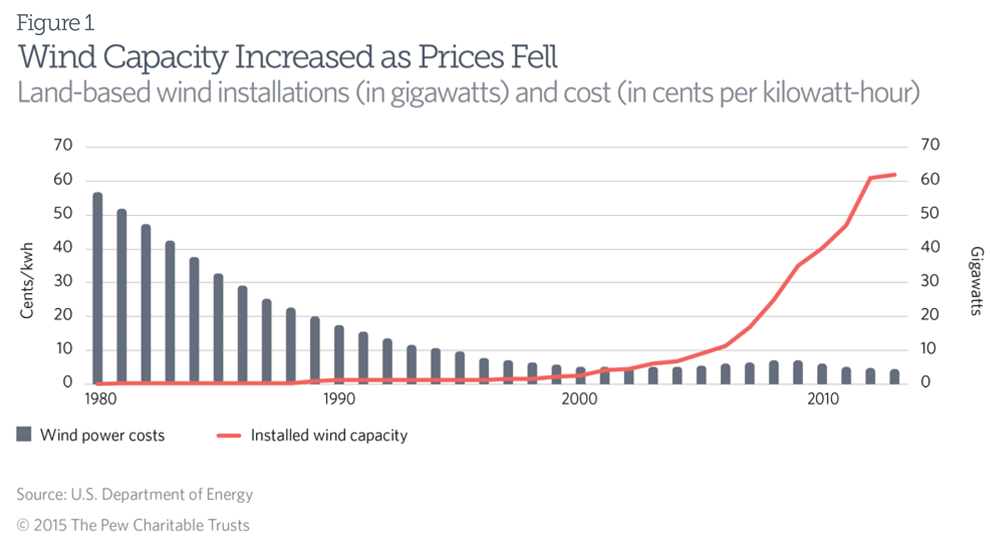 Federal policy, such as the U.S. production tax credit, has played a key role in the U.S. industry’s expansion. Figure 1 shows how installed wind capacity increased as the price declined by more than 50 percent.

With decreasing costs and the recent extension of U.S. federal tax incentives for wind, development remains robust in 2016. Wind projects under construction as of February have an expected output of 9.4 GW, enough to power an additional 7 million U.S. homes.

Why is wind power growing?

The rapid growth in wind power generation is attributed in part to its increasing cost-competitiveness. Wind’s average global levelized cost of energy—the adjusted cost used to compare different methods of electricity generation—fell by 14 percent from 2009 to 2015. Policies, market dynamics, and technological advances have played a role in these declines. 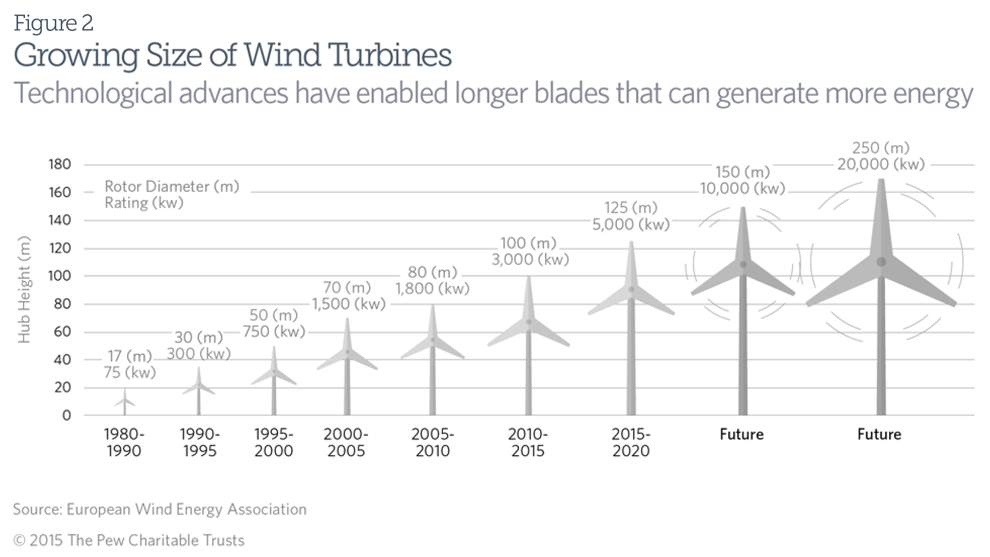 Federal research and development funding, testing facilities, and efforts to connect innovators with the national laboratories have accelerated the creation of cutting-edge wind technologies. And the efficiency of wind-power installations continues to increase due to taller towers and larger turbines with longer blades, as Figure 2 shows.

International investment in renewable energy such as wind is likely to continue to grow. More than 190 nations—including the United States, European Union member states, and several large developing economies such as Brazil, China, and India—signed a historic agreement in December to combat climate change. At the same time, 20 of those nations also launched Mission Innovation, an effort to double overall public investment in clean energy research and development to $30 billion by 2020. And in a related move, 28 private investors formed the Breakthrough Energy Coalition to complement these public sector initiatives by providing additional financial support for early-stage energy technologies. 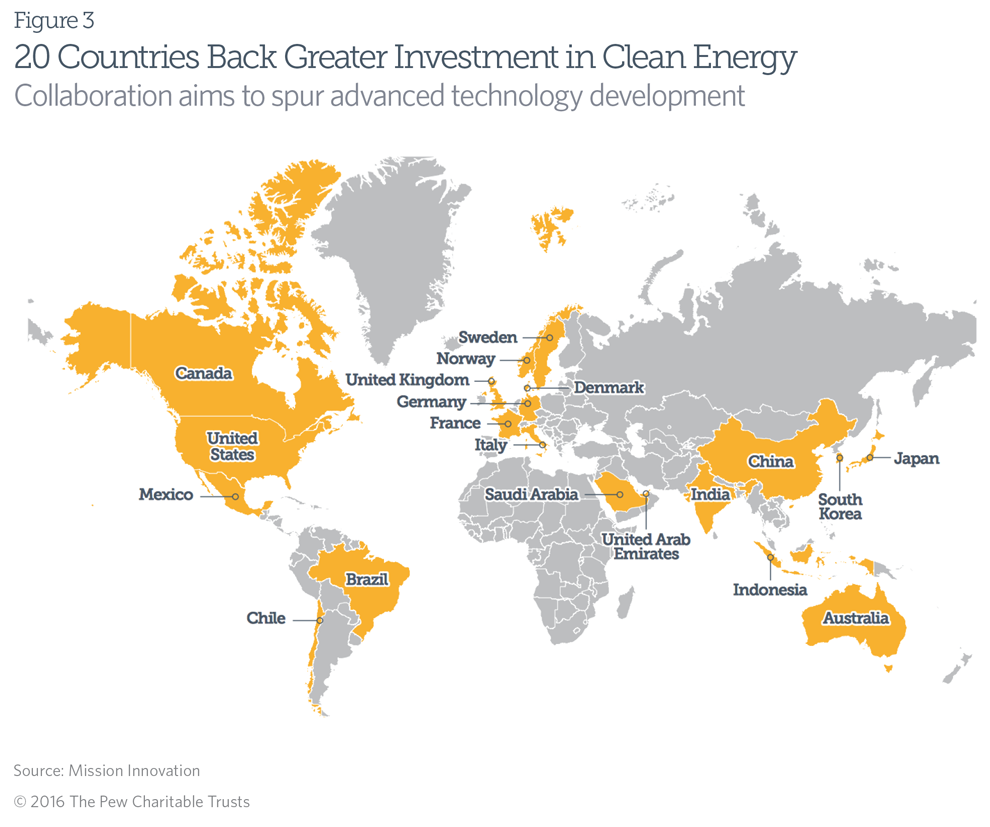 In June, the U.S. hosted an international meeting with nations participating in Mission Innovation to announce their long-term plans to meet the doubling target, as well as initiatives in energy research and development. The U.S. is launching a service to increase innovators’ access to financing options for private investment in clean technology.

Overall, increasing investment in wind energy around the world is a testament to the growing attractiveness of this clean, renewable power source as a cost-competitive rival to traditional fossil-fuel generation.