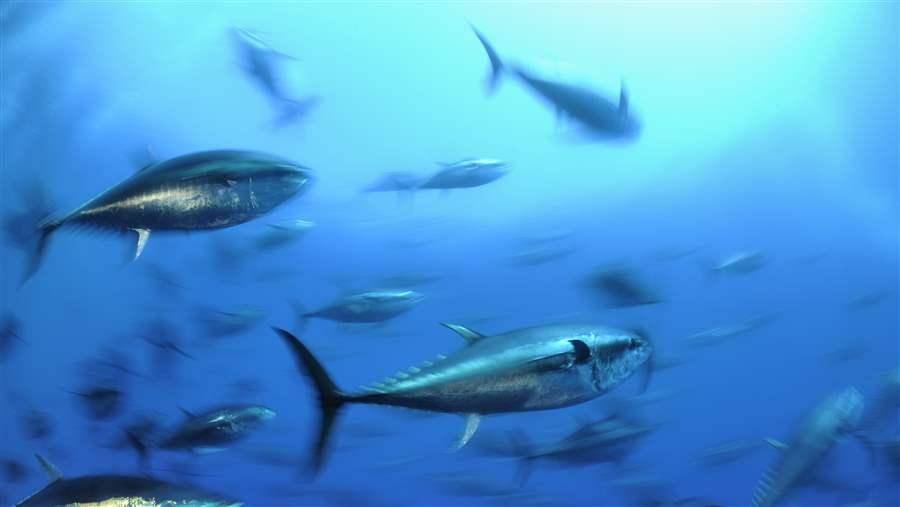 This season, fishermen, traders, and authorities will be able to electronically track Atlantic bluefin tuna in near real time as they are caught and traded.

On May 26, commercial purse seine vessels will begin fishing in the Mediterranean Sea for Atlantic bluefin tuna. If recent history is any indication, most countries will catch their quota in days, and a majority of those tuna will be transferred to at-sea pens called ranches, where they will be fattened before being sold.

There will be one noticeable difference this season from previous years, however: Fishers, traders, and authorities will be able to electronically track these fish in near real time as they are caught and traded.

This marks the beginning of what should become the new normal for international efforts to keep illegal catch and trade of Atlantic bluefin out of the legitimate market. Until this season, fishers tracked their catch on paper, a slow and cumbersome process that allows for easy concealment of bluefin caught in excess of the quota.

With electronic documentation, fishermen enter into a database detailed information on every bluefin caught, and each fish is assigned a unique identification number. Upon first sale of the fish and each time it is traded, new information will be entered and then validated by government authorities before the bluefin is permitted to change hands. By allowing for near real-time reporting, allowing only authorized users to access the system, and controlling the type of information entered, electronic bluefin catch documentation (eBCD) will help to speed bureaucratic procedures while significantly reducing misreporting and fraud.

The move away from paper-based tracking of bluefin catch and trade in favor of a digital system didn’t happen overnight. In 2010, the International Commission for the Conservation of Atlantic Tunas (ICCAT) started building the eBCD system. Now, after multiple delays and technical issues, the system is live and ready to be used.

As of May 26, under ICCAT rules, all catch destined for ranches must be tracked with an eBCD. Individual governments can register their intent to use the paper documentation for bluefin not going to ranches, but ICCAT will grant exemptions only through the end of June unless significant technical issues prevent a government from using the electronic system beyond that date. So far, Morocco, the European Union, and the United States have requested extra time to switch to the eBCD system to allow for resolution of technical issues and training.

Illegal fishing and trade of Atlantic bluefin is a well-documented problem, especially in the Mediterranean. The Pew Charitable Trusts’ new report, Netting Billions, estimates the value of commercial Atlantic bluefin fisheries at $810 million. That’s hundreds of millions of reasons for criminals to want a piece of the bluefin black market.  Because one of these fish can be worth more than a ton of most other tuna species, every single bluefin caught illegally undermines law-abiding fishermen and the management measures put in place to help the species achieve a full recovery.

Now that the electronic system is in place, getting illegal fish to market is going to be a much tougher task.

ICCAT and its members should be commended for their transparency in implementing the eBCD system, including revealing the countries that have requested more time. This aboveboard approach to fishery management instills confidence among authorities, industry, fishery managers, and conservation groups and provides an incentive for all ICCAT members to do the same. It’s important for the Commission to stay on this path over the next month to ensure that pressing  technical issues with the eBCD system are addressed by the June 30 deadline.  This will ultimately enable full implementation of the system and raise the bar for fishery documentation schemes globally.