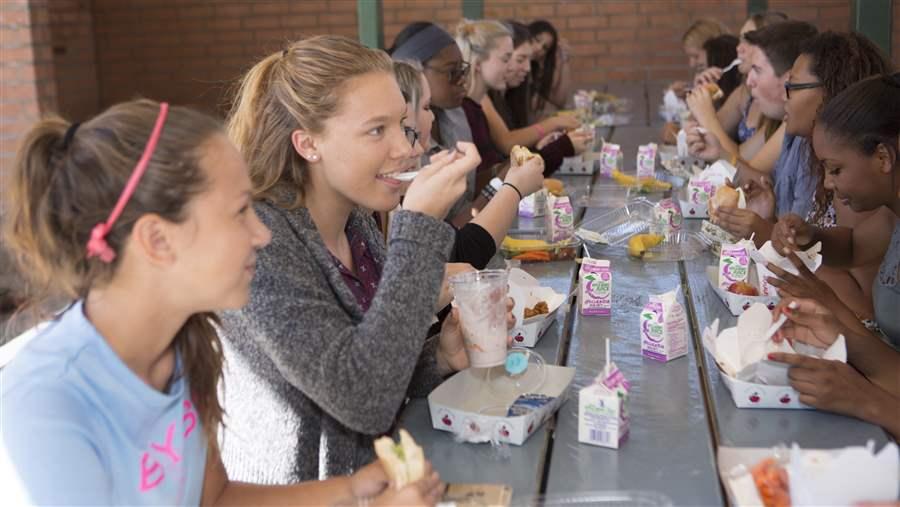 A bill to reauthorize child nutrition programs, recently introduced in the House Education and Workforce Committee, could weaken healthy standards for school breakfasts, lunches, and snacks.

The nation’s child nutrition programs were due to be reauthorized in 2015. These important programs provide meals to millions of children each day: The lunch program alone serves more than 30 million students a day and operates in nearly 95 percent of public schools nationwide. The Pew Charitable Trusts strongly encourages Congress to move forward with reauthorization this year but to do so in a way that builds on the progress that has been made over the past five years, maximizes children’s access, and minimizes unnecessary paperwork for schools and families.

The U.S. House of Representatives is considering reauthorization through the Improving Child Nutrition and Education Act of 2016 (H.R. 5003). Although the legislation does prioritize important investments in school facilities by including core pieces of the bipartisan School Food Modernization Act that would help districts access federal loan guarantees and grant assistance to renovate outdated and poorly equipped kitchens and cafeterias, several areas of the legislation raise serious concerns:

H.R. 5003 would weaken nutrition rules for food sold in cafeteria a la carte lines. For example, under the current standards, desserts such as cookies, cake, and ice cream may be offered only as part of a balanced meal or sold separately as a snack if they fall within calorie, fat, and sugar limits. The bill would repeal these guidelines for foods sold a la carte, allowing schools to offer less healthy versions of these “occasional” treats. Children as young as 5 could go from having cookies or fries with their lunches once in a while to buying and eating them every day.

Although the bill would not directly modify rules for full meals, it instructs the U.S. Department of Agriculture (USDA) to regularly review school meal program regulations, including nutrition standards, and revise them if school administrators report that compliance has increased costs or discouraged student participation in meal programs. Although more than 98 percent of districts are already meeting lunch requirements, claims of hardship from a few could force the USDA to lower the bar for all.

The USDA already offers free training, technical assistance, peer mentoring, and other valuable resources to districts that need help in serving healthy meals and overcoming budget issues, which are often related to local workforce policies, meal prices, menu design, and other factors. Rather than maintaining high standards and encouraging more of such support efforts, the legislation would essentially allow the least successful programs to drive the nation’s school nutrition policies and risks undermining the important progress most schools have made.

The House bill also would repeal nutrition standards for fundraisers occurring during the school day, which could complicate state and local efforts to promote healthy fundraising practices.

States already have broad authority to determine how often to exempt on-campus fundraisers from national nutrition standards, and in recent years, 46 have established or revised their rules. Meanwhile, many districts have been inspired to choose fundraising activities that promote student and community wellness such as walk-a-thons and sales of plants or fruit rather than candy or pizza. Making it easier to hold unhealthy fundraisers will only lessen the incentive for states and schools to find creative ways to raise money while keeping kids healthy.

H.R. 5003 would allow up to four meals per school year to be served without nutrition standards if families were invited to join the meal. Schools should be strongly encouraged to invite parents and families to eat meals with their children, but making such special menus less nutritious than those served every day only undermines efforts to promote lifelong healthy eating habits.

Instead, offering families the same meals their children eat each day has proved to be an effective family engagement practice for many school meal programs, showcasing healthy, creative recipes and building support among parents and the community. For example, one school in Maine celebrates Grandparents Day by inviting families to a delicious Thanksgiving feast that features locally grown produce and meets current lunch nutrition guidelines. School meals can and should be healthy and delicious every day of the year.

Currently, if 40 percent or more of a school’s students receive aid from other federal food or anti-poverty programs, the school can opt to offer free meals to all students without additional paperwork in exchange for a reduced per-student reimbursement. The legislation would raise the threshold to 60 percent of students, cutting the number of schools eligible for this important option, which has been shown to reduce error rates and paperwork in program applications and combat hunger by increasing children’s participation in meal programs. The bill would force thousands of schools to go back to collecting and processing free or reduced-price lunch applications from each family and would threaten the access to healthy school meals of at-risk children nationwide.

Eighty-two child nutrition leaders from across the country traveled to Washington on Feb. 22 and 23 to seek support for school meal programs. The group met with almost 100 congressional members and staff to share success stories from their home districts and to help policymakers understand why it is so important for them to reauthorize school nutrition programs this year.