This week, the nation readies itself for hurricane season in the Atlantic, which officially begins June 1 and lasts until Nov. 30, and researchers are predicting five hurricanes in 2016, including two at Category 3, 4, 5. U.S. policy, however, is not adequate to meaningfully reduce the effects of these events on communities and the economy. National Hurricane Preparedness Week starts Monday, May 16, and presents a key opportunity to evaluate our current strategies and discuss new solutions.

Flooding, often due to severe storm events, is the nation’s costliest and most deadly natural disaster threat: Between 1980 and 2013, the United States suffered more than $260 billion in flood-related damages. Already this year, flooding and storms have resulted in federal disaster declarations in nine states. As we brace for the next storm, Congress can take important actions, including reforming the National Flood Insurance Program (NFIP), investing in the National Pre-Disaster Mitigation Program, and supporting nature-based mitigation techniques.

Make a down payment on flood recovery 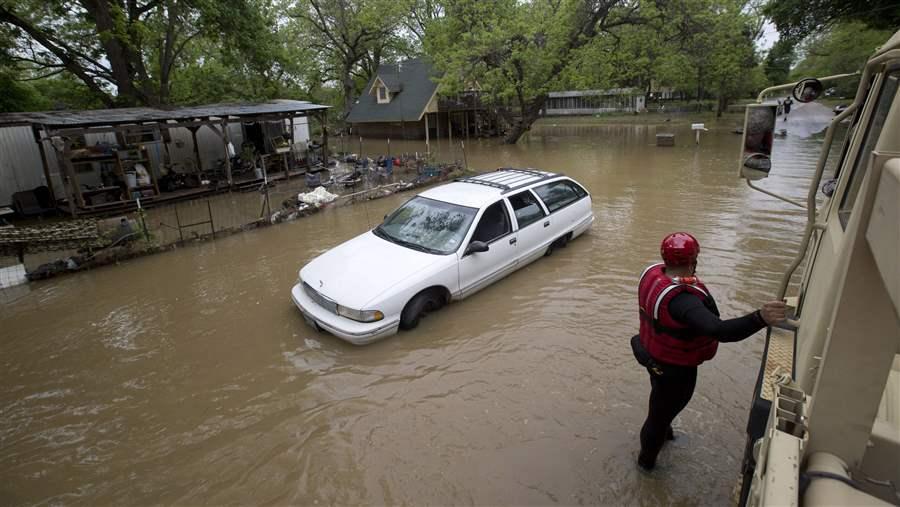 Army National Guard vehicles take rescue workers to check on residents who decided to stay in their homes during a flood.

The NFIP is critical to flood recovery, providing federally backed coverage to roughly 5 million homeowners and small businesses in more than 22,000 at-risk communities. The program, which sets modest flood plain management requirements for participating localities, was established to make up for the lack of private sector flood insurance and help reduce federal spending on disaster response and rebuilding.

Initially, Congress authorized rate subsidies to help those living in flood-prone areas with the expectation that subsidies would diminish over time as communities acted to better manage development in flood plains and flood-proofed or moved at-risk structures. Nearly 50 years later, however, populations living in flood zones have grown, the number of properties suffering repeat losses has increased, subsidies continue, and the NFIP is nearly $24 billion in debt.

The program is due for reauthorization in fall 2017, giving Congress an opportunity to modernize it. To effectively address the cost and impact of flooding nationwide, policy reforms must include rate-making rules that reflect and communicate actual risk, procedures to ensure that the program has sufficient financial reserves to respond to catastrophic events, and incentives to compel communities and homeowners to prepare in advance of floods.

Invest in planning rather than spending on recovery 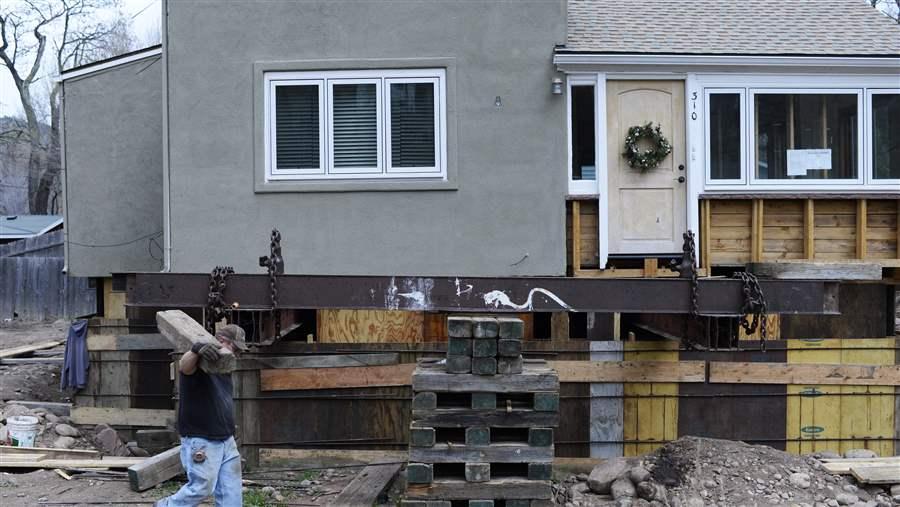 Many localities have mandated that all homes on flood plains or those being rebuilt have raised foundations, such as this one in Lyons, Colorado.

Congress should shift federal resources from post-disaster response to pre-disaster planning to help Americans prepare for storms and floods. An economic analysis from the Federal Emergency Management Agency (FEMA) indicates that every $1 invested to reduce disaster risk saves the nation an average of $4 in emergency response and recovery.

FEMA’s National Pre-Disaster Mitigation Program (PDM) is of critical importance in this effort. The program provides competitive grants for planning and preventive measures that reduce overall risk to people and assets. Historically, demand for the program has far exceeded available funding. This year, Congress has the opportunity to prioritize smart planning and preparation before a catastrophic storm by appropriating $100 million dollars for PDM in fiscal year 2017.

These investments would support communities that undertake projects such as retrofitting facilities, constructing safe rooms, or elevating or relocating flood-prone homes to protect from future disasters. 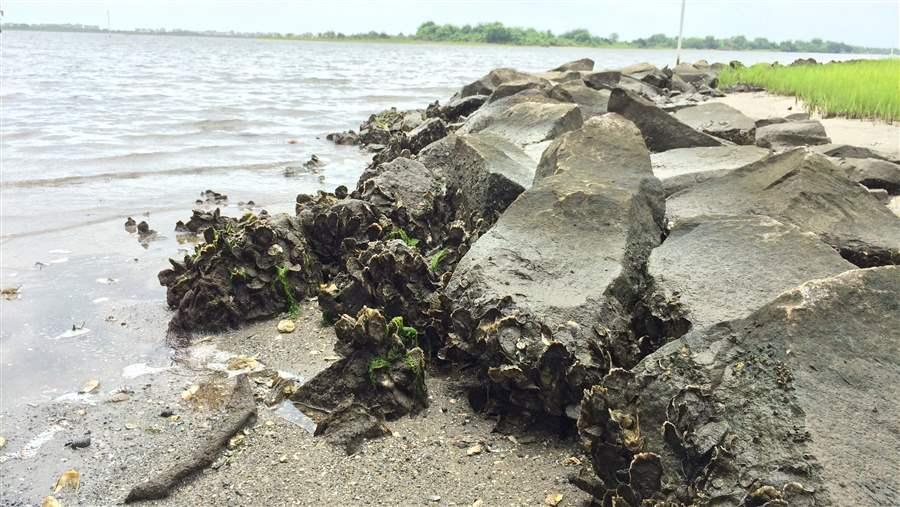 Oysters on a rock sill are part of this living shoreline at Morris Landing in Holly Ridge, North Carolina. Such natural defenses reduce erosion and absorb storm surge.

In January 2015, President Barack Obama issued an executive order establishing a standard to reduce the risk and cost of future floods. It required all federally funded projects such as buildings, roads, and other infrastructure located in flood plains to be constructed to better withstand the impact of flooding. As part of his directive, the president called on agencies to use natural and ecosystem solutions, when possible.

In coastal areas, beaches, wetlands, and marshes provide the first line of defense to slow and absorb storm surges and hurricane winds. Protecting and restoring natural areas not only help guard against flooding, but also provide recreation and tourism opportunities and support local economies and job creation. Coastal wetlands in the U.S. provide an estimated $23 billion each year in storm protection benefits.

Now Congress has the chance to advance nature-based solutions by supporting key programs at the National Oceanic and Atmospheric Administration, including the Habitat Conservation and Restoration Program, Coastal Ecosystem Resiliency Grants, and Regional Coastal Resiliency Grants. With more than one-third of the U.S. population living in coastal counties, these programs make it possible for the nation to harness the benefits of natural systems, protect communities against hazards, and support ecosystem-dependent economic activity.

Officials from the National Guard, the Federal Emergency Management Agency (FEMA), and the National Oceanic and Atmospheric Administration (NOAA) participated in a discussion about the federal recovery and response infrastructure at a Feb. 1 event hosted by The Pew Charitable Trusts titled &ldquo;Extreme Weather&mdash;Our Nation&rsquo;s Response.&rdquo;