Dental care is one of the nation’s greatest unmet health needs.1 In particular, communities of color have much higher rates of tooth decay and tooth loss and fewer dental visits and preventive treatments than white populations. Economic hardship also negatively affects access to dental care for many people of color.2 Although more research is needed to understand and address the factors that contribute to dental health disparities, significant evidence shows that communities of color face real problems and indicates that the nation’s dental care delivery system is failing to adequately support the oral health of all Americans.

People who receive regular dental care and develop good habits early in life tend to have better lifelong oral health. Children of color see dentists and receive preventive services, such as fluoride treatments or sealants, less often than their white peers do.3 For example, only 10 percent of Hispanic and black children received any preventive service in 2009, compared with 17 percent of white children.4 American Indian and Alaska Native children face particularly severe barriers to care, largely because of geographic isolation and a lack of available providers.5 Poverty, which disproportionately affects communities of color, can create additional hurdles for children in accessing dental care:6 Only about one-third of U.S. dentists accept Medicaid. 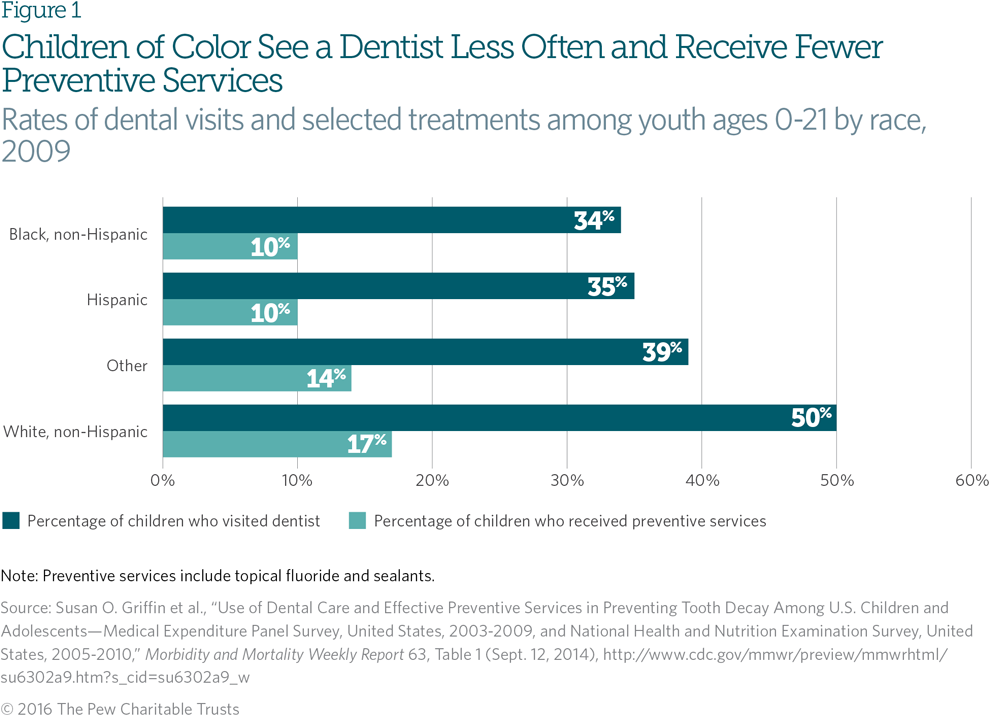 Asian, black, and Hispanic children are less likely than their white peers to have sealants

One of the most effective preventive treatments available for children is dental sealants, which are plastic coatings that protect the chewing surfaces of teeth from bacteria. Sealants can reduce decay by 80 percent in the two years after placement and continue to be effective for nearly five years.7 Although some states have eliminated income and racial disparities in sealant application through the use of school-based programs and other efforts, rates nationally are consistent with those for other preventive services: Asian, black, and Hispanic children remain less likely than white children to have even one dental sealant. This disparity may be a contributing factor in the higher rates of decay present among children of color. 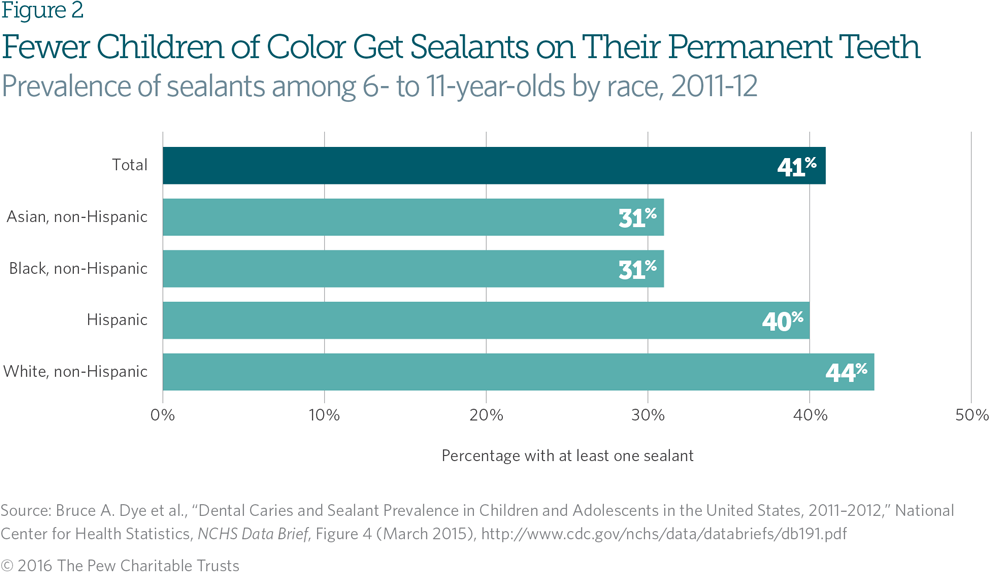 Lower rates of dental visits and preventive care may contribute to the higher rates of untreated tooth decay among Hispanic and black children and adults. According to data collected in 2011 and 2012, Hispanic and black 2- to 8-year-olds were about twice as likely as whites to have untreated decay.8 During the same period, black working-age adults were nearly twice as likely to have untreated decay as white working-age adults, 42 percent compared with 22 percent.9

American Indians and Alaska Natives have the poorest oral health of any U.S. population. Preschool-age American Indian children in 2014 were four times as likely as white children to have untreated tooth decay—43 percent compared with 11 percent. In addition, 2 in 3 Native Americans ages 35 to 44 had untreated decay in 1999, the most recent year for which nationwide data are available. Further, recent research from the Pine Ridge Reservation in South Dakota—one of the largest native communities in the country—found that 97 percent of adults had untreated decay in 2011, compared with 27 percent of all adults in the U.S.10 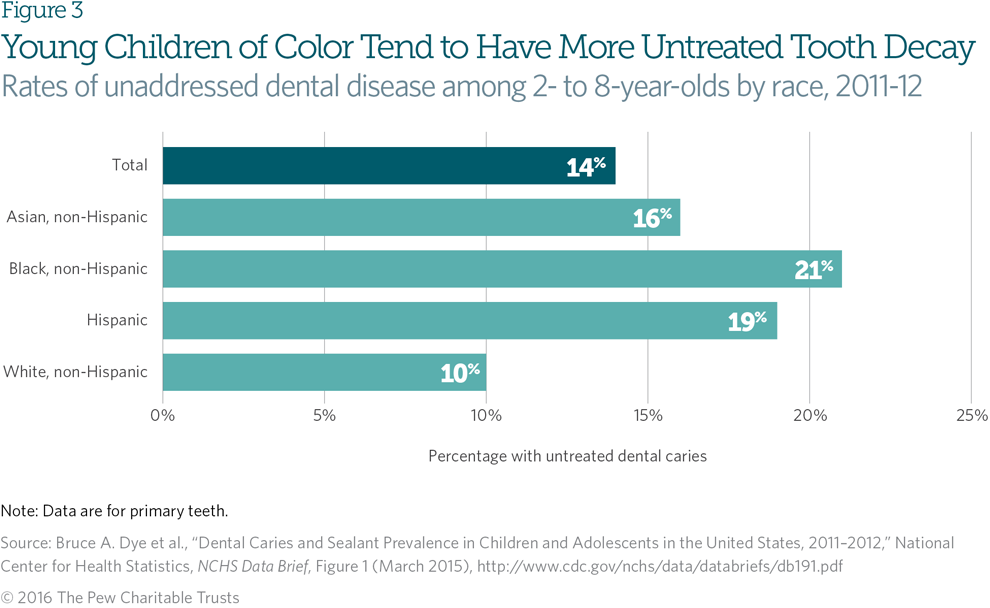 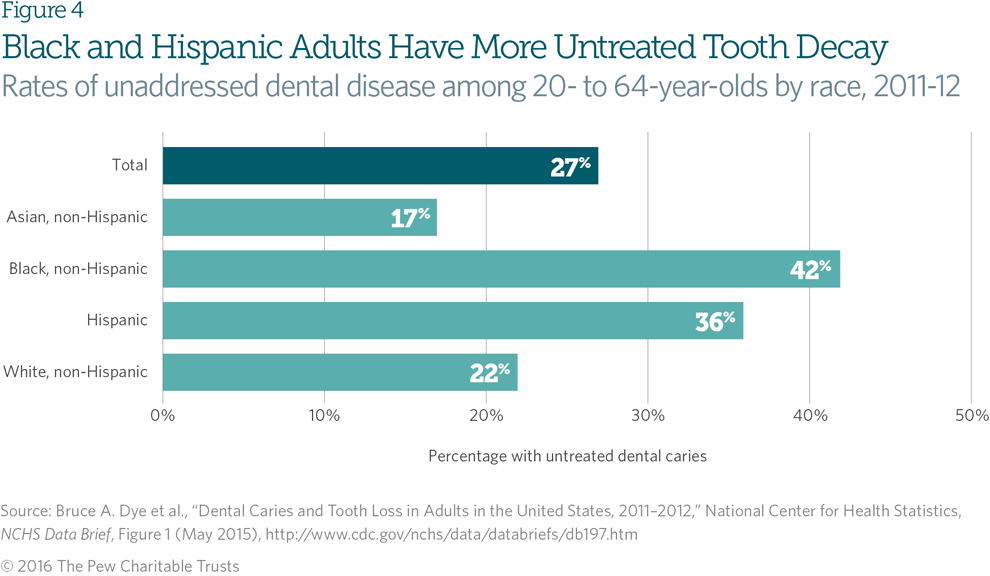 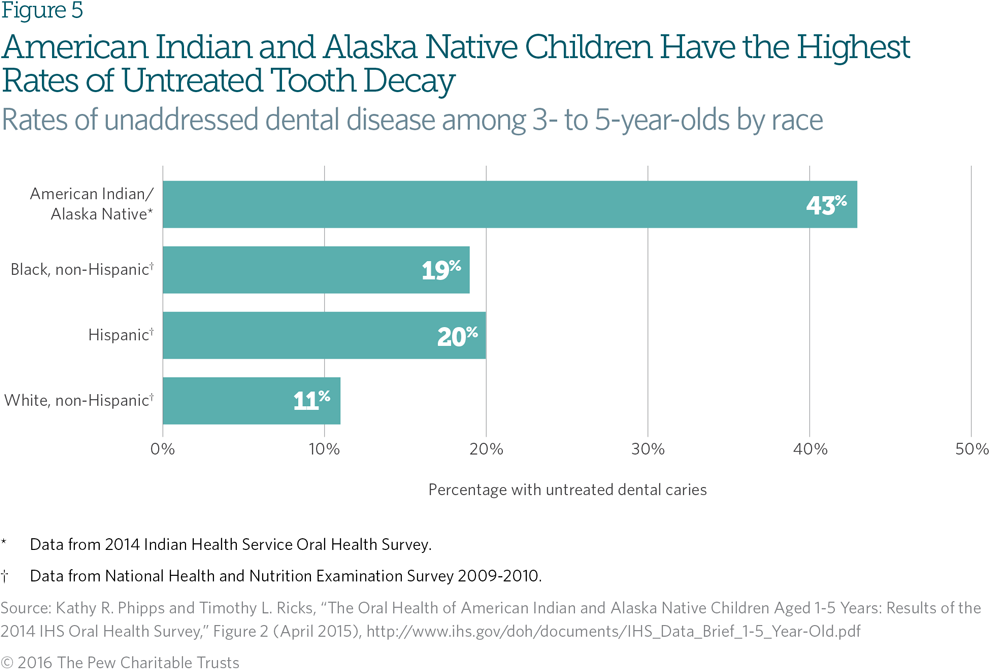 Inadequate preventive care and untreated decay have consequences. Over time, teeth and gums become seriously diseased and can require costly treatment or extraction. Consistent with their higher rates of untreated decay, adults of color are more likely to lose teeth as a result of dental disease. Compared with their white peers, black, Asian, and Hispanic working-age adults are more likely to have had a tooth pulled because of tooth decay or gum disease, and Asian and black seniors are much more likely than white seniors to have lost all of their teeth. 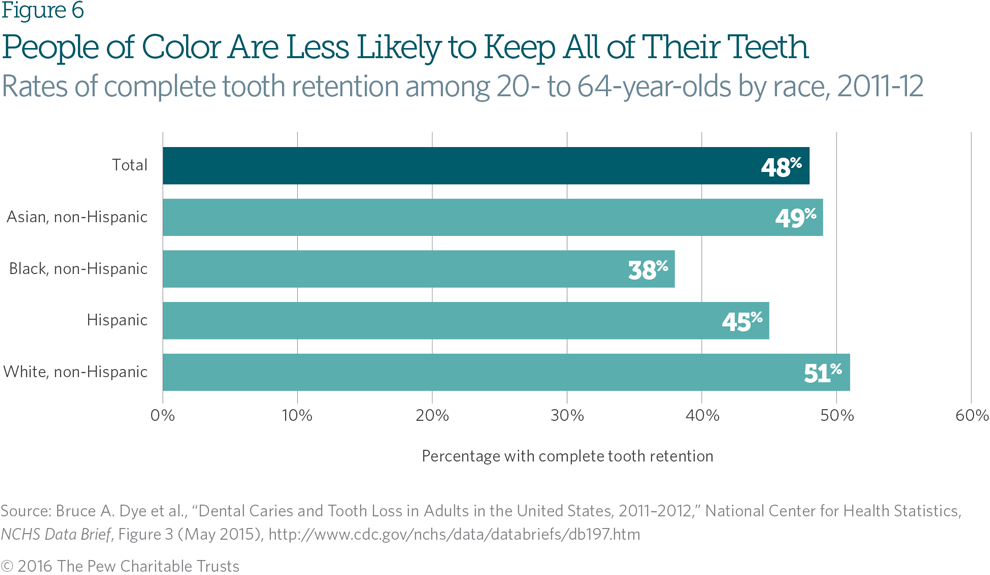 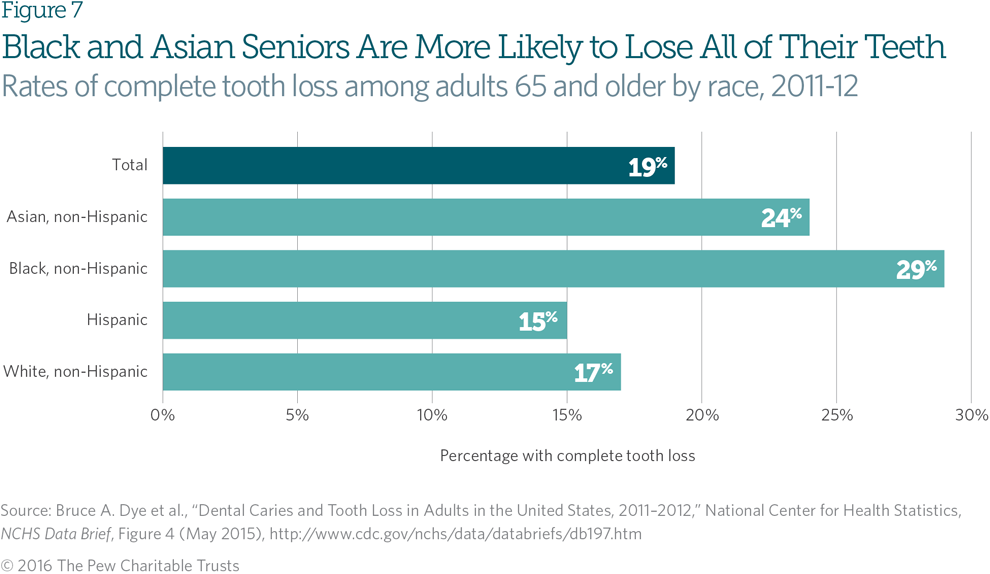 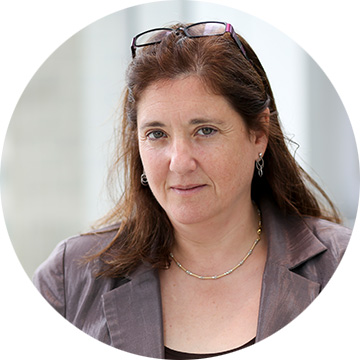