In 2014, the Department of Defense consumed more than 87 million barrels of petroleum fuels, enabling U.S. forces to operate worldwide. That enormous demand, however, could also be a vulnerability, according to the department’s 2016 Operational Energy Strategy, which updates the original energy strategy released in 2011.

The 2016 update is an important milestone, signaling new directions and showing the progress the DOD has already made toward energy security.

In the new strategy, like the earlier one, the bottom line is “consistent delivery of energy to the warfighter.” In other words, among the nation’s many important energy security goals, the one that drives the Pentagon is making sure American armed forces have the energy they need to defend the country. The strategy notes that the DOD will pursue that goal by building energy security into future U.S. forces, reducing energy risks to missions, and improving equipment and training.

One of the strategy’s new directions is a greater emphasis on the importance of air power. All aviation—not only the Air Force, but also Army helicopters, the Marine Corps Ospreys, the Navy F-18s, and other aircraft—accounted for 71 percent of the DOD’s petroleum use in 2014. That’s a useful fact for setting policy priorities. At the same time, volume isn’t everything: For a soldier in combat, a little energy efficiency can go a long way toward mission success. 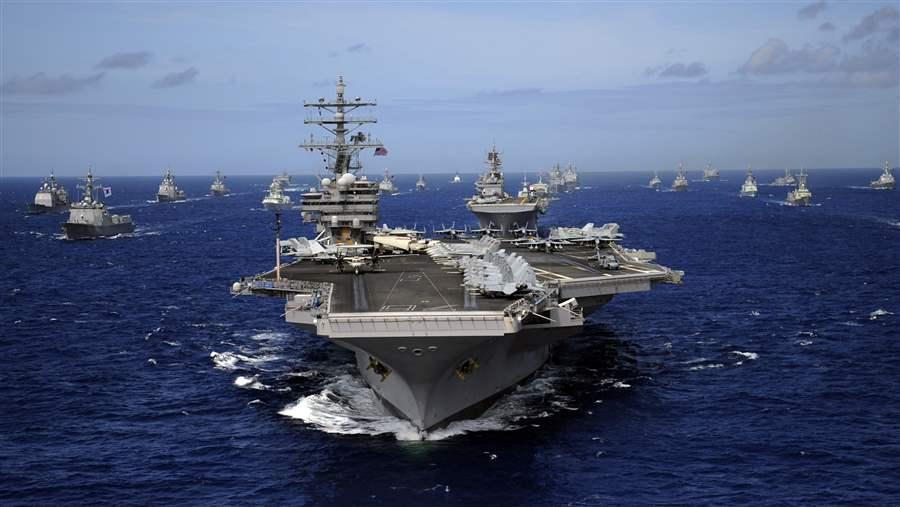 The aircraft carrier USS Ronald Reagan leads a formation of ships through maritime training on the Pacific Ocean.

The most important new direction in the 2016 strategy is the focus on the Asia-Pacific region. President Barack Obama has called on the U.S. government to shift, or “rebalance,” the nation’s strategic priorities to that area of the world, an order that has implications for DOD’s energy security because of what the strategy refers to as “the tyranny of distance.” U.S. Pacific Command in Hawaii is 3,800 miles from Guam, the next major U.S. base in the region, and another 2,000 miles from a key regional ally, South Korea. It takes a great deal of energy to move and support a modern military across such vast areas of open ocean. Unlike Afghanistan and Iraq, where much of the combat action has been on the ground, missions in the Asia-Pacific region, whether humanitarian or combat-related, will involve ships and planes, which consume far more fuel than ground forces. An Arleigh Burke-class Navy ship, for example, may consume 1,000 gallons an hour, according to one estimate.

In addition, the strategy notes that new equipment generally needs more fuel than older gear, which means the supply line is growing more substantial. It may also mean that U.S. forces need more tanker ships, planes, and trucks to move fuel, as well as additional locations to store it. At the same time, these supply lines may face more threats. Potential adversaries increasingly have precise and lethal weapons—including cruise and ballistic missiles, the strategy says—that can target supplies. And as the climate changes, volatile weather will also become a factor.

One of the strategy’s big milestones is the changing way DOD values fuel. In the past, military planners have often assumed that fuel would be where they needed it, partly because their logisticians were so effective. DOD is taking a closer look at these processes, including by conducting what the strategy refers to as Energy Supportability Analyses, scrutinizing military plans to make sure they truly consider what it will take to get fuel to the right place at the right time. The Pentagon is also enforcing an Energy Key Performance Parameter, which means military organizations have to take energy demand into account in the design of major new equipment. The purpose of these studies and tools is to understand how fuel demand affects the military’s ability to carry out a mission, not just how much it costs in dollars.

The collective effect of the changes in the strategy should be stronger demand for energy-improved equipment. This may mean more efficient aircraft engines and base camps; novel ways of producing energy, such as with fuel cells or solar panels; and even entirely different kinds of equipment, including unmanned systems and robotics.

Future versions of the strategy will perhaps take on a broader strategic and geopolitical context, such as assessing the risks of relying overly on Russia for fuel in Central Asia or the links between energy and stability in partner nations or in combat scenarios. These strategic issues have been important to U.S. missions in Iraq and Afghanistan and are likely to be even more so in the Asia-Pacific region.

A new opportunity may also exist to include electricity in future iterations of the strategy. In 2015, DOD folded the operational energy office into the installations assistant secretariat, which traditionally has responsibility for military electricity issues. Electricity is increasingly critical for the information age military, whether generated on board a ship, plane, or vehicle by the engine or on a base by a generator or civilian grid. Both kinds of energy could be considered “operational” and are critical for military missions.

In any case, the 2016 strategy is a forward-looking report that signals the DOD is taking this issue seriously: The last page features an implementation table, showing how the Pentagon intends to drive forward toward energy security.