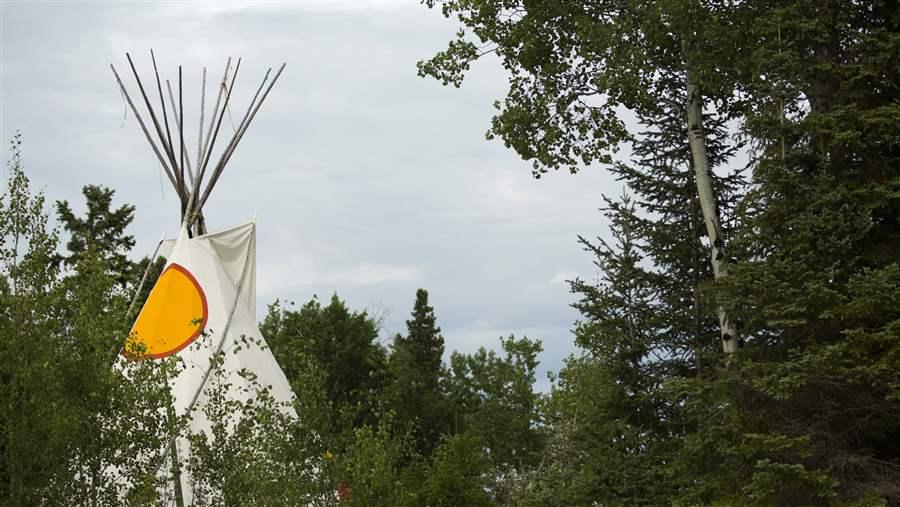 A traditional tipi rises above the trees at Poplar River First Nation in the boreal forest in Manitoba.

In the 46 years since the first Earth Day celebrations in 1970, the event has become a vital annual reminder of our collective need to respect the planet, and an opportunity to reflect on our relationship with its ever-more-fragile environment.

Indigenous peoples who live in Canada’s boreal forest have been guardians of the region’s land and waters for millennia.  Their stewardship and cultural perspective point the way toward a more sustainable future for all of us.

Today the boreal remains one of the largest intact forest ecosystems on Earth, in large part because of Indigenous communities guided by a conservation ethic rooted in traditional knowledge and science that has been passed down through generations.

The cultural and spiritual lives of Indigenous people are intricately tied to the natural world they inhabit: The land and the people are the same.

Some of the biggest recent conservation gains in Canada have been achieved thanks to innovative land use planning by, and leadership of, Indigenous communities. Successes include protection of 6.4 million acres of boreal forest in the Thaidene Nene region of the Northwest Territories—in parks to be co-managed by the Dene community of Lutsel K’e—and creation of the 2.6 million-acre Mealy Mountains National Park on traditional Innu territory in Newfoundland and Labrador.

In Quebec, the Cree have led efforts to protect the Broadback River Valley, one of the province’s last intact tracts of boreal forest. In Manitoba and Ontario, five First Nations are pursuing UNESCO World Heritage recognition for the 8.25 million-acre Pimachiowin Aki site.

One of the most promising Indigenous-led conservation initiatives is an emerging effort to establish “guardians” programs to train and hire young leaders to help protect the cultural integrity of boreal peoples and the ecologies of their lands and waters.

To celebrate Indigenous leadership on Earth Day, I spoke with Valérie Courtois, director of the Indigenous Leadership Initiative (ILI), one of Pew’s partners in the international boreal conservation campaign. ILI’s goals include supporting First Nations efforts to develop the skills and capacity needed to fulfill Indigenous cultural responsibility for their traditional lands and working to implement the vision of the Canadian Boreal Conservation Framework, which calls for a balance of conservation and sustainable development. Courtois is Innu, from the community of Mashteuiatsh in Quebec.

Q: Can you describe the approach Indigenous people have taken toward conservation traditionally, and how that is being applied in modern-day land use planning in the boreal forest? 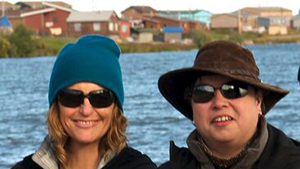 A: Indigenous peoples have a conservation ethic that is innate and is a very logical and natural thing. Without lands, there would be no Indigenous peoples. So that has translated into the whole spiritual relationship that Indigenous peoples have with their lands. It’s an understanding of where your place is in the world. From an Indigenous point of view, at least from my own Innu spirituality point of view, that means we are but a part of something bigger. We have a duty to recognize and respect everything else around us, and also to respect that nothing is better than the other thing. Each part is important for the whole. That translates into the way that First Nations consider the treatment of land and the opportunities for development. Tools like land use planning are so important for First Nations in determining what their future looks like. It is an expression of our cultural responsibility towards lands. For myself as an Innu woman, that means things like making sure that caribou have the land that they need in order to continue to exist. Caribou are one of the most important wildlife species for Innu and are at the center of our spiritual understandings of nature. Land use planning is a way for us to translate that kind of cultural, spiritual value into something that looks like a modern land use plan.

Q: How would you describe the growing role that Indigenous communities are playing in determining land use plans for their own communities, within the larger context of planning the future of conservation and development in the boreal forest?

A: Since the early 1970s, we’ve seen an evolution of recognition of Indigenous rights and title here in Canada. First Nations and Inuit and Metis people in Canada have overwhelmingly won court cases recognizing rights and title. The Tsilhqot'in case was the first time that the Canadian courts recognized and defined the concept of aboriginal title in Canada. There is not only responsibility because of rights but also responsibility because of title being developed by First Nations. Our experience as an Indigenous Leadership Initiative is that, when those conditions exist, they tend to lead to very innovative and dynamic land management systems. When we have areas under First Nations decision-making, that tends to result in a much more conserved landscape. It tends to result in some really interesting development of tools specific to local realities, like how you manage caribou herds, or how you manage carbon cycling. If you look at locations where First Nations have control over lands, they have conserved well over 50 percent of those lands. 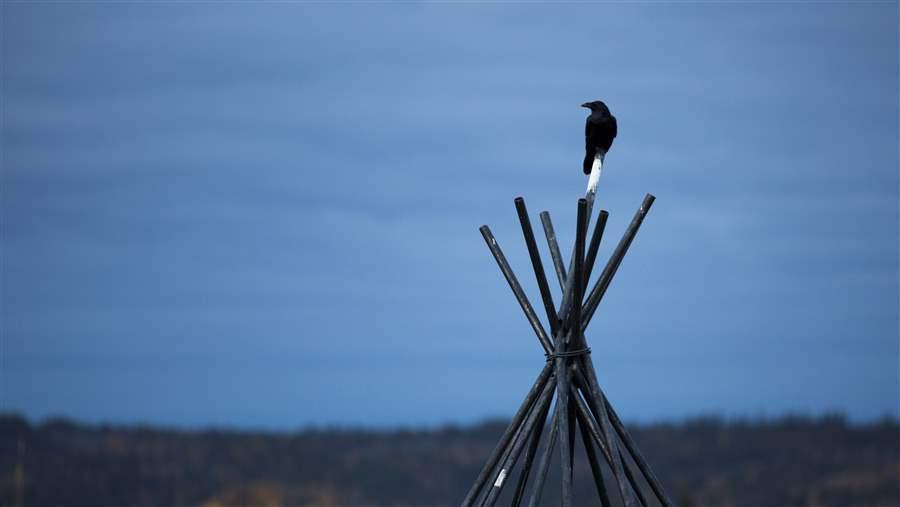 A raven perches atop a tipi frame in Yellowknife, Northwest Territories. The Canadian territory has been a leader in boreal conservation and Indigenous land use planning.

Q: Why do you feel it’s important that the future of land use planning and conservation for the boreal forest be determined in partnership with Indigenous peoples?

A: If Canada is going to fulfil its responsibility to the globe, with respect to conserving ecosystems, then it is going to have to offer bold solutions. Luckily, Indigenous people are bold in their land management solutions, because the survival of our culture is at risk if we fail.

Q: What are some conservation success stories, places where First Nations have been innovative in terms of creating innovative land use plans that protect the boreal forest?

A: The highlight area where this is really playing out is in the Northwest Territories. It is a territory that was previously under federal government control and has now devolved towards [control by] territorial government. The First Nations of the Northwest Territories have been working on long-standing land claims processes that have led to the creation of Indigenous governments that have done some really cool work in creating co-management systems. It has resulted, to me, in the best-conserved jurisdiction in Canada through the Northwest Territories protected areas strategy. The way Thaidene Nene National Park Reserve was negotiated has allowed Lutsel K’e to address issues of land and culture without being bogged down into a much larger and onerous processes like land claims. Another place to look is in Labrador, where I live. The Innu Nation has done a really good job of expressing their desires for the futures of their land. The Innu successfully negotiated one of the only co-management agreements on forestry with a provincial government way back in 2001. That agreement has really set the stage for the creation of a much more sustainable forest industry in Labrador. 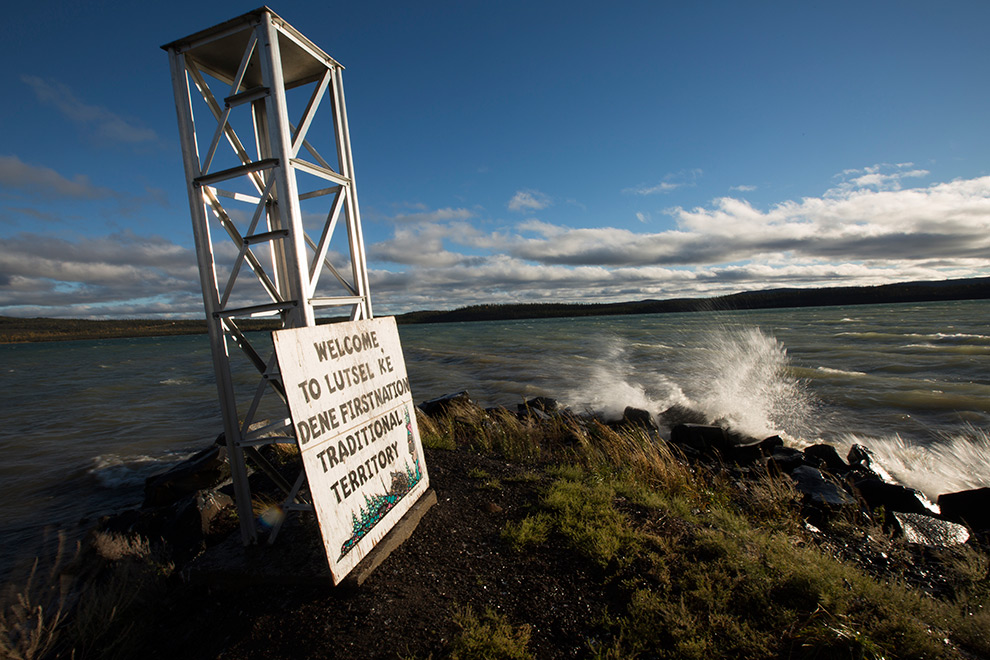 A sign welcomes visitors to the Dene community of Lutsel K’e along Great Slave Lake in Canada’s Northwest Territories. Lutsel K’e Dene First Nation will co-manage two new parks, one with the federal government and one with the territorial government, covering 6.4 million acres.

Q: What are “indigenous guardians,” and why do you view them as part of the future of conservation and sustainable development in the boreal?

A: The guardians are community members who have a recognized responsibility for managing lands, resources, and peoples on the land; they are essentially a community’s eyes and ears on the ground. Guardians are trained to monitor ecological health, maintain cultural sites, protect sensitive areas and species, interpret culture and heritage aspects to visitors, contribute to land planning and management decisions, and stimulate and share Indigenous knowledge with younger generations. They cultivate Indigenous leadership and management now and into the future.

Guardians are uniquely positioned to help address some of the key environmental issues of our time such as biodiversity protection, recovery of species such as caribou, water quality, and wildlife and climate change impacts, including forest fire management. Indigenous guardians can also play a critical role in the creation and management of national parks and park reserves across the country.

In Labrador, the Innu Environmental Guardian program employs up to 18 people and has resulted in the Innu people having the largest environment office in the country. They are making sure that what is contained in management and land use plans actually gets implemented. Guardians programs are similar to the Aboriginal Rangers programs in Australia, which have been very successful in protecting traditional lands, creating employment, and improving social conditions for Indigenous people.

Q: How difficult is it to strike a balance between conservation and sustainable resource development that can bring jobs to Indigenous communities?

A: Part of it is a lifestyle description. The reason why large areas of land tend to be conserved is because it takes large landscapes to be aboriginal. I’ll speak from my Innu point of view: We are a caribou people. Caribou are probably one of the most wide-ranging migratory species. They move almost 100 kilometers per day. In order to interact with caribou, you need very, very large landscapes. Caribou are very sensitive to any kind of harassment and disturbance. That means making a choice, perhaps, between the bigger buck and the balance in lifestyle. We’ve found that First Nations will tend to choose development projects that bring their standard of living up to a point that is acceptable and that will facilitate the expression of culture. It’s not about making the most money as possible. It’s figuring out how much money we need to be a thriving people and to have a thriving culture. That’s really where the decisions are made. 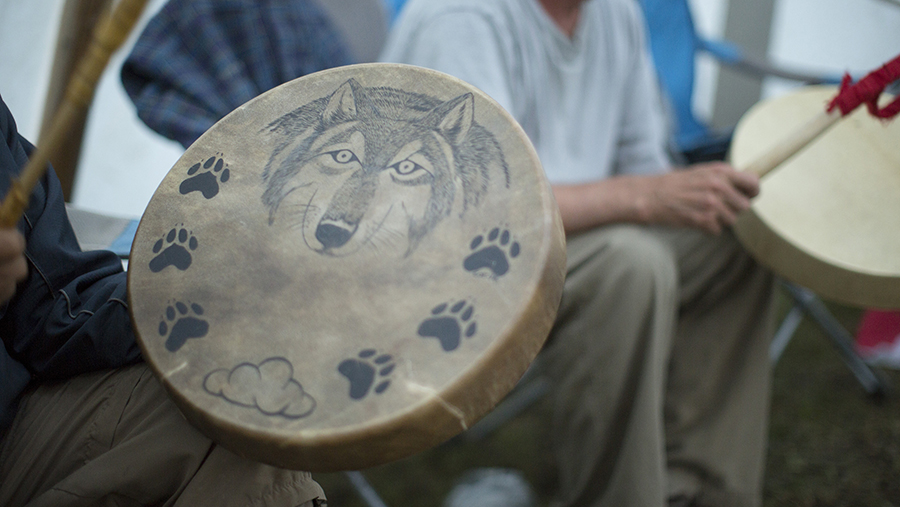 Members of the Poplar River First Nation in Manitoba play drums during a pipe ceremony. Poplar River is located within one of the largest tracts of intact boreal forest in Canada.

Q: How do you feel the boreal region will benefit from having Indigenous peoples take a more prominent role in shaping its future?

A: The boreal is one of the most important terrestrial ecosystems on the planet in terms of its role in regulating global climate. Because of our cultural values, Indigenous people feel a responsibility to care for the land. There are prophecies within our culture that say that one day people of the world will look to First Nations in the boreal for solutions and protection from the impacts of bad decisions and destruction of lands. Not only do Indigenous people see a personal responsibility to the land, but we also feel a responsibility for everybody else.