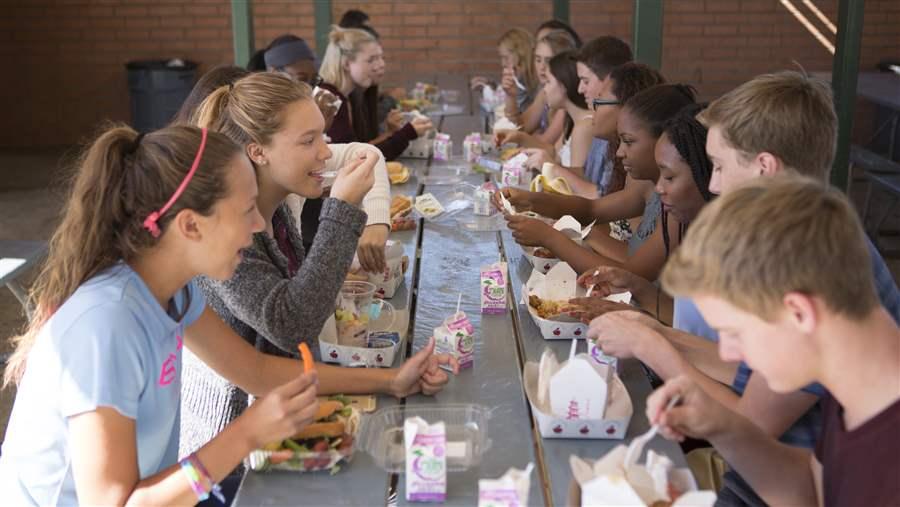 A bill to reauthorize child nutrition programs, recently introduced by members of the House Education and Workforce Committee, could weaken healthy standards for school breakfasts, lunches, and snacks.

This Q&A was updated April 22, 2016, to reflect the introduction of a House bill to reauthorize federal child nutrition programs.

The House Education and Workforce Committee is considering the Improving Child Nutrition and Education Act of 2016 (H.R. 5003), which was introduced on April 20. The bill is part of Congress’ periodic renewal of child nutrition programs and would make substantial changes to the National School Lunch and School Breakfast programs, as well as snacks offered in more than 95,000 schools each day. Jessica Donze Black, director of Pew’s child nutrition project, answered questions about the bill and the current school food landscape.

Q: Congress’ last child nutrition reauthorization, in 2010, led to healthier standards for school meals and snacks and a larger reimbursement to schools for each lunch served. How are these programs faring now as lawmakers review them again?

A: The 2010 law has helped schools serve a wider range of nutritious and appealing choices than ever before and ensure that all food and drinks sold on campus support kids’ well-being. Recent studies show that students are eating more fruits, vegetables, and healthy entrees, which is remarkable considering that some of the stronger standards took effect less than two years ago.

Many school nutrition leaders had long wanted to raise the nutritional quality of their menus, and in advance of the updated rules began making gradual changes and involving students in the process. Their strategies have helped maintain or even expand children’s participation in meal programs in thousands of districts, and their successes confirm that improving kids’ nutrition and programs’ financial health can go hand in hand.

Does the House bill keep schools moving in this healthy direction?

We appreciate that the House is making a child nutrition bill a priority. School meal programs can achieve even more success with the additional resources Congress could provide by passing a bill this year.

Unfortunately, many provisions in the House legislation are at odds with the progress we’ve seen. That’s particularly disappointing given that the Senate Agriculture Committee crafted a bipartisan child nutrition bill that would help schools build on their gains and remove obstacles to further improvement. The House bill would essentially roll back certain science-based standards for meals and snacks so that schools could sell food with little or no nutritional benefit.

How would the House bill undo some of the progress you described?

One serious concern is that this proposal would weaken nutrition standards for food sold in cafeteria a la carte lines. For example, today desserts such as cookies, cake, and ice cream may be offered as part of a balanced meal or sold separately as a snack if they are within calorie, fat, and sugar limits. The bill would toss out guidelines for foods sold a la carte, allowing schools to fill serving lines with less healthy versions of these “occasional” treats. Children as young as 5 could go from having cookies or fries with their lunches once in a while to buying and eating them every day.

It’s very likely they would. Although the bill would not directly modify rules for full meals, the legislation instructs the U.S. Department of Agriculture to regularly review school meal program regulations, including nutrition standards, and revise them if school administrators report that compliance has increased their costs or discouraged student participation in meal programs. So, although 98 percent of districts are already meeting lunch requirements, claims of hardship from a few could force the USDA to lower the bar for all schools.

The USDA’s current approach to assisting struggling programs is the right one: The department offers free training, technical assistance, and other resources to help districts serve healthy meals and overcome budget issues, which may be related to local decisions about workforce policies, meal prices, menu design, and other factors. The House bill would essentially allow the least successful programs to drive the nation’s school nutrition policies. And that would be a big step in the wrong direction.

Current nutrition standards also encourage limits on fundraisers that sell unhealthy food during school. Is that issue addressed in the bill?

Yes. States already have the authority to determine how often to exempt on-campus food-based fundraisers from national nutrition standards, and 46 have taken action in recent years to establish or revise their rules. Meanwhile, many districts have been inspired to choose fundraising activities that promote student and community wellness such as walk-a-thons and sales of plants or fruit rather than candy or pizza. The proposal would remove the national guidelines that many states have referenced in their policies, which could complicate state and local efforts to promote healthy fundraising practices.

The bill also offers exemptions from nutrition standards for four “family days” a year. Is that something schools need?

We strongly encourage schools to invite parents and families to eat meals with their children, but there is no reason to make those menus less nutritious than the meals they serve every day. What message would it send to students if schools implied that they should not eat healthy foods with their families?

The 2010 child nutrition law allows some schools to offer free lunches to all students through the Community Eligibility Provision. Would that continue under the proposed bill?

The legislation would reduce the number of schools eligible for this provision, which has been shown to limit the paperwork required of schools and families, reduce error rates in program applications, and combat hunger by increasing children’s participation in meal programs. Currently, if 40 percent or more of a school’s students receive aid from other federal food or antipoverty programs, the school can opt to offer free meals to all students. The proposal would raise the threshold to 60 percent of students, requiring thousands of schools to go back to collecting and processing free or reduced-price lunch applications from each family.

Would any elements of the bill help schools serve healthier meals and snacks?

The bill does prioritize some important investments in school nutrition. The federal reimbursement for breakfasts would rise by 2 cents per meal. (For most districts, current reimbursement rates range from 29 cents per student who pays full price to about $2 for each student receiving a free meal.) The legislation also would help districts get access to more federal assistance to renovate outdated and poorly equipped kitchens and cafeterias.

About 9 in 10 school meal programs need at least one additional piece of equipment to serve lunches that meet today’s nutrition standards, and over half need infrastructure improvements such as electrical and plumbing upgrades. The reauthorization bills proposed in the House and Senate include core pieces of the bipartisan School Food Modernization Act, which would authorize federal grants to help schools purchase food service equipment and low-interest loans to help pay for more extensive kitchen remodeling.

What next steps would you recommend as Congress moves forward?

We strongly encourage the House and Senate to build on areas of relative agreement between their bills, such as support for school kitchen equipment, and to take advantage of the bipartisan interest in reauthorizing child nutrition programs this year.

Schools have a huge opportunity—and responsibility—to help the nation’s children grow up healthy. For every 10 students, six get lunches from their schools, four get snacks, and about three receive breakfasts. Voters with children in public schools support the current nutrition standards by a 3-1 ratio. We hope House members will listen to parents, reconsider provisions that would reduce the nutritional quality of food served to students, and pass a bill that helps all schools meet high standards.