Most national studies of recidivism have focused on state-level inmates, who make up the bulk of the country’s incarcerated population, while overlooking the more than 54,000 offenders who leave federal prison each year. But in March, the U.S. Sentencing Commission, an independent judicial agency that sets sentencing policy and conducts original research, took a major step toward closing this information gap.

The commission released a study of reoffense rates among more than 25,000 federal offenders who left prison or began serving probation terms in 2005.1 The analysis tracked each offender for eight years to determine rates of rearrest, reconviction, and reincarceration, whether in a local, state, or federal facility.

The study reinforces what state-level data have long shown: Recidivism is common. Nearly half of the offenders tracked—49.3 percent—were rearrested within eight years for a new crime or for one or more technical violations of their supervision conditions, almost a third (31.7 percent) were reconvicted, and about a quarter (24.6 percent) were reincarcerated.

Beneath the report’s discouraging overall findings, however, are other important takeaways that members of Congress and other policymakers should consider as they discuss ways to improve public safety outcomes and reduce the size and cost of the federal prison population after more than three decades of explosive growth.

Most recidivism by federal offenders is nonviolent

Fewer than a third of the rearrested offenders were detained for violent crimes; more than two-thirds were apprehended for larceny, fraud, drug possession, and other nonviolent offenses. (See Figure 1.) Understanding the exact nature of federal offenders’ recidivism can help lawmakers and other government officials make informed decisions about release and supervision policies and practices. 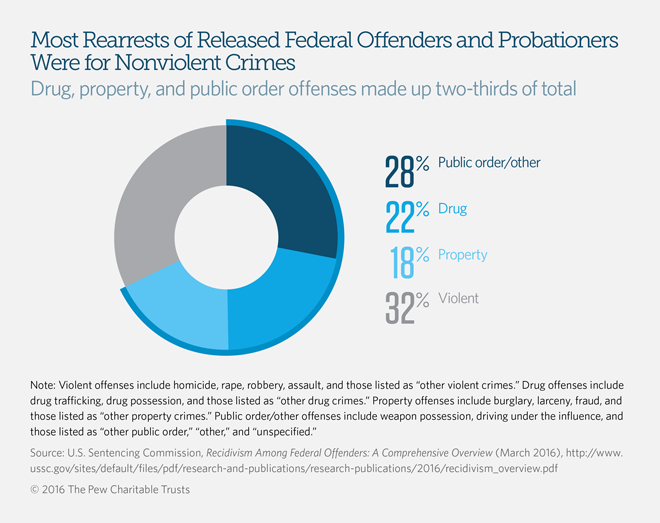 Most reoffending occurs within two years of release

Nearly 17 percent of rearrested offenders were detained during the first year of the follow-up period, compared with less than 2 percent in the eighth year. The median time between release or start of probation and first rearrest was 21 months. The commission’s findings align with research showing that supervision can have the greatest impact in terms of crime prevention when it is concentrated on offenders who have recently re-entered the community.

Older offenders are far less likely to be rearrested

Recidivism rates decreased steadily with offenders’ age. Fewer than a quarter of those who were between the ages of 51 and 60 when they were released from prison or began probation terms—and fewer than a fifth of those who were older than 60—were rearrested. The analysis suggests that many older offenders can be safely managed in the community—an especially important finding at the federal level, where inmates 50 and older represent the fastest-growing segment of the prison population.

Longer sentences are not associated with lower recidivism rates

Rearrest rates among federal offenders in the study remained relatively constant—between 51 percent and 56 percent—regardless of the length of their original prison or probation sentences. Those sentenced to less than six months were the only exception: Their rate was the lowest overall, at 37.5 percent.

When policymakers evaluate the effect of sentence length on recidivism, they should consider additional factors that may play a role. Those sentenced to less than six months, for example, are likely to have committed less serious crimes and to have minimal criminal records, meaning that they are unlikely to be substantial recidivism risks regardless of the penalties they received.

Nevertheless, the commission’s analysis is consistent with earlier research showing that long prison terms have little impact on public safety outcomes. The National Research Council, for example, concluded in a major 2014 report that “statutes mandating lengthy prison sentences cannot be justified on the basis of their effectiveness in preventing crime.” Of course, longer sentences can serve other legitimate purposes, including punishing offenders and incapacitating those who might have committed additional offenses had they not been incarcerated.

As members of Congress and other policymakers consider proposals to scale back the size and cost of the federal prison system, the Sentencing Commission’s study can serve as a roadmap for best practices. More than 97 percent of the nation’s federal inmates will eventually be released, so it is imperative that lawmakers understand the frequency and nature of recidivism and allocate resources in a way that maximizes public safety.

Adam Gelb directs and John Gramlich is an officer for the public safety performance project at The Pew Charitable Trusts.